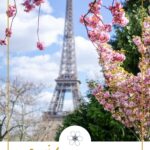 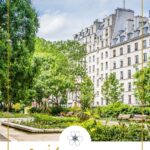 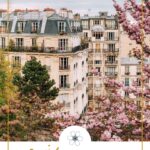 I have 2 favorite months for visiting Paris: April and October. And while I have been to Paris n every month (and over 50 trips in total) I have been to Paris the most during these 2 months. April in Paris is magical. The weather is generally good, if the various months were bears in Goldilocks and the 12 Bears, April would be the baby bear that is “just right” existing between it being too cold and too hot!

When the musical goddess Ella Fitzgerald sings about April in Paris, every traveler’s heart sings, at least the ones that are familiar with Paris!

Paris holds a beauty that captures the imagination every day of the year, but April adds something magical to it. April brings misty mornings eclipsed by sunny afternoons, swelling birdsong, and the scent of freshly blooming flowers to the City of Light.

Here are just a few reasons to visit Paris in April.

This post is being published in April 2020 at which time no one is traveling to Paris (at least not tourists!) but people are starting to see the light at the end of the tunnel for travel towards the end of 2021, so April 2022 IS possible! 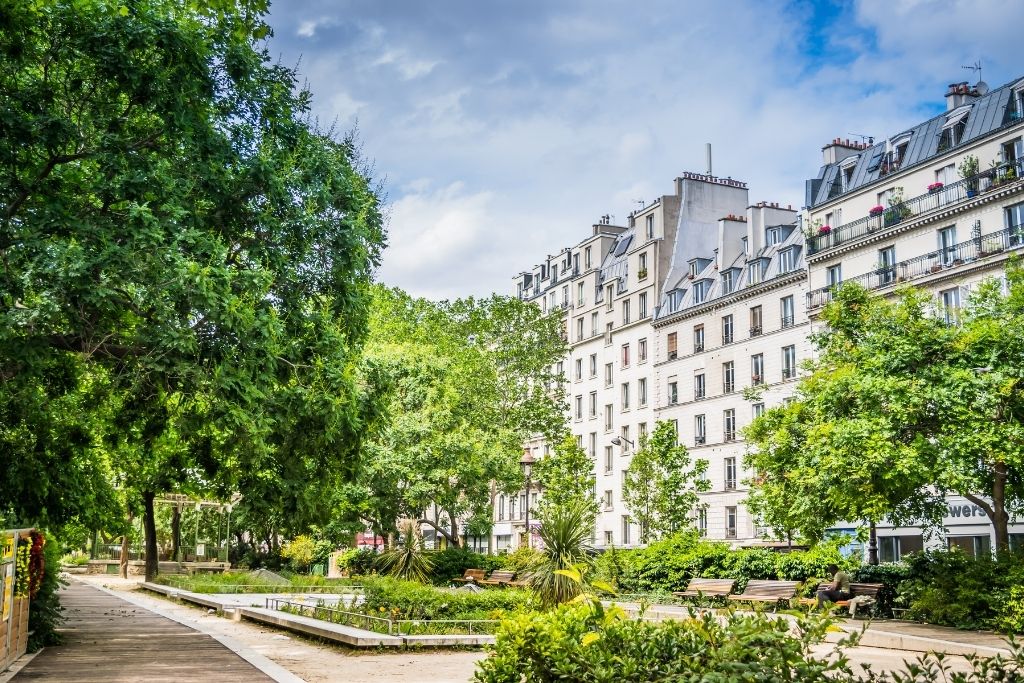 Why should you visit Paris in April? 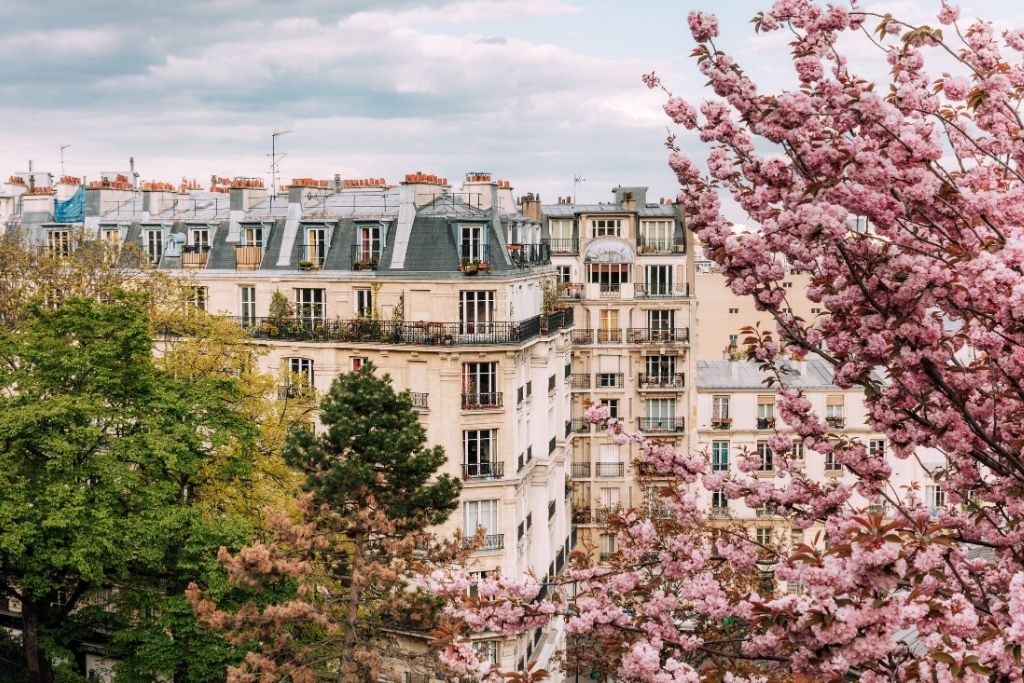 What can you do in Paris in April?

There are thousands of things to do in Paris every day of the year. The benefit of visiting Paris in Spring? You get to enjoy the indoor offerings while still having beautiful weather to enjoy the outdoors as well! When visiting Paris, consider picking destinations and attractions that fit a variety of interests because, as previously mentioned, there truly are tons of things to do in the city!

Visit some of the many parks and gardens 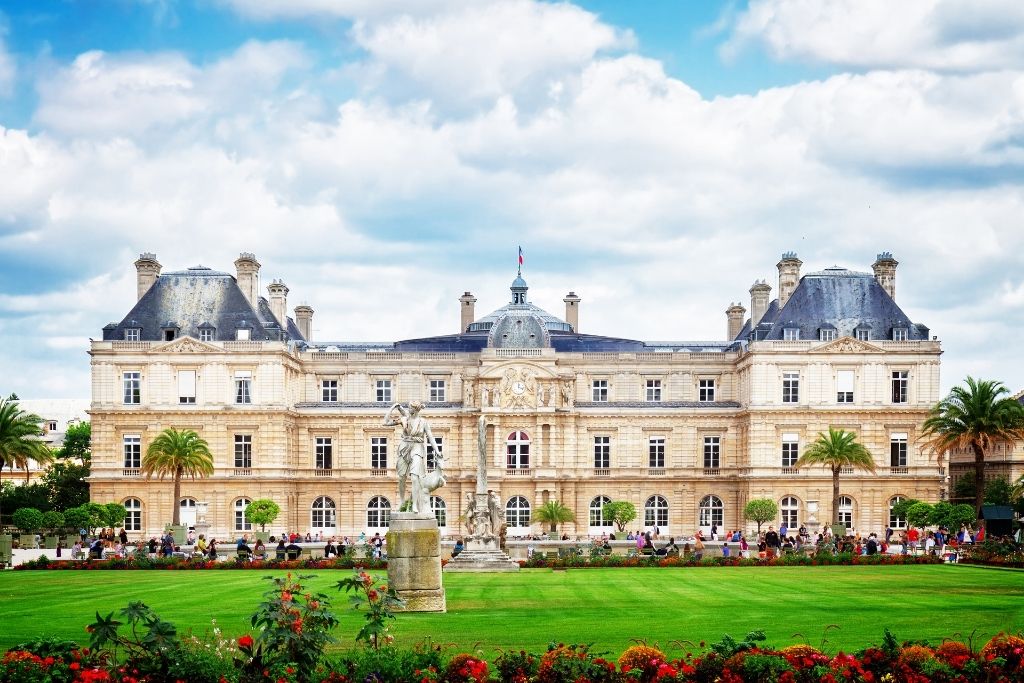 The parks and gardens of Paris never disappoint. In April, there are no hordes of tourists cramming through the trails and paths of the gardens. You can enjoy strolling beneath the linden trees and cherry blossoms without feeling rushed in one of Paris’ many parks or gardens. 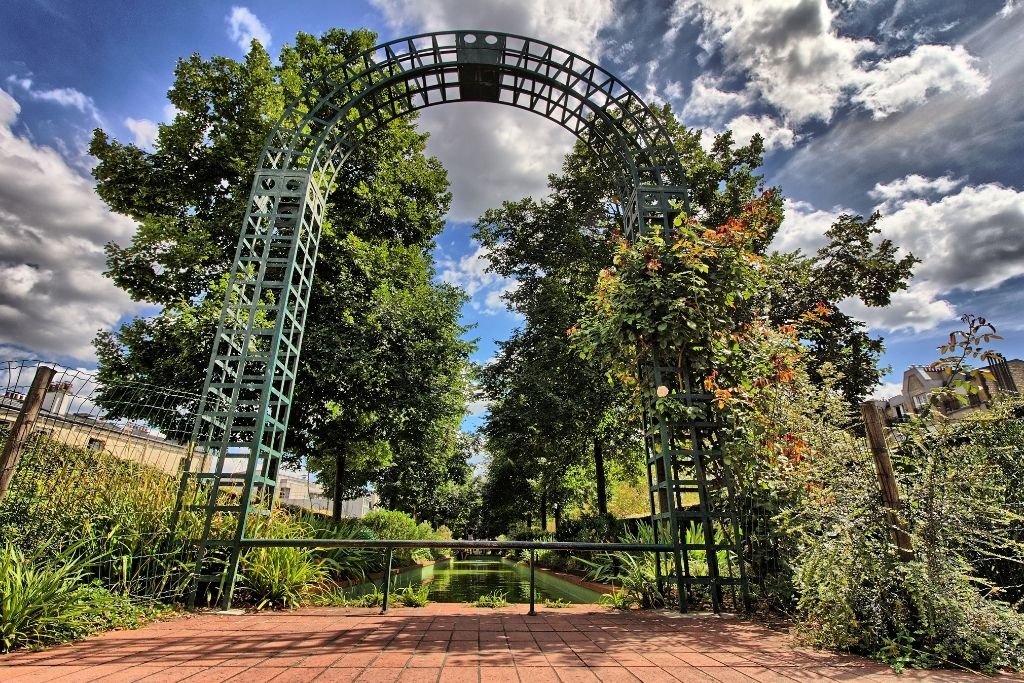 Spring is the perfect time to visit la Promenade plantée (also known as Coulée verte René-Dumont) raised railroad track (which was in disrepair until it was converted to this walkway in 1993) with flowers galore! Get a fantastic view of the city as you stroll along this 2.7 mile/4.5km elevated walkway with tons of green space. Located in the 12th arrondissement and you can find it along Avenue Daumesnil very close to the Bastille metro. 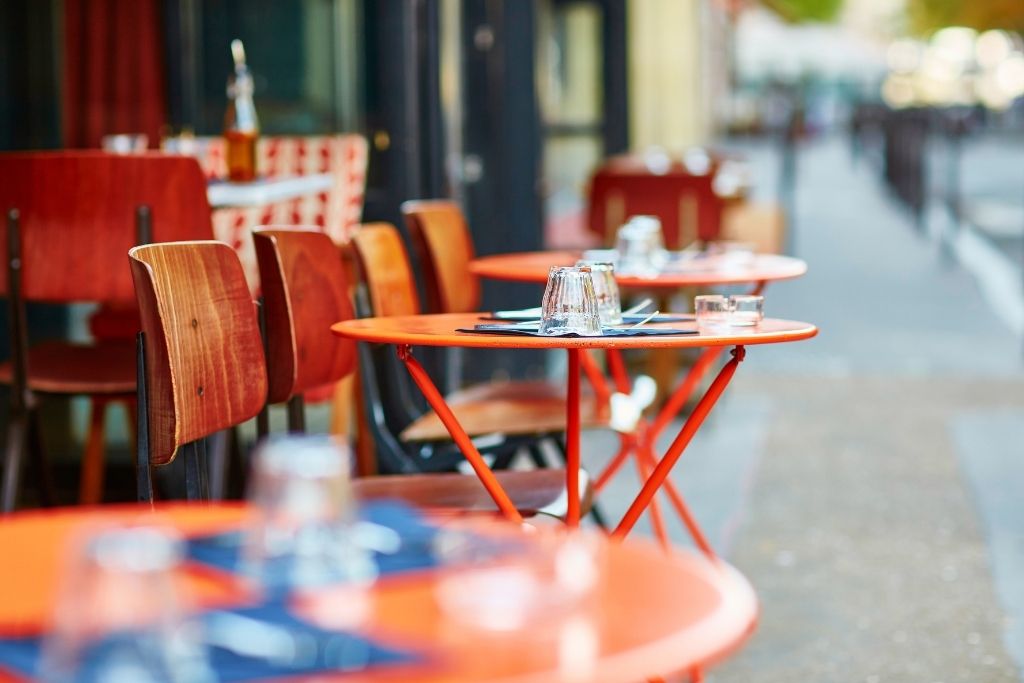 Nothing screams Parisian breakfast more than café crème and a croissant. Of course, cafés are open all year round, but April is the first month you can sit outside on the terrace (or sidewalk) without freezing or sitting under a heat lamp! Eat like a local and find a small corner café to sip espresso and read Le Parisien paper, or discover one of the popular breakfast restaurants like the organic offerings at Chambelland or enjoy the fine offerings at Blé Sucré. Check out my guides if you aren’t sure how to order your coffee in Paris or what to eat for breakfast. 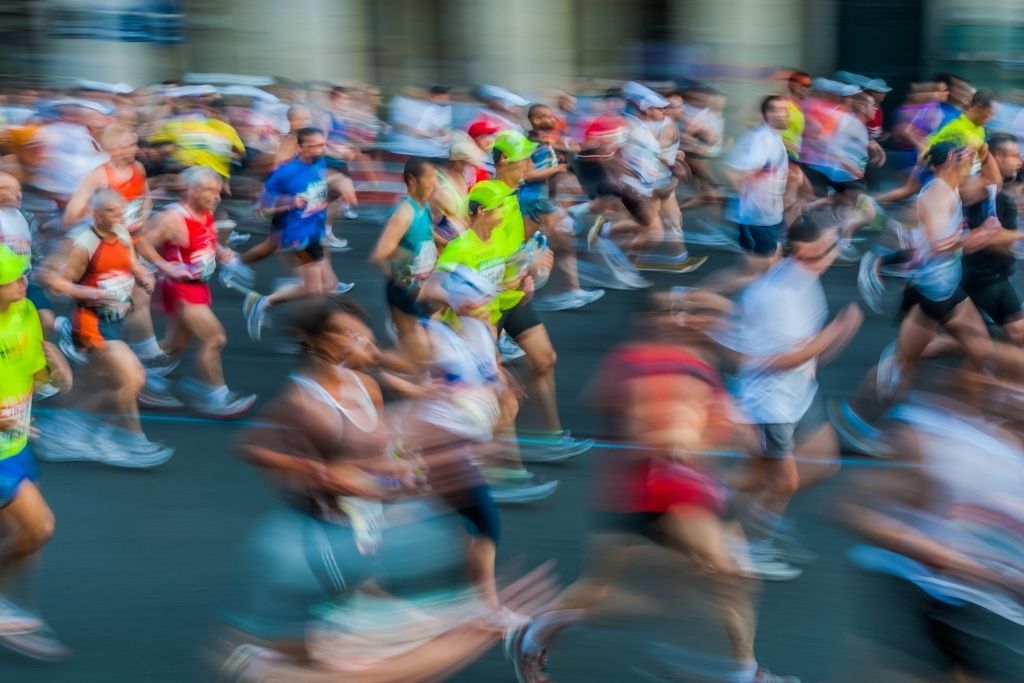 The Paris Marathon is one of the largest in the world with as many 65,000 runners from all over the world taking part in this race that weaves through the city of Paris. It starts at the Arc de Triomphe and finishes at Avenue Foch in the 16th Arrondissement. If you are visiting Paris in April you should be aware of what day the marathon falls on because it can impact your ability to get around some of the major city streets.

April Showers…things to do in Paris if it rains

April showers do exist so you will need a rainy day Paris plan. Head to a historic covered passage, join a cooking class (might I suggest La Cuisine Paris) or explore a museum (I love the Orsay).

Culinary Delights of April in Paris

Oh, you know me. This is always my favorite part! No trip to Paris is complete without a deep exploration of all the eats. You should definitely try the classics, but don’t forget the season as well!

What to eat in Paris in April 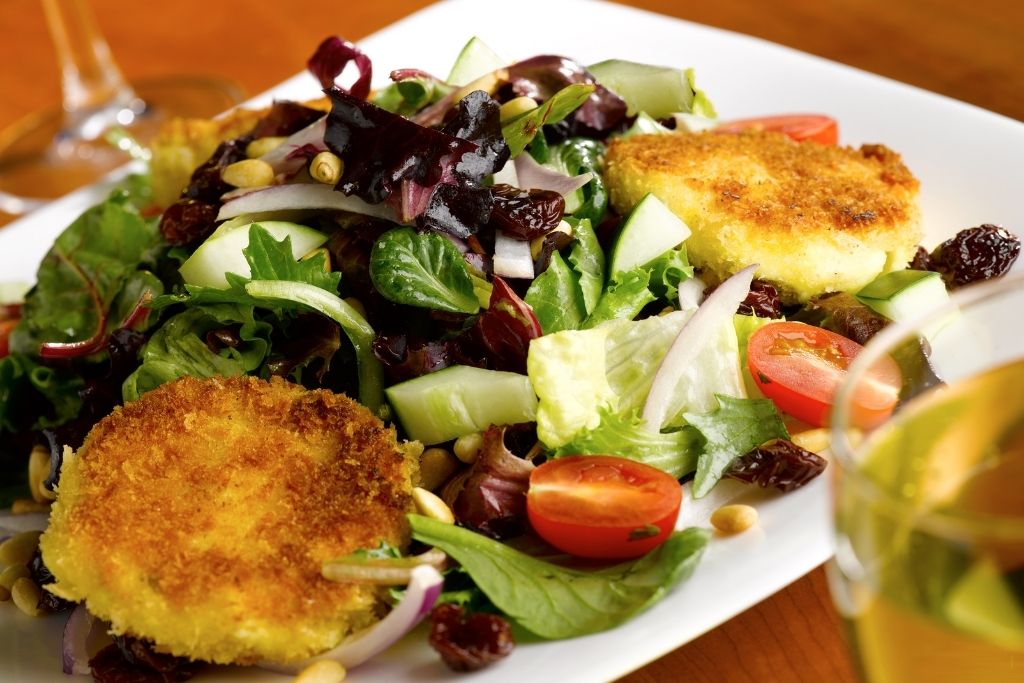 Many restaurants offer season menus so it is always good to know what is actually in season! Paris has many tastes to experience, but during the spring there are some seasonal specialties. If you visit the marchés (farmer’s market) you will see many of these items listed below.

Paris restaurants can be expensive, and while it’s worth splurging on one good meal, you don’t want to blow your entire travel budget just on food. Luckily, you can find a lot of treats at the local markets (here’s the etiquette). You can also ask the hotel staff or locals to recommend small cafes and bistros that they go to. This may save you from “tourist rates” and will definitely have good food. April is wonderful for picnics (just be careful of wet grass.). Buy at the local market and head to one of the 9 ideal picnic spots in Paris. 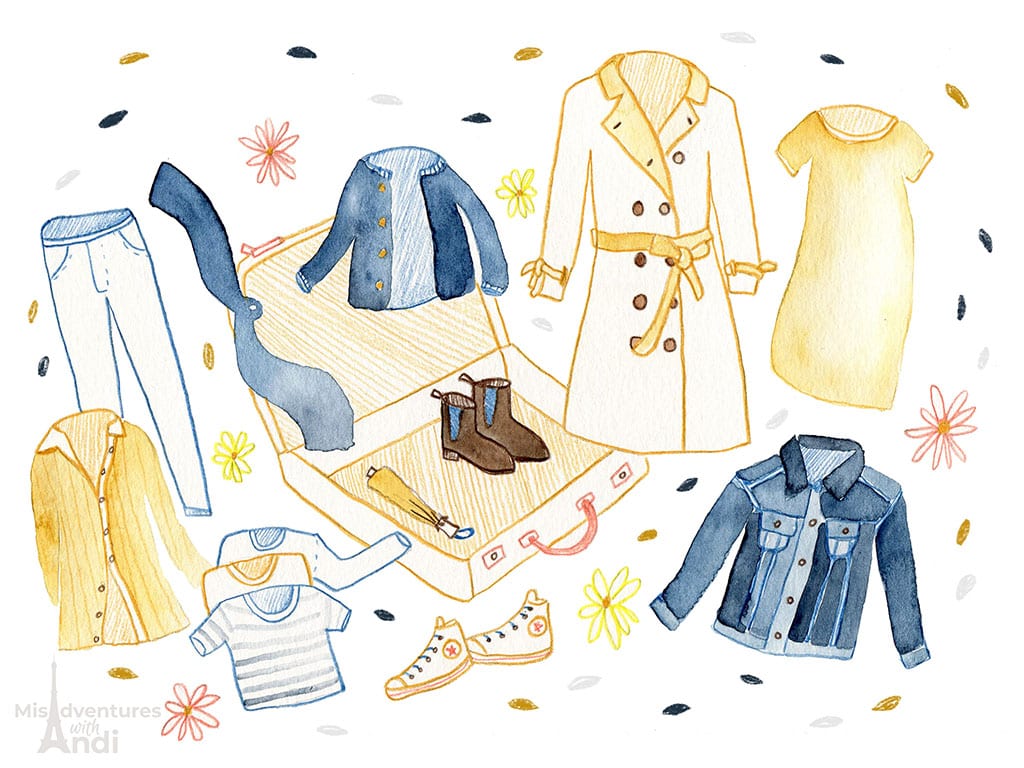 I have a full post on what to pack and wear for spring in Paris, make sure to check that out. Rain frequently falls in Paris during April. Pack a light rain jacket, comfortable pants and shoes, and an umbrella for your trip. Mornings can be cold, and then gradually becomes warmer as the day passes. So, it’s best to wear a scarf and dress in layers, so you can shed the jacket at the end of the day.

School children are on vacation for Spring Break between the beginning of April and early May, so make hotel and transportation reservations ahead of time.

While walking around Paris is certainly one of the best ways to really enjoy its culture and architecture, taking public transportation can help save time—especially if you want to maximize your stay. Your hotel can provide you with a map of the metro, and most establishments will list the name of the nearest station.

I share this in my Paris for the First Time post, my market etiquette post, and my Paris dining post. Don’t arrive in France without knowing a word of French. Two words specifically: BONJOUR (hello) and MERCI (thank you). Be sure and learn the basics: “please,” “police,” “emergency,” “bathroom.” etc. (here is a guide to bathrooms in Paris).

Many hotels, airlines, and travel agencies provide trip itineraries and travel packages for tourists. However, keep in mind that while these simplify the planning of a trip, travel packages seldom explore the haunts and hole-in-the-wall locations that Parisian locals prefer. Make time to explore away from the mainstream and the off-the-beaten-path while in Paris.

Why is April the best time to visit Paris?

Bar-none, April is the best month out of the traditional tourist season to visit Paris. You’ll miss the crowds, costs, and stress that comes with visiting during peak season in the summer, while still enjoying the vibrant scenery, activities, and cuisine Paris has to offer.

Have you ever visited Paris in April? What was your experience? Did you go to any events? Do share!

For a visual summary of this post, check out my April in Paris web story!

Paris in Spring is ON MY LIST, and now you have convinced me that in Spring it should be April. I would love the shoulder season with fewer people, the beautiful Spring blooms, the cafes and the museums. Love this post! Thank you

I must agree with you, visiting Paris in April is just the perfect amount of warmth and a cool breeze.

I've been to Paris several times, but never in April. How lovely it sounds, and your photos are beautiful.

Paris looks beautiful in the spring time with all of the blossom trees. Great tip for bringing layers - I probably wouldn't have thought of that!

I've always been wanting to visit Paris. It is a dream! Lots of reasons and lovely places to see.