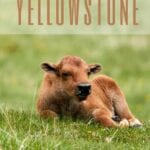 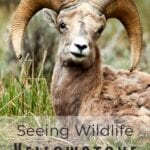 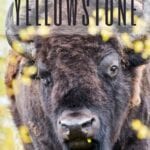 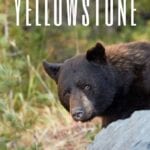 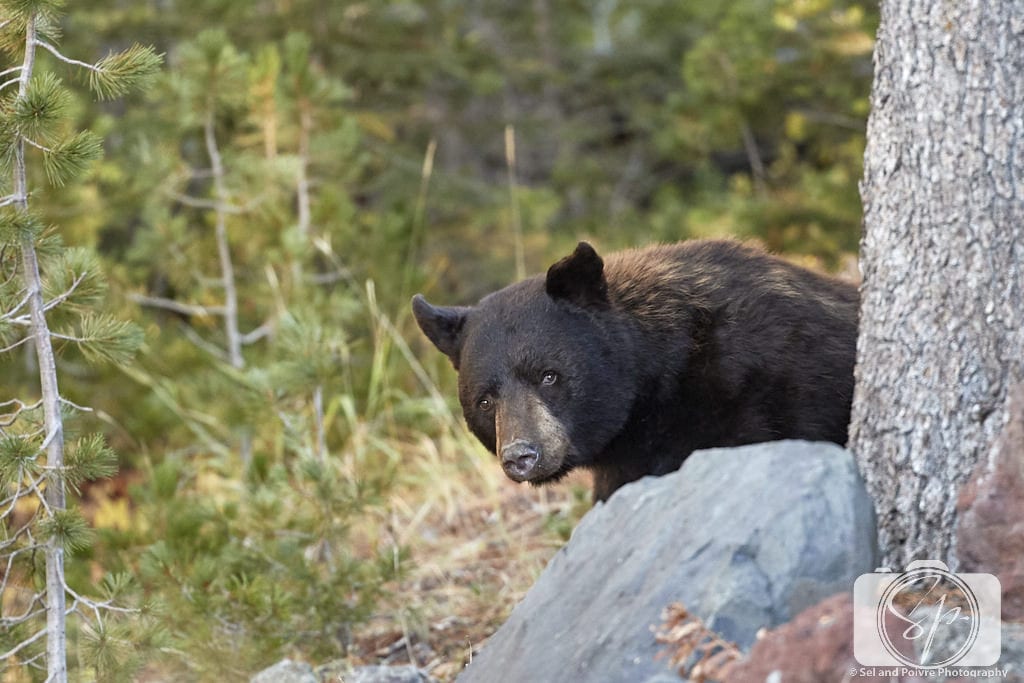 I didn’t prepare for Yellowstone National Park. I actually never really had much interest in visiting. I hate crowds and this park attracts people from all over the world. Even visiting in the off-season, there were more people here than all the other parks we visited during our 18-months on the road.

Mr. Misadventures had been to Yellowstone before. A 4-day photography trip in September right in the middle of trying to sell our house. We had initially planned to go together. But it was meant to be that I didn’t. The open house we had that weekend netted our buyer which allowed us to undertake Project Escape, so I’ve got no complaints!

We drove 150 miles within the park our first day and just barely scratched the surface. In a week you can’t see it all. Not all, not half. Maybe a third or fourth. You should just acquiesce to the fact that you can’t and enjoy what you do see. We spend 3 weeks in Yellowstone in the spring (and then 2 more in the fall) staying in an RV park and never once visited Old Faithful. On the days we visited the park, we woke up very early and got into the park before the sun rose, placing ourselves strategically in the spots with the most potential for wildlife viewing before the sun rose.

The vast majority of visitors get into the park between 9-10 in the morning. By that time we were ending our “day” finding a discreet spot to enjoy a picnic lunch before heading back to camp. The last thing we wanted to do was get caught up in a bear jam with 30+ cars peeking in on a single bear from the road. (We had seen plenty of traffic in the Bay Area and did not need that!) We would head back in the late afternoon or early evening for sunset or night photography. And every 4 days or so we would have a day off, usually due to rain where we would rest in the RV.

When it comes to national parks, Grand Teton National Park is more beautiful (I’m partial to mountains) than Yellowstone, but Yellowstone is more unique and wilder. There’s more wildlife, and they are bigger too. The bison are at least one and a half times bigger!

Whereas the buffalo were mainly on the plain of Buffalo Valley in Grand Teton, in Yellowstone they are everywhere. 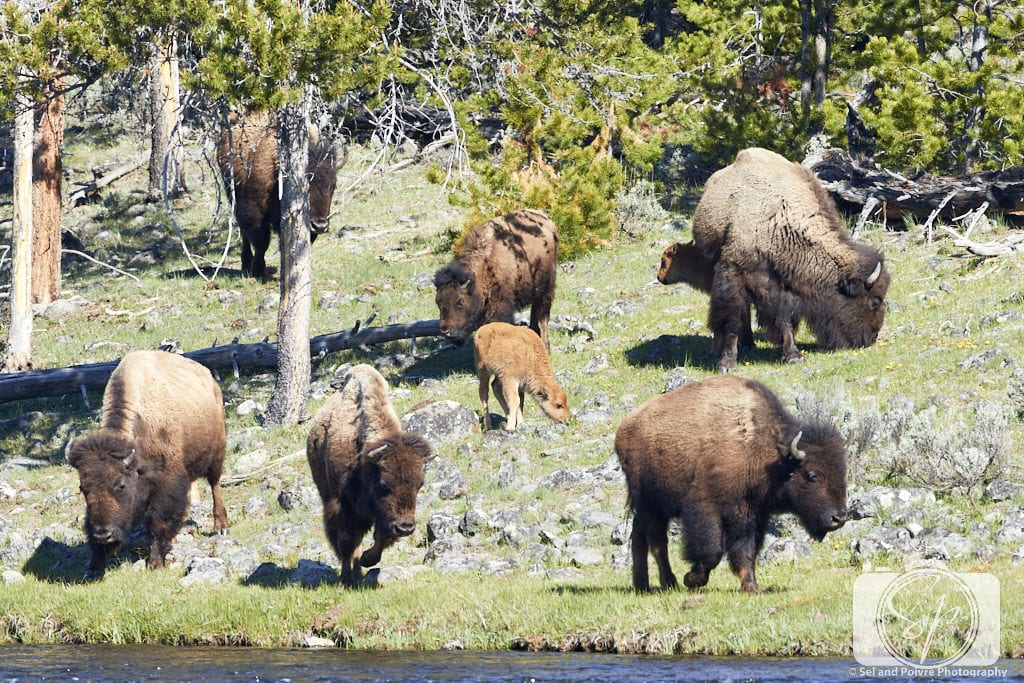 After two people told us they had seen a wolf and bears in Lamar Valley we got up on a Sunday morning at 4:30 to drive the 90-minutes it takes to get there from the west. As we approached the valley, we disturbed a black wolf eating on a bison carcass near the Specimen Trailhead. Mr. Misadventures had just enough time to get this shot before it ran off. 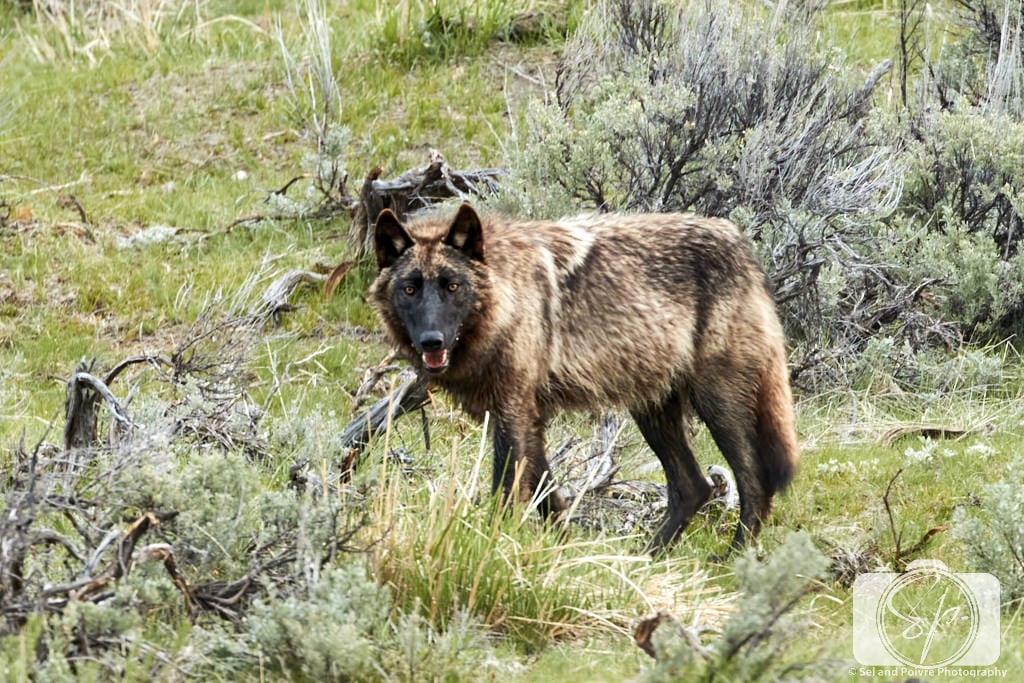 We also stopped at Slough Creek and chatted with people watching a family of wolves in their den with pups. We used their scopes which can see miles away. This is a dedicated bunch of people! Not my favorite way to view wildlife, I feel like you are watching the animals on a screen and not with the naked eye.

We searched the valley and began heading back home only to come up to a bear meandering on the hill above the turnout for the Petrified Tree. 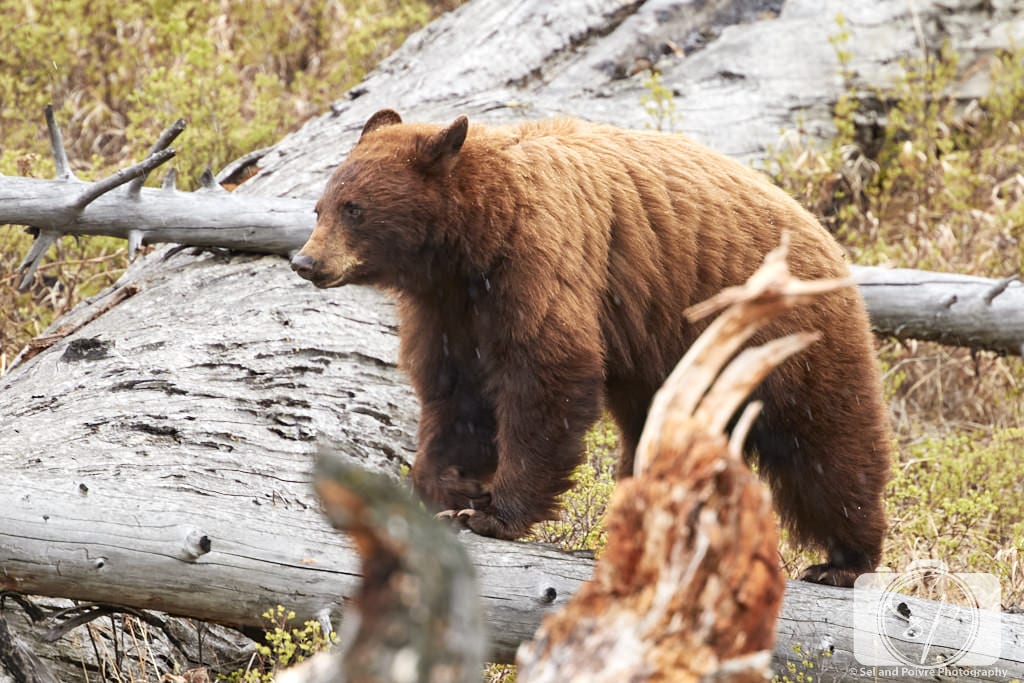 We stayed for nearly an hour, it was fantastic. I could see it with my naked eye as well as the binoculars while Mr. Misadventures was up close with his camera. 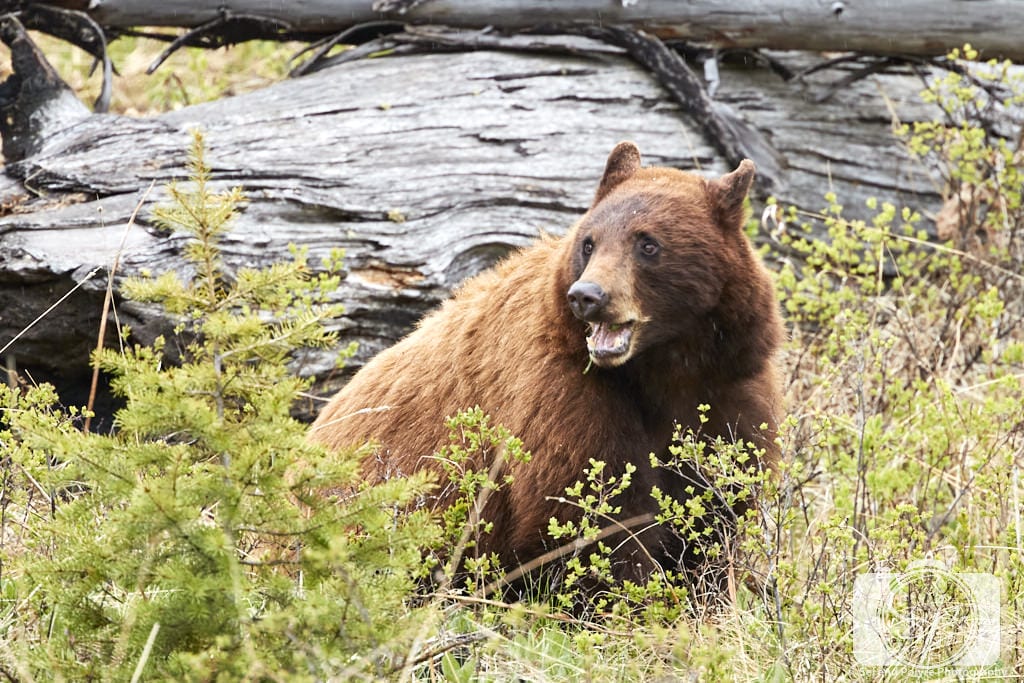 That is until this guy wandered up. 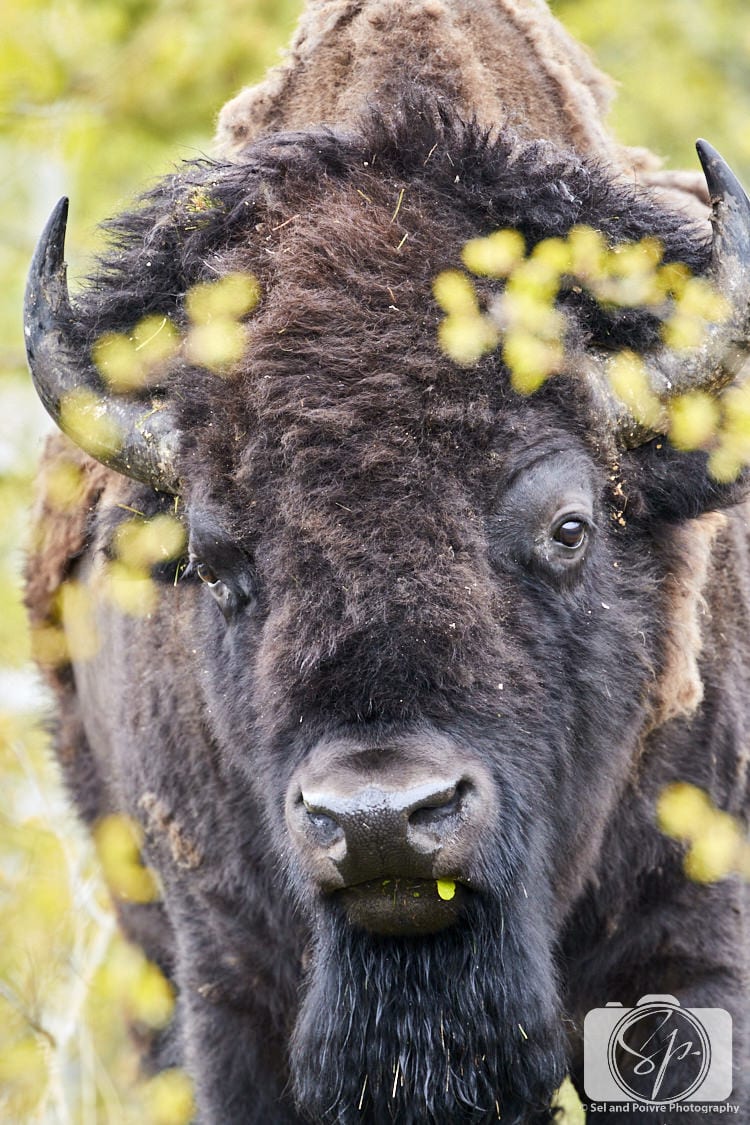 He appeared at the bottom of the hillside.

Picture this:
> bear on the hill with the high ground
> about a dozen people/photographers on a small knoll
> grumpy bison at the bottom of the hill
> disarray of parked cars

Not a good situation.

I was watching the whole thing go down on my binoculars and willing Mr. Misadventures to look behind him (as you can imagine everyone was ultra-focused on the bear). It must have worked because he turned, saw the bison took the shot above, assessed the situation, and got the hell out of there!

I have to say that during the whole 45 minutes we were watching the bear, people were on their best behavior, observing the regulations for distance and being cautious. That is definitely not the case in some of the plains where bison congregate. 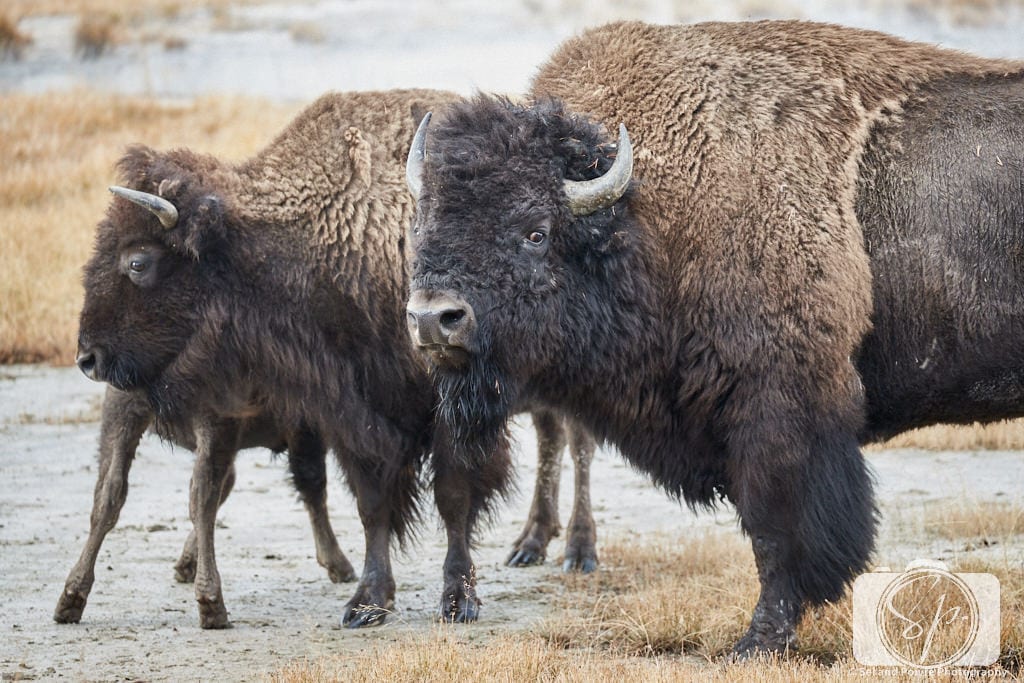 More people die from interactions with bison and elk than anything else in Yellowstone. People are just downright dangerous and it diminishes the enjoyment. It was a huge sense of anxiety for me to watch people get way too close for the sake of a photo.

You’ve likely seen news stories about bison calf. People thinking they were abandoned and picking them up, putting them in their cars, and taking them to the ranger station. Devastating. The stupidity of humans is unimaginable and in this case, cost the life of the animal. 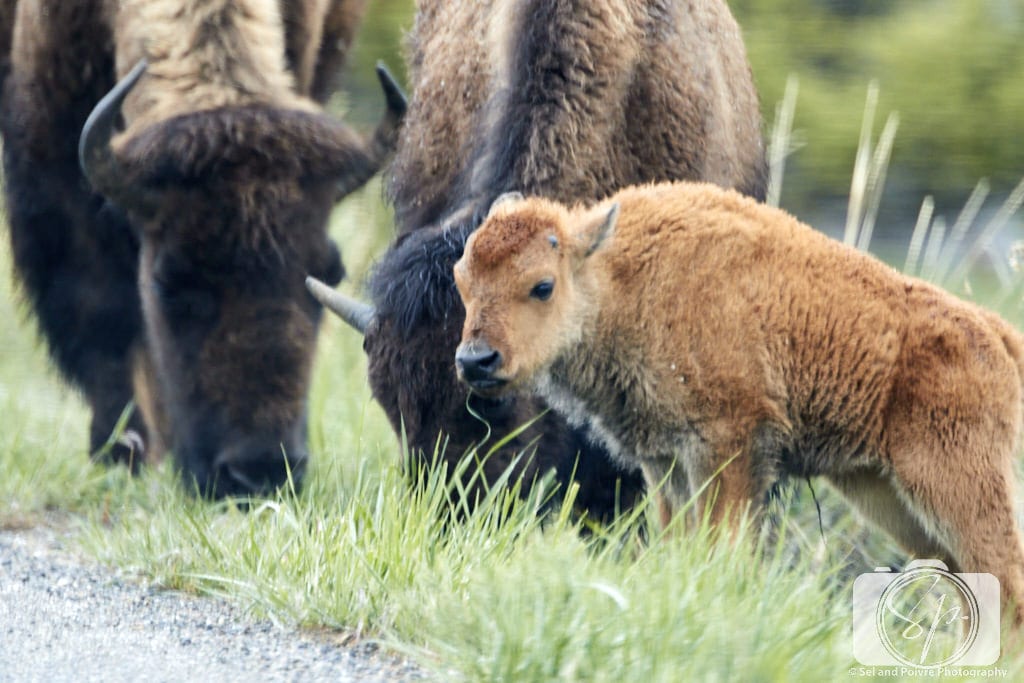 Without being stereotypical, the Chinese are the worst. They outnumber all other tourists ten-to-one and seem to be the ones that get too close. That and groups of younger people.

Okay, off my soapbox.

We left the bear/bison scene and headed back west. It was snowing/raining and the cloud cover made the light conditions not optimal for additional pictures so we decided to head home to rest.

Thank god for the Jeep’s 4×4 because on the way out from watching the bear, as we were driving down the mountain, suddenly 20 bison came crashing down from the hillside and onto the road. We slammed on our breaks, skidded, and stopped 5 feet in front of a bull. It was an awesome sight but a heart attack moment.

Remember that carcass we saw the wolf at? Well, it was too close to the road so the rangers moved it. So the next morning we got up even earlier (4 am) to head back to Lamar. Where there is a carcass, there are animals.

[WARNING: a few gory photos coming, scroll by fast if you don’t want to see them!]

We landed in the valley at about 5:45 (we saw a black bear on the way but since it was pre-sunrise we couldn’t get a photo) where 50 photographers were already set-up. So much for the early bird getting the worm. The scene was madness. So I dropped the hubby off, found a spot to park, and watched via binoculars, getting out every once and while to take a look.

But for Mr. Misadventures it was worth the craziness as he got this: 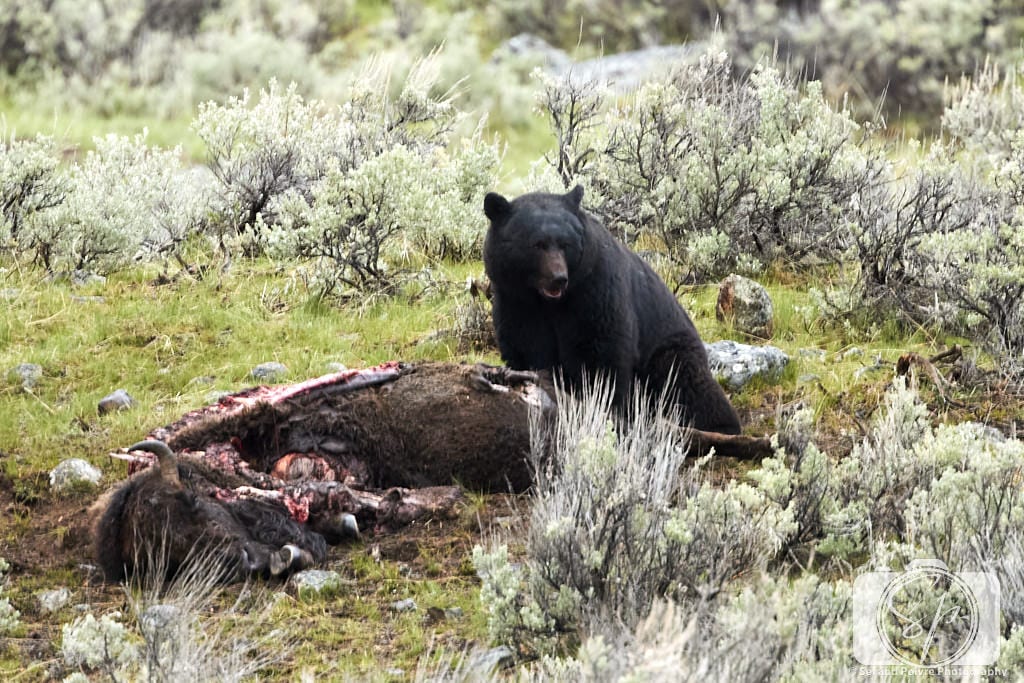 A bear gorging on the bison. Then he crossed the street (right in front of the photographers). 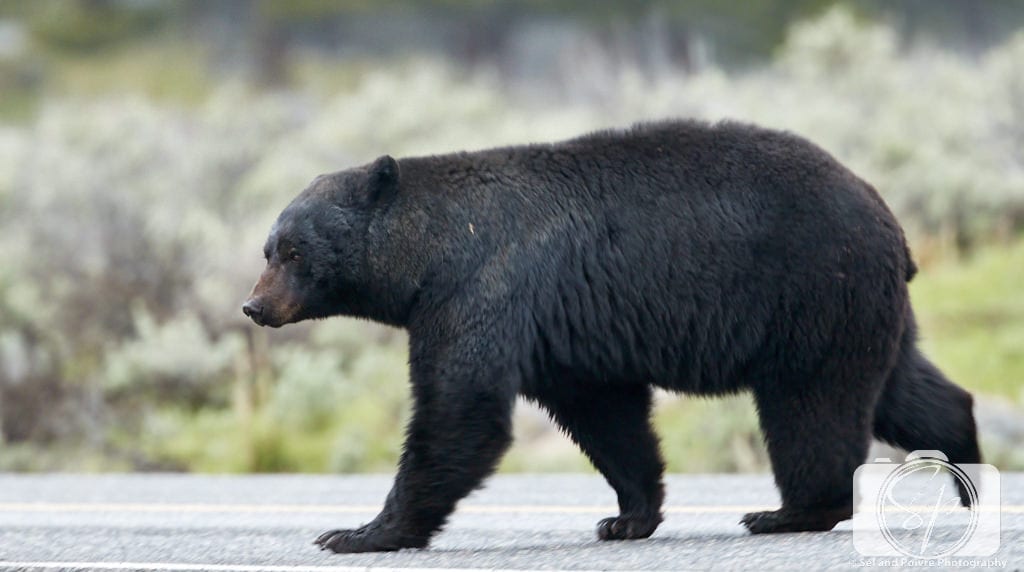 And got himself a drink. 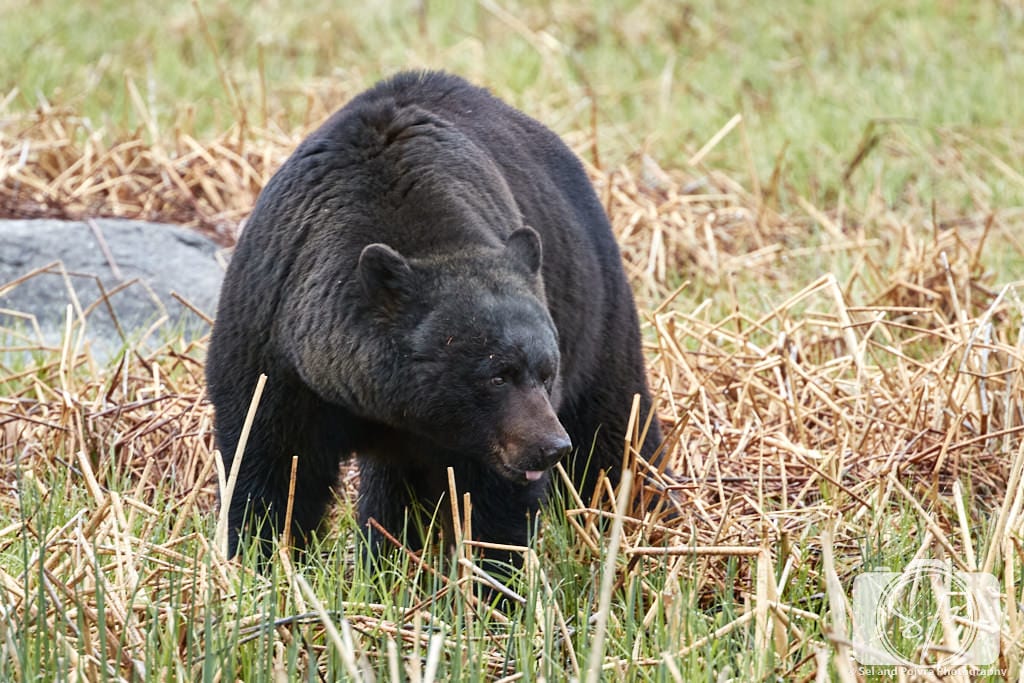 Which gave the coyote time for a snack and to chase away the black wolf. 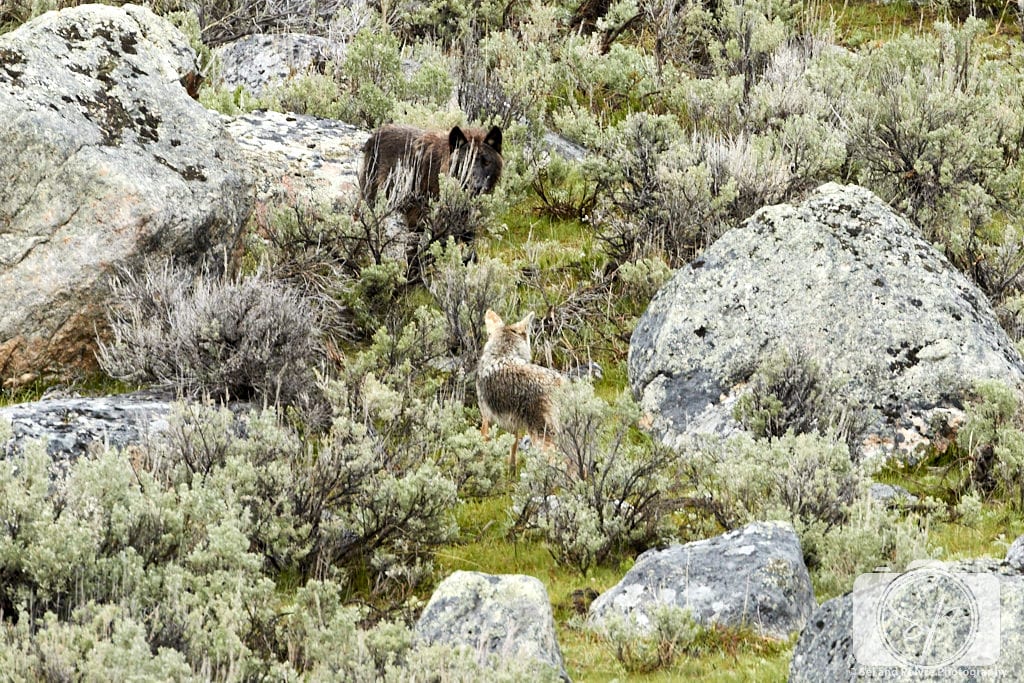 Before the bear returned for its second course! 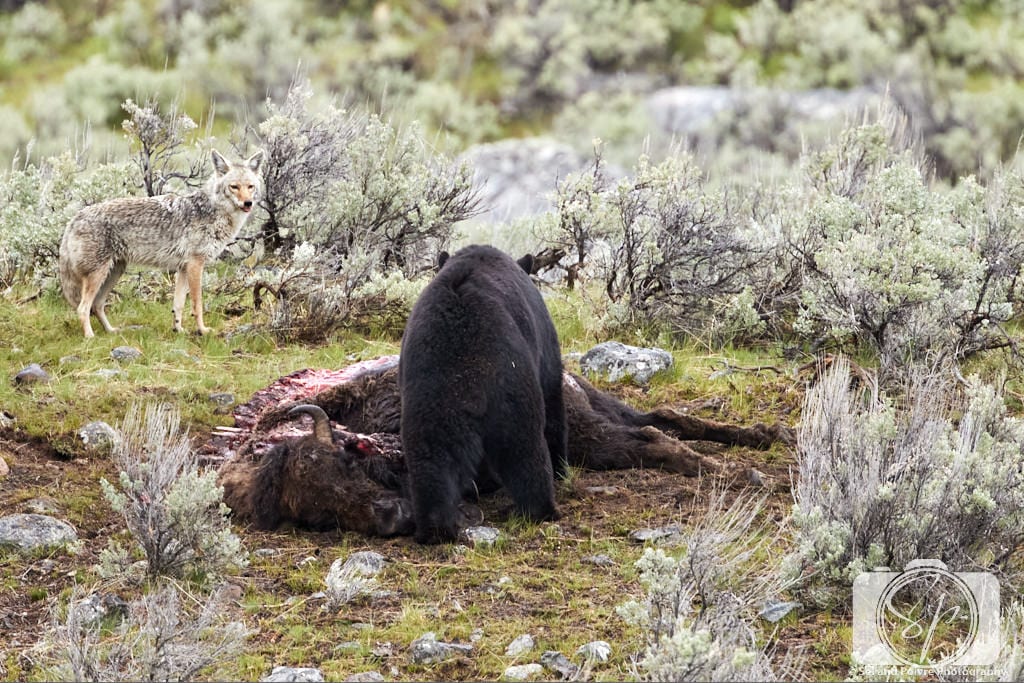 On the way back we got to see some bighorn sheep near the bridge by Yellowstone River, a picture we’ve been chasing since the start of our trip in Borrego Springs (although we saw some in New Mexico and Borrego Springs, but not this close.) 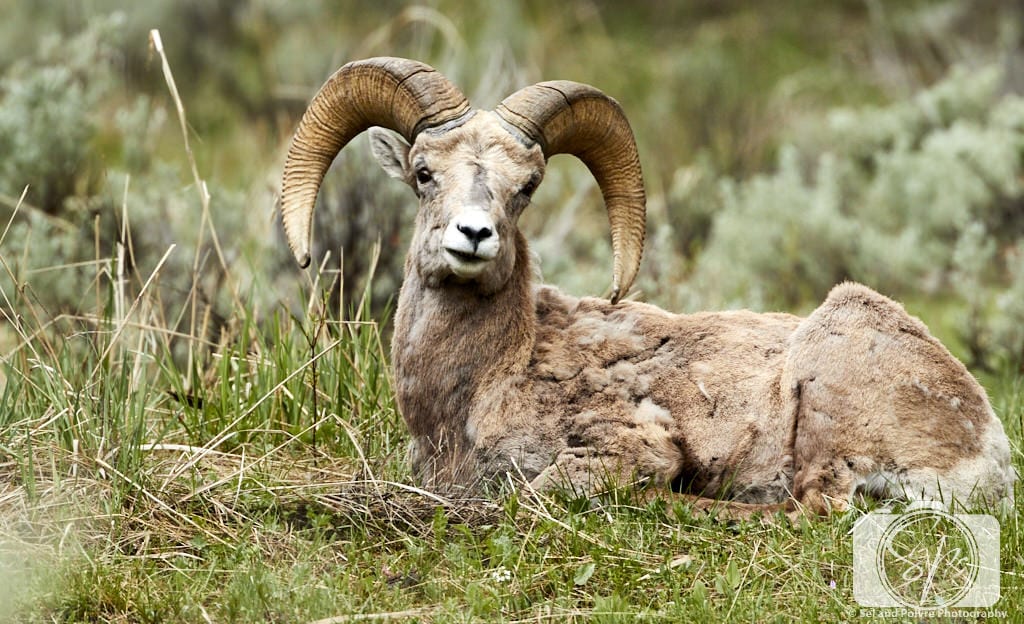 And once again the party was crashed by this guy: 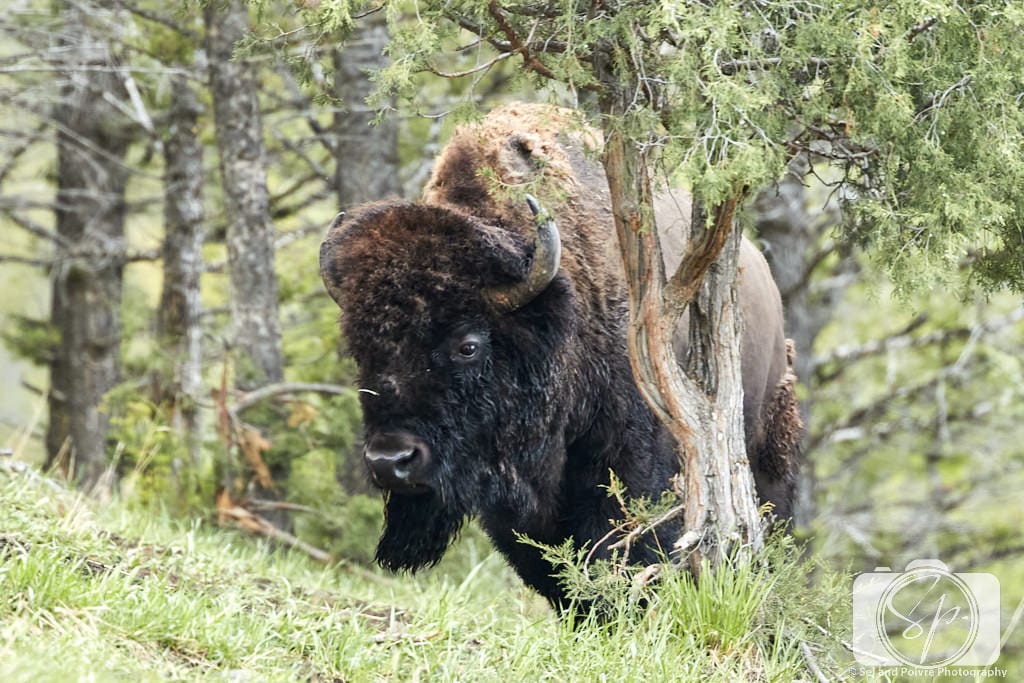 The bison are the ultimate photo bombers, they just randomly appear at the worst moments and despite their temperament, they are beautiful. Plus the calves are so cute! 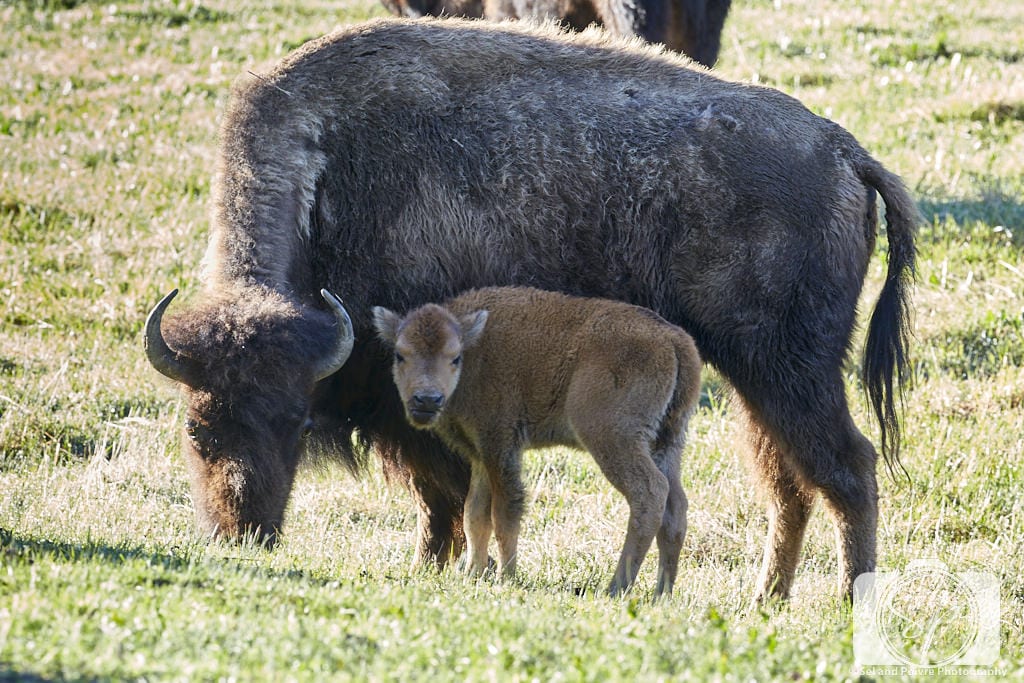 Tuesday morning we woke up at 6:15 (luxury) and headed to Lamar. It was day three of the carcass, the black bear was still eating! No coyote or wolf in sight. The bear would eat a little then walk across the road to drink.

It was kind of funny because the bear didn’t seem to be too happy with what was left of the carcass but that didn’t stop him from eating! We watched for a while, headed further into the valley, and turned around to head back west.

We spotted the bear from the previous day (with the whole hill and bison situation) in a grassy knoll eating. We sat on the roadside and watched him meander through the meadow for nearly an hour. 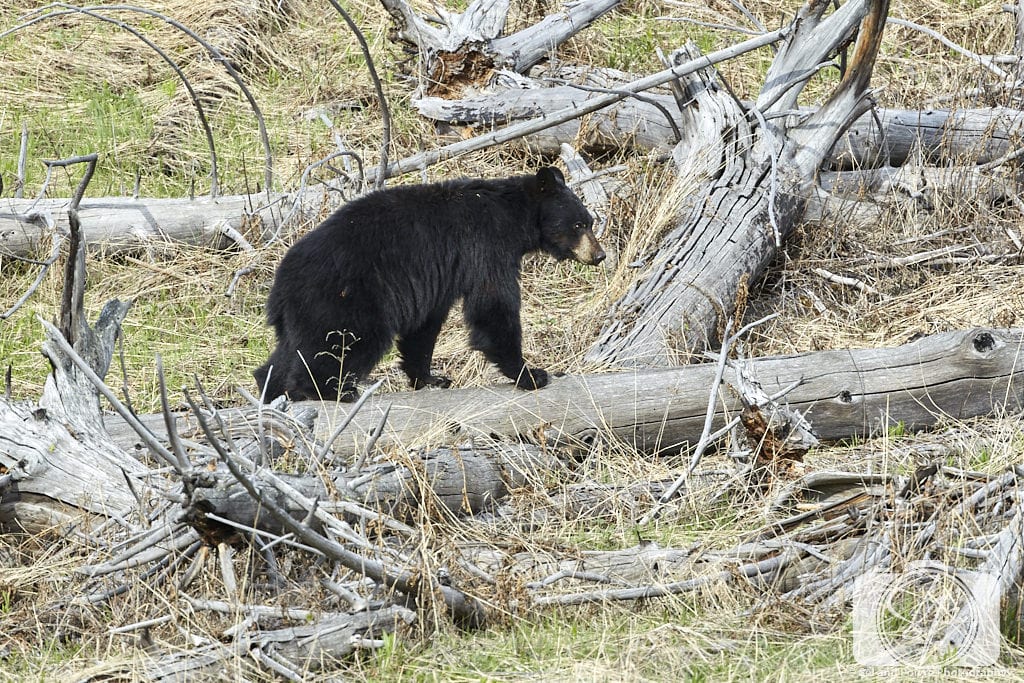 It was noon and I wanted to pull my ramen out and watch the show. It was the first time wildlife watching that I had (a) a seat and (b) warm weather as it was nearly 60 degrees!

When the bear headed to the woods we headed back to the Petrified Tree turnoff where we’d seen him the other day in hopes he’d move in that direction. We sat on a log eating lunch while watching two bison graze. Little did we know that a quarter mile down the road was a black bear and a cub.

We turned that direction to make a U-turn and ran right into two rangers who were managing crowd control. We were able to see the bear and her cub from the road and Mr. Misadventures got them on film. 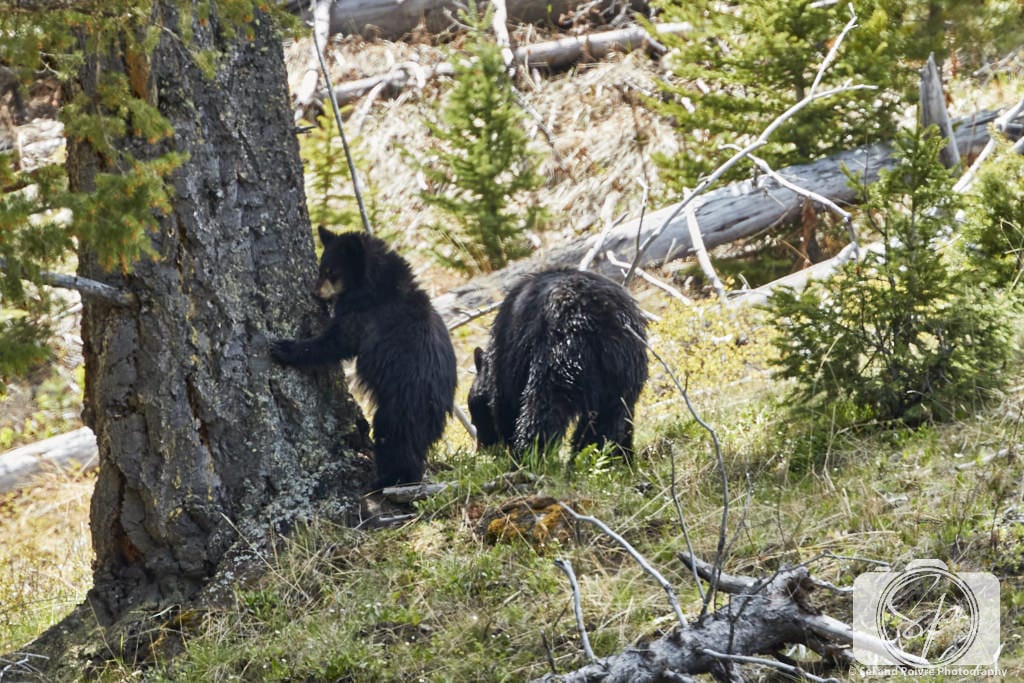 I could keep going and going, but then this post would probably be 3,000 words! So I’ll save the rest of our week for part 2!

Where did we see the most bears most often? Lamar Valley and Hayden Valley – most before 10. That’s not to say we didn’t see them in other spots, or at different times, but this is when we had the most luck. We saw bears nearly every single day!

How about you? Have you been to Yellowstone? What were your experiences with the wildlife? If you haven’t been, do you want to go? What do you want to see most? Do tell!

For a visual summary of this post, check out my Yellowstone web story!

Seeing wildlife in Yellowstone is definitely a family bucket list trip! I think you're so smart to camp nearby, get up reallllly early to beat the crowds, and take your time in the park. I'm amazed at how many bears, wolves, sheep, bison and more you saw!

Yellowstone is high on my list so appreciate this guide on beat watching! Greatly appreciate the tips about getting up early and where you had the most luck for bear sightings.

Great pictures. Love to go back to Yellowstone.

Wonderful photos! I'm heading to Yellowstone in June, hope I'm as lucky seeing so much wildlife.