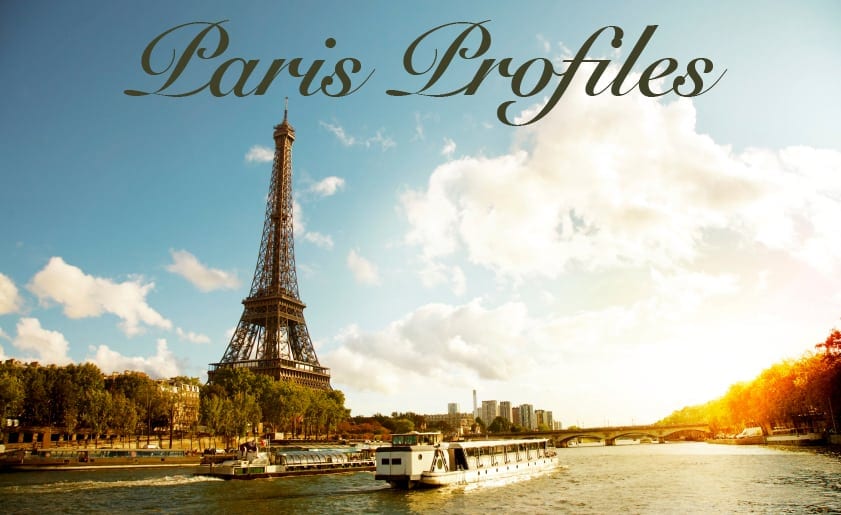 I’ve been waiting a very long time to find someone who lives in Paris’s 4th arrondissement, and as they say in French “ça y est !” or there you have it (or finally!) because when I found Charli James’s blog Am I French Yet? I could not have been more thrilled to learn that is where this France24 journalist calls home. There are 2 parts to the 4eme – Île Saint-Louis and the Marais – both neighborhoods I like to spend time in. Île Saint-Louis one of the 2 islands in the Seine connecting rive gauche and rive droite, because it seems to be a neighborhood that despite the presence of Bertillon ice cream isn’t too affected by tourists and the goings-on of the rest of Paris. And the Marais – well, I love the food and the small boutiques that give this part of the city a cool vibe.

I just spent 2 weeks in the other part of the Marais, the 3rd, where my friend Kasia lives, and am really keen on learning more about the 4th. Enter Charli. Being married to a Frenchman, having lived in France for a few years and being a die-hard Francophile, I like to keep up on the French news and what is going on in the Francophone world. (In my opinion) the 2 best ways to do that are with TV5 and France24. Mr. Misadventures and I watch these 2 channels on a daily basis, TV5 for movies and documentaries and some news, but the vast majority of our news we get from France24 which is an amazing news channel in French, English and many other languages – I love the reporting and love the reporters.

Charli has a funny, insightful and resourceful blog on Paris, but she is still a journalist who appears on TV so I didn’t think I had a chance in hell of getting her to share her neighborhood favorites, but she could not have been more open and accepting to the idea and provided her responses right away, génial !

There’s a lot to love about the 4th, but my favorite thing is the waterfront along the Seine river. The official name of the area is the Parc Rives de Seine, but everyone just calls it Les Quais. It used to be for cars, but the road is now closed to traffic and has become a place where Parisians go year-round to picnic, walk their dogs, run, play with their children and live the good life! It has changed the neighborhood to have this wonderful outdoor space.

I love to take a bottle of wine down there with friends and enjoy the beautiful views and people watch. A number of restaurants have opened on boats along the water where you can sit riverside— my favorite is Les Maquereaux.

Tourists are both a blessing and a curse. They definitely add to the liveliness of the neighborhood, but it can get annoying to hear tours outside your window on weekend mornings or dodge groups of Segways in the street.

[3] What differentiates your neighborhood from all the other parts of the city?

Le Marais has more pre-revolutionary buildings and streets intact than any other part of Paris. My own apartment building is older than America, my country of birth. So it is as close as you can get to Old World Paris.

The 4th also includes the islands of Île Saint-Louis and Île de la Cité where Notre-Dame Cathedral is located and that connect the Right Bank and Left Bank.

Finally, on Sundays more shops and restaurants are open than in most parts of Paris because of a special zoning allowance and the heart of Le Marais is closed to traffic so visitors can walk in the streets. This makes it is a great place to visit on the weekend.

Le 1905. Earlier this year my favorite restaurant, Vins Des Pyrénées, opened this excellent cocktail bar upstairs in what used to be an apartment. It feels like having a drink at a chic friend’s place, and has a terrace and an indoor smoking room that add to the local French feel of the place.

Place des Vosges is probably the most popular site in the neighborhood, but also adored by Parisians and a place lots of locals go to have picnics. If you want to sit along the plaza, have a spritz or croque madame at Cafe Hugo.

I’m not a huge breakfast person, but I’m obsessed with the chocolate chip cramique at Aux Merveilleux de Fred. It is a kind of brioche bread and truly a gift from the French gods.

When friends are in town I will take them to Le Loir dans La Théière. The lemon meringue pie is a sight to behold. It is also one of the few places in the neighborhood that serves weekend brunch — be sure to go early because it fills up fast.

The 4th includes the Jewish district of Paris, where there are some excellent restaurants. Miznon is a current hot spot with inventive, modern Israeli food — think boeuf bourguignon pitas. It’s casual and not very expensive. The pastrami sandwich and pastries at the Florence Kahn Bakery next door are also worth stopping by for.

Vins Des Pyrénées. I almost didn’t want to put this bistro on the list because I love it so much I feel territorial over it, but it is too great not to share. It is located just off the touristy area, so it still feels very local. The food and wine come from the Pyrénées mountain region of France, but they also serve excellent signature French dishes. Order the steak tartare “aller–retour” (translates to roundtrip and means slightly seared on the outside), a bottle of red and the pain perdu for dessert and die happy.

If you’re looking for something very classic, Brasserie Bofinger is my favorite of the old-school brasseries in Paris. The steak au poivre is to die for and it is an Alsatian restaurant, so also famous for the choucroute. Always try to sit in the cupola room, it is the best one by far.

Can I give more than one? Passage Saint-Paul is a tiny, charming and unique alleyway that connects the street to a hidden side entrance of the Saint-Paul church. Walk through Le Village Saint-Paul, a maze of cobblestone streets and courtyards with tiny antique shops that will transport you back in time.

For shopping, Rue Saint-Antoine has some of the best artisan shops in Paris. I always take guests to Fromagerie Laurent Dubois, which is one of, if not the number one cheese shop in the city. They will shrink wrap the cheese for travel if you ask. If friends are wine lovers, we’ll go to Les Caprice de l’instant for bottles to take home. The staff gives great advice and the shop has some real gems.

Here are other great spots in the 4th arrondissement that I have curated for you:

4eme Parks, Museums & Things to Do

How about you? Do you have any 4th arrondissement additions? Have you been to this area of Paris? Did you find this post helpful for a future trip?