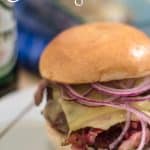 I’ve had the opportunity to write about a sampling of some of San Francisco’s best burgers for Groupon.

I have interviewed the founder of the latest geo-located burger app called Burgerator, an app that will help you find really great burgers in San Francisco.

I have written about one of my favorites, Gott’s (formerly Taylor’s Refresher in Napa and in San Francisco at the Ferry Building) as well as my pick for the best vegetarian version burger at Source.

But what does the rest of San Francisco say?

Today is National Cheeseburger Day so I thought I would do this little post for anyone looking for a great cheeseburger in San Francisco. I have included a round-up below from some really great San Francisco sources, but I also wanted to give you the highlights.

These are the Top 3 Best [cheese] Burgers in San Francisco based on my research. These three consistently appear on lots of “best of” lists and are frequently written about by bloggers.

I am putting them in alpha/numerical order, all three scored the same in my research.

4505 is known for its BBQ, briskets, etc. But as the name suggests, they make a damn good cheeseburger. They have a store at 705 Divisadero Street and also a stand at the Ferry Building on Tuesdays and Thursdays (that’s where I have eaten their burger). They use gruyere cheese which is the perfect cheese to offset the delicious smokiness of the meat.

The Marlowe burger – caramelized onions, cheddar cheese, bacon, and horseradish aioli, what more do you need? Me, I take the crispy brussel sprout chips (honestly that is the real reason I go) and one of their great beers on tap. They are currently located at 330 Townsend Street but are moving to 500 Brannan Street (not too far away) in October.

The [cheese] burger at Nopa is wood-fire grilled with sharp cheddar cheese and pickled onions. The secret? The salt! For each pound of meat, Nopa adds a teaspoon of salt, which brings out the flavor of the grass-fed beef. Nopa is located at 560 Divisadero Street at Hayes but it’s hard to get into!

There are a ton of great burgers and cheeseburgers in San Francisco, but these three are always on everyone’s list. I have eaten at 4505 and Marlowe and you can guess that I will be heading to Nopa real soon!

How about you? Do you have a favorite burger spot? Do tell!

these chesseburgers look delicious and tasty

Extensive list. Bookmarked for when I'm in San Fran! Paul

@Paul, come back and let me know if you tried (and loved) any of them!

You gotta love a good burger!

Hey Andi! I had many favs! I lived in the heart of the city next door to sacred heart school! So some of my favorites where 1300, Gosh this Thai one that has two locations one in Hayes valley the other in tenderloin. The Ethiopian restaurant in mission and 24, papalote (the salsa), Woodhouse fish, Phat Philly, and so many more LOL!

I love San Francisco and Burgers! What a great post!

@Meegan, do you have a favorite in SF?