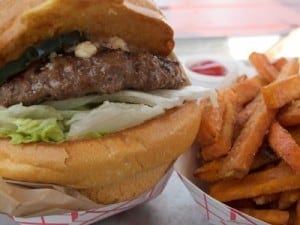 I come from a burger family. Or rather, a burger Dad. Apparently most days after high school you could have found my Dad parked at one of two places. Nation’s Burgers or Casper’s Hot Dogs (that one is an anomaly). As a kid, I ate a lot of burgers, generally McDonald’s.

Once I went away to school I left burgers for more sophisticated fare like Thai and Japanese, things that I had not experienced before. Coming to the San Francisco Bay Area made my food landscape much broader and I rarely partook of burgers. I would eat one from time to time, mostly when I was out of money, which was quite often as a student. I would drive an hour plus to visit my uncle’s burger restaurant for a family discount, also known as free!

I would definitely take sushi or dim sum over a burger most days. While living in France I did not eat a single hamburger. I could have gone to the McDonald’s in the village next door at any point in time, but with so much wonderful, fresh and unprocessed food surrounding me, a hamburger was not high on my list! The closest thing to hamburger I ate was beef tartare, which I absolutely adore.

But now and again (literally just two-to-three times a year), I do like a good burger and this past weekend I found one.

We were up in Napa Valley and had plans to eat at one of the fancy-schmancy restaurants, but when we saw the crowds we changed our minds. We skipped our already late lunch reservation (1:45) and decided to take a drive to find an alternative. We were in Yountville and reached Calistoga (map here) without really finding anything. But hunger pains took over and we decided to head to Dean & Deluca to buy ingredients to build a picnic lunch. We headed back to St. Helena to go the store when we ran into an interesting site. 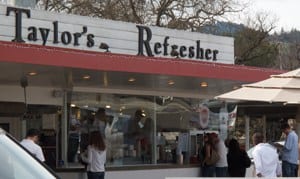 Taylor’s Refresher. An old-fashioned hamburger joint with a long line of people waiting to order. We decided right then and there that any burger worth waiting in line for must be a good burger. We pulled in and walked up to the line.

Admittedly, I was amazed that my French husband, who refuses to stand in line for ANYTHING, was willing to do so for a hamburger, but I kept my mouth shut! We grabbed a menu and looked at our choices.

There were many classics to choose from and we selected Cheeseburgers, with blue cheese bien sûr! I chose sweet potato fries and my husband got regular fries. The really cool thing about ordering a hamburger as an adult, and in Napa Valley as well, is that you can have it with an adult beverage!

There was a full wine list plus several beers. We chose a Napa Red Ale that was yummy. The burgers were unbelievably good, huge, but good. I did not like the sweet potato fries. They were supposed to be sprinkled with chili powder, but to me, it tasted like curry powder which I didn’t think matched well with the sweet potato.

It is not only a fantastic meal but a feel-good meal as well. The food at Taylor’s is all organic. All their menus, plates, utensils and sauce containers are all recyclable or biodegradable.

Turns out there is another Taylor’s right not too far from my office, but there is absolutely no way I could ever have one of their burgers and go back to work. I spent the rest of the day sitting like a lump as I digested all that good food. I would be in a food coma that would not be conducive to business meetings!

It really was a great experience. There is always something to be said for throwing your plans away and winging it when you are exploring new places.

Have you ever discovered a great place by accident?

there is a very popular burger joint 100 miles from okc and essentially, in the middle of nowhere. the only thing in meers, oklahoma is the meers store, which is a burger joint. i'm pretty kosher, but i've seen the blt and it's enough to make me reconsider...and, the burgers are served in pie tins. they're huge.

i love to read about your adventures. i think i'm a classic armchair traveler. sometimes, just hearing about the adventure is enough. i so would have stopped at this place. my dad loved places like this.

I love burgers. Love love love them. When you are in NY, if your burger mood strikes, we should go to 5 Napkin Burger.

I just saw something on the Food Network about the Shake Shack, with lines equally as long, but as a fellow foodie, I will trust your picks!