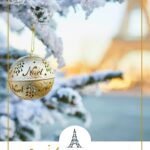 While everyone can agree that Paris is magical all year round, there is something special about visiting the French capital in December. The streets brighten up just a little bit more, and there is a poetic beauty around every corner. While chilly winds and sloshy rains might put a damper on some activities, December transforms Paris into a living, breathing fairyland.

I have been to Paris during Christmas time so many times! Having worked for lots of tech companies that typically have a holiday shutdown, I have had plenty of opportunities to be in the city of light during the Christmas season. The city of light takes on a whole new meaning with Christmas lights (and other holiday lights), Christmas trees, Christmas decorations, and one of my favorites, the shop window displays from the Galeries Lafayette and other department stores on the Boulevard Haussmann to the small boutiques in the Marais.

Marchés de Noël, holiday window displays, and beautifully adorned streets are some of the biggest treats of visiting Paris at this time of year. The traditional and modern Paris Christmas markets pop up all over the city and encourage visitors to stroll through never-ending food stalls amidst flavourful bites of Tartiflette and Aligot and sips of mulled wine (vin chaud).

Although it might seem like Christmas festivities usurp the city for the entire month, December does bring some other magical experiences. The Parisian Opera season peaks in winter, which means you now have a reason to get all dressed up and enjoy a classy night out. The icy weather also brings out some of the most magnificent ice skating rinks in some iconic venues. From rooftops and indoor rinks to skating on the Eiffel Tower, the options are endless. All you need is your warmest scarf and the cheerful spirit of holidays (and maybe some patience for the long queues!).

Whether you’re interested in traditional Christmas festivities or want to have a magical night out, here are some of the unmissable experiences of Paris in December.

What can you do in Paris in December?

Paris is a city that never sleeps and the Christmas season makes Paris even more enchanting. Parisians love to celebrate the holidays. Festivities are everywhere from expensive department stores to outdoor markets, from casual cafes to grandiose monuments. The general atmosphere of Paris in December is one of giving and joy, it is one of the best things about visiting this time of year. There are many things that you can do during your visit to Paris in December, such as partake in the festive events, eat seasonal food while admiring the Christmas decorations while strolling through Parisian streets.

During the winter season (late November through January), temporary ice rinks are set up all over the city. Ice skate at the Christmas Market in Tuileries and some of the iconic venues such as Grand Palais, the rooftop of Galeries Lafayette, on the first level of the Eiffel Tower and Trocadéro. What could be more romantic or more fun than ice skating at the Eiffel Tower? (P.S. they all have skate rentals available, no need to pack!)

Here are some spots:

Why Paris in December?

Visiting Paris in December allows you to experience the city during one of the most enchanting times of the year. Parisians look forward to the Christmas season, and Paris in December is a perfect time to be in Paris! You can attend festivals and enjoy the seasonal activities that Paris has organized for you.

The benefit of Parisian restaurants will also provide you with amazing food during this time of year. Paris in December combines everything that Paris does best: Parisians, food, Paris, and holidays!

Culinary Delights of December in Paris

Various markets also invite Parisians to their seasonal celebrations with food stands that serve traditional dishes such as pintade, chestnut stuffing, or ham (this is France after all!). Parisian bakeries will also provide Parisians with unique holiday flavors including pain d’épices (spice bread) and traditional pâtes de fruits (fruit pastes).

Parisian gourmet stores will also provide Parisians with specialties like foie gras. Parisians will also enjoy going to the Christmas markets and eating a variety of tasty street food, such as crepes with various sweet or savory toppings. Paris in December is a wonderfully enchanting time to visit Paris! Parisian chefs have delicious dishes that everyone can enjoy while strolling through Parisian streets during winter!

What to eat in Paris in December

Parisian food is rich and decadent, but these dishes can be enjoyed any time of year. In December, you have a chance to indulge in some of the best spreads as the winter begins to set in. In Paris, winter typically arrives right before Christmas with its festive lights and wintry weather. In the month of December, many Parisians settle down to feast on their traditional holiday meals.

The French are well known for their gastronomic wizardry and local cuisine – a simple yet hearty fare that is rooted in delicious meats and cheeses.

There are a few key foods that you should keep an eye out for during this time of year:

Beef dishes like Beef Toulouse, a variation of what is known in America as beef stew, or pot au feu. Although the main ingredients are the same, this meal is made with red wine, garlic, and mushrooms. Or the classic, Boeuf Bourgignon, another beef dish with slow-roasted meat in a rich sauce made up of onions, carrots, bacon cubes, garlic cloves, and herbs.

Or try duck. Like duck confit which is made by first curing the duck with salt, pepper, and spices. The legs are then cooked for hours in their own fat until they’re nearly falling off of the bone. Or canard à la pressed duck (pressed) is an even more extravagant dish consisting of a whole roasted duck that has been pressed and roasted on top of a bed of bacon and vegetables. It is then served in its own juice.

If beef and duck aren’t your thing, consider guinea fowl. France is the largest producer and consumer of this poultry dish in Europe!

You can find all these delicacies at French restaurants, traiteurs, and markets during December. This time of year also brings the excitement of holiday markets where you can buy goods from local artisans and treats from local bakers. Parisian holiday markets are a time-honored tradition that dates back centuries.

Don’t forget to try some French treats for Christmas, especially if you’re a fan of sweets and pastries! You can find many cakes, chocolates, and other desserts that are associated with this holiday in France. Don’t miss the possibility of trying a Bûche de Noël (Yule log cake) that comes in so many shapes and sizes these days! If you are in Paris at the end of December (through early January) you will see the Galette des Rois in preparation for Epiphany.

What you will find in season and in restaurants in December:

The winter months in Paris are cold and dark, but this time of year brings even more excitement to the city that never sleeps. If you can put down your fork long enough to go outside, you’ll find yourself walking through the streets of Paris wrapped up against the chilly wind inside a warm cocoon created by the city’s festive decorations and holiday cheer.

Do not forget the drinks! It is a great time of the year for chocolat chaud (hot chocolate) and vin chaud (mulled wine or hot wine). One of the best places to get vin chaud is at a Christmas market (Marché de Noël).

December is a great time to visit Paris for those who enjoy the winter season. A trip here during this month will give you an authentic taste of French culture and cuisine.

Paris restaurants can be expensive, and while it’s worth splurging on one good meal, you don’t want to blow your entire travel budget just on food. Luckily, you can find a lot of treats at the local markets (here’s the etiquette). You can also ask the hotel staff or locals to recommend small cafes and bistros that they go to. This may save you from “tourist rates” and will definitely have good food.

The Weather in Paris in December

Be prepared for cold weather! December weather in Paris is winter weather! Daytime highs this month are mostly in the mid-40s °F. You will get a few warmer afternoons, but in early December, the max you are going to reach is about about 55 degrees Fahrenheit. At night and in the morning, temperatures tend to hover around 30 °F. However, on occasion, they can dip below 20 degrees Fahrenheit! It is rainy or icy, but rarely snows.

I’m sure that packing for a trip to Paris in December seems daunting, but it’s actually not that difficult. It’s important to remember when you are packing for Paris in the winter, it’s going to be cold, so make sure you pack warm clothes and bring layers like sweaters and scarves!

Make sure to plan ahead when you are packing for your stay in Paris with little difficulty.

Here are some tips on how to pack light:

Following these simple guidelines, you will be able to pack for a trip to Paris in December with little difficulty!

Read more suggestions in my What to Wear in Paris: Tips for Packing for Paris in the Winter (+ Packing List!) post.

Is December the best time to visit Paris?

Paris is popular all year round, it is one of the reasons why I have written this series. I try to detail the best (and worst) parts of Paris every month throughout the year.

Paris in December is enchanting. During this festive season, Parisians take advantage of the city’s holiday markets, enjoy the beautifully decorated parks with twinkled lights and Christmas trees, and people young and old make their way through the streets wearing colorful scarves, buttoned-up coats, and winter hats.

That French joie de vivre shines bright during the holiday season and you should definitely consider planning a trip during this month!

Have you ever visited Paris in December? What was your experience? Did you go to any events? Do share!

I would love to explore Paris one day, too! A dream destination for so many!

Paris sounds so lovely and festive during the winter. I have never been there before and it is fun to consider the different times of year.

I bet Paris looks magical in December. I certainly would love to go there this time of year.

I think Paris beautiful any season, but in December it must be special.

Paris is on my wish list and hope to visit this place in December someday 🙂. Thanks for sharing all the details 😍.