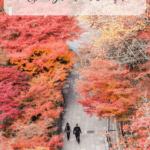 Sorry for the quality of the photo, but it was at night and I was getting jostled everywhere! This was us trying to make our way back down after we tried to go up! But you know, I always look for the silver lining. So when we took to a side road to escape the crowd and found some incredible food stands, I’d say we were vastly rewarded for our efforts!

Steamed dumplings with beef and chestnut…

As we were getting up at the crack of dawn anyway (sometimes jetlag works in your favor!) we headed back out to Kiyomizu-dera Temple to try our luck again. Luckily, we found it practically empty!

Mr. Misadventures had all the time in the world to take photos in all the interesting angles he likes to take!

Kiyomizu-dera Temple is a Buddhist temple established in 778 on the side of the Otowa Mountain, specifically the Otowa Waterfall in the eastern part of Kyoto, and gets its name from the fall’s pure waters. Kiyomizu-dera literally means “Pure Water Temple.” (More information about the temple can be found on their website.)  The temple is part of a huge park with other buildings and it took us several hours to make our way through, granted Mr. Misadventures took at least a thousand photos which forced me to do a lot of people watching! It is also an amazing place to see autumn leaves in Kyoto.

There several building, shrines, temples, halls. All beautiful. I am not sure if I would have enjoyed it as much at night. In the evening the maple trees are lit up, which is nice but in the daylight, you get to see all the intricacies of the buildings.

The entrance affords a beautiful view of the city.

I found aspects of the little hall/shrine you enter to get into the park to have a lot of Indian aspects (or are they Japanese aspects in India, I don’t know which came first!).

When you get to the Main Hall (Hondo) it gets a little more crowded and a little more complicated to take photos. There is construction going on and it seems like nearly every shot you want to take has a big blue tarp in it somewhere (not to Japan, maybe you want to do construction during non-season weeks…are you taking lessons from CalTrans?). The photo below doesn’t have a blue tarp but in the bottom right hand corner you can see construction platforms in bamboo.

Once you walk through the Main Hall and meander the lovely paths down to the base of the hill you will find the Otowa Waterfall. Visitors use cups attached to long poles to drink from them. There are three streams and each one’s water are said to have a different benefit: longevity, success at school and a fortunate love life. Drinking from all three is considered greedy, so choose wisely!

We saw lots of students so I am guessing they were after success in school!

I ran into this guy with the most adorable dog!

This carrier was the first I had seen, and I had wondered why there weren’t that many dogs, after this encounter I did see a few other folks carry their dogs around like this (maybe I hadn’t noticed because I thought they were babies?) and I found signs later in other temples saying it was mandatory to have your dog in one of these carriers if you wanted to bring them into the parks and temples!

We really had an enjoyable morning at Kiyomizu-dera Temple, it is spacious, beautiful and easy to navigate. Unless you enjoy dealing with large crowds, I don’t recommend going at night when the light festivals are occurring, but beyond that, I think it should definitely be on any list of spots to visit while traveling to Kyoto. Also, the neighborhood surrounding the temple has some really terrific spots to visit like the Inoda Coffee shop (in Kyoto since 1940) where we had a really, really good coffee!

And the adorable store Dot Dot (mentioned in my Kyoto Geisha post) where I bought a scarf and wallet with…you guessed it…dots! Bottom line is the neighborhood has a ton great boutiques, restaurants, and sites to see.

Also a note on packing. The seasons in Japan are very distinct and profound, so you will want to make sure that you pack correctly. We were there in late November and it was cold! Here’s a really great resource for the perfect packing list for Japan in the winter.

How about you? Have you been to a temple in Asia before? What was the neighborhood around the temple like?

These are such beautiful photographs!! The scenery is just amazing in Japan!! I hope to visit some day!

This looks like so much fun! And those dumplings.. YUM!

What a beautiful place, would love to visit one day myself!

looks like such an awesome destination! thanks for sharing :)

I'd love to go to Japan but I've never even been out of the country. I enjoyed learning about the history of Japan I school. Also, that is a nice dog!