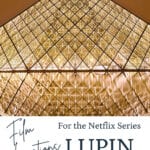 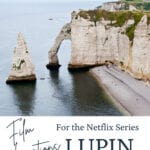 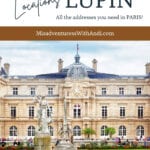 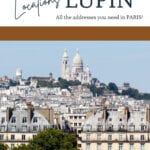 Mr. Misadventures and I just binged watched the latest rendition of the classic French character, Arséne Lupin, the gentleman thief featured in Maurice Leblanc novels. It’s called Lupin. One of the things we most enjoyed was spotting the locations where they filmed the series which I am sharing here! It’s kind of a hobby of ours whenever we watch anything filmed in Paris. We have been there so many times (50+ trips) that we make it a competition between the two of us.

In the very modern Lupin series that debuted on January 8th on Netflix (in French with English subtitles), Omar Sy plays Assane Diop, a man with his own history with Arséne Lupin. I adore Omar Sy! Americans might recognize him from Jurassic World (from 2015 he was the co-trainer of Chris Pratt, he is also slated for the 2022 Jurassic World: Dominion); Call of the Wild (2020 with Harrison Ford), or you may recognize his voice as the hot rod in Transformers: The Last Knight (2017 with Mark Whalberg) but you might not be aware that the film The Upside with Kevin Hart and Bryan Cranston is based on the French film Intouchables starring Omar Sy and François Cluzet.

But I love Omar from further back when I used to live in France in the oughts. He used to star in mini-episodes of SAV (Service après-vente des émissions), along with Fred Testot, which were absolutely hilarious! (Here is a mash-up on YouTube) French aren’t known for their customer service and these skits based on customer service calls mercilessly made fun of that fact in never-ending ways! So glad to see him starring in his own show.

But you didn’t come here for my fan rave about Omar Sy! You came to find out where Lupin was filmed. So let’s explore the film locations for the French  Netflix series! 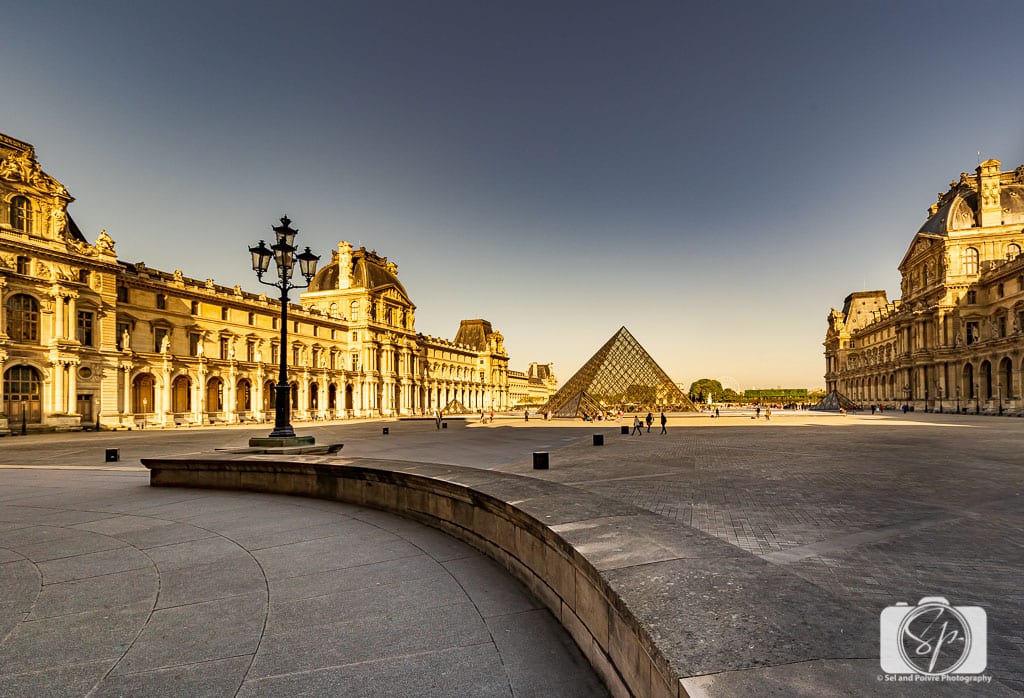 Here are the locations that show up in episode 1. Several of them show up in other episodes as well.

A large portion of the first episode takes place in the world’s (largest) most famous museum, the Louvre. This was easy and it’s equally easy to find! The Louvre is on the Right Bank side of the Seine right next to the Tuileries Gardin (Jardin des Tuileries) and 2 blocks from one of my favorite Parisian hotels (and a secret bathroom spot), the Westin. The cast got to spend the night in the Louvre to film the episode and Omar Sy spent 20 minutes alone with the Mona Lisa, what a bonus!

During the first episode, Assane meets his ex-wife (it’s unclear if they are divorced or just separated) Claire in a restaurant called L’Appartement. Through the window, you can see the arch of the Porte Saint-Martin.

Address: on the corner of 2 streets: 2 Et 4 Rue du Faubourg Saint-Martin and 96 Rue René Boulanger in the 10th arrondissement.

(Thanks to a reader for asking about this one!) Right after his coffee with Claire, Assane visits the guys he owes money to. You see him walking across a blacktop past and past the very unique entrance to the Conservatoire de Montreuil, a music and dance hall with live events constructed in 1976. The building is located in Montreuil outside of Paris.

Assane’s best friend (and fence), Benjamin has a shop in Paris’s most famous flea market which is technically not in Paris but a little outside. You can get to it via the Metro (Line 4 to Porte de Clignancourt).

The Pellegrini family’s hôtel particulier could be in a few spots in the city of Paris – my guess had been in the hills of Montmartre, but the scenes from the mansion are actually a museum, Nissim de Camondo Museum of decorative arts near Parc Monceau.

Address: 63 Rue de Monceau in the 8th arrondissement (although the Parc Monceau is technically in the 17th).

At the end of the first episode, Assane gives his son Raoul a book. It was the same Arséne Lupin noel (1 ina series) that his father had given him before he died. He gives him the book as they are walking over the Pont des Arts bridge. This bridge also has a prominent role in my beloved Sex and the City Paris.

Address: in the 6th arrondissement along the Seine. 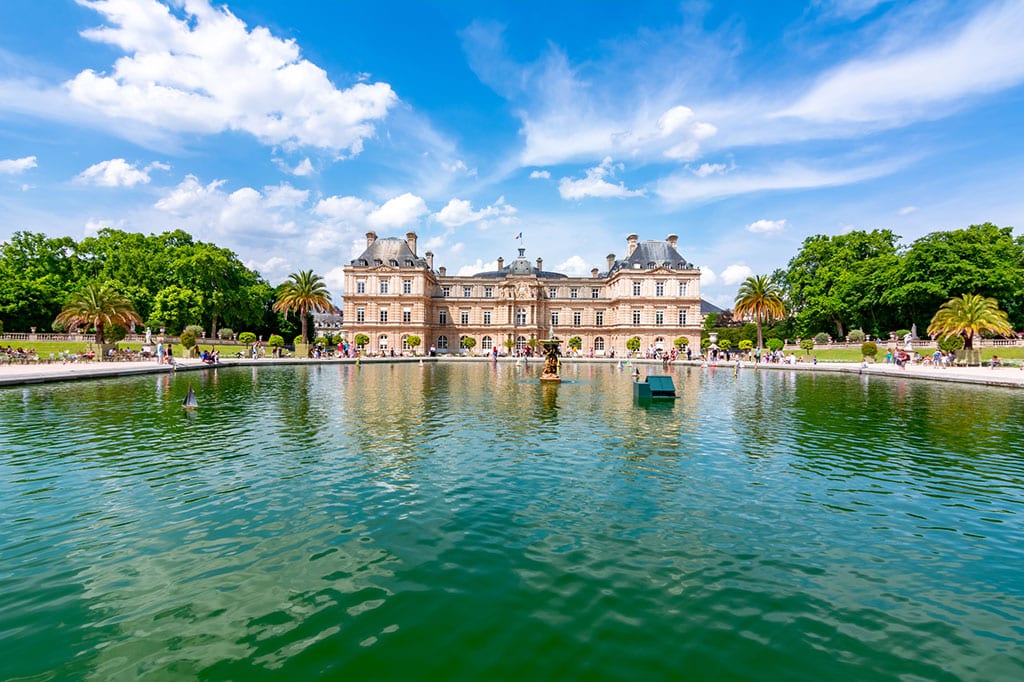 The story continues with more scenes with the Pelligrini family. Along with revisits to locations that were mentioned in episode 1.

This is where Assane meets Juliette Pelligrini to discuss the stolen necklace. We start to get the hint of a past relationship between these two that comes up a few times in the series and might have implications in the next season. Also in a flashback with his father, you see a young Assane walking on top of a fountain before the rain starts and they run into Mrs. (Anne) Pelligrini. That fountain is the Fontaine de l’Observatoire also in Luxembourg Garden.

(Thanks to a reader for providing this!) This is the hotel where Anne Pelligrine lives. You can see the logo on the glass doors or windows behind Juliette Pellegrini’s head when she was speaking with the front desk about getting a message. It is near Place Vendome and very close to the Westin where Mr. Misadventures and I have often stayed. I’ve walked by it a million times and I think this is where they filmed it.

Despite Paris being a single city, it is as you know, made up of arrondissements. And every arrondissement has a mairie or City Hall. The city hall for the 3rd arrondissement where Assane goes to encounter Commissaire Dumont is on Rue Eugène Spuller right across the street from the lovely Square du Temple – Elie Wiesel. Surveillance footage that the police review shows Rue Perrée which is a side street that the city hall exits on as well. 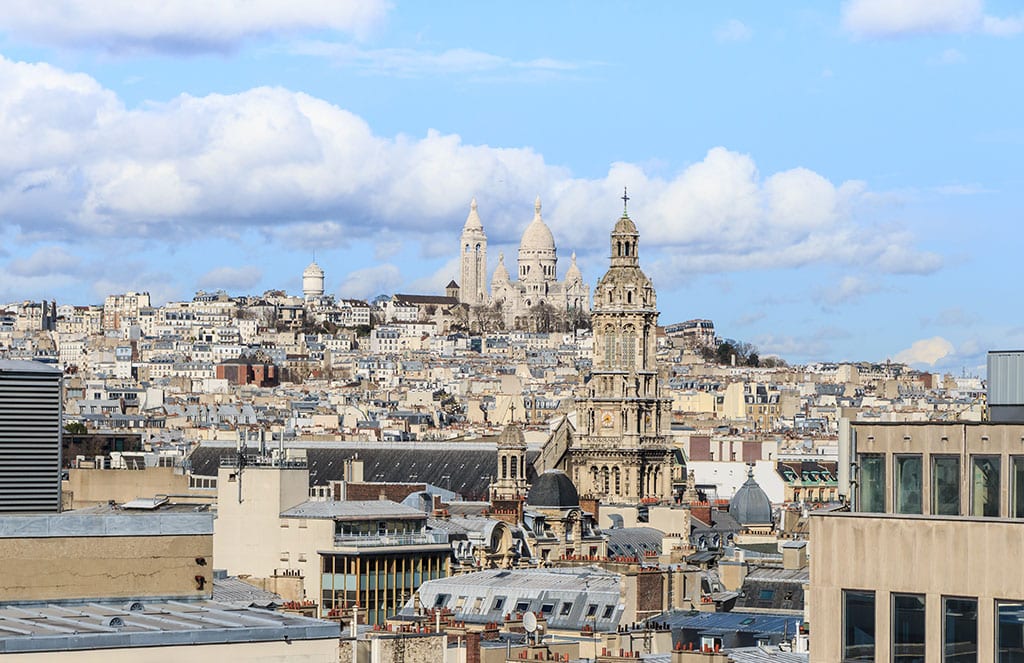 (There weren’t any “new” locations in Episode 4). Through the first few episodes, I was convinced that Assane lived in the 9th or 10th arrondissement because of some of the views near his “apartment” of Sacré-Cœur. I don’t have confirmation, but the first location listed below leads me to believe I am correct.

The street that Assane turns on after descending the stairs on his way to meet Claire and Raoul for Raoul’s birthday surprise is the Rue d’Abbeville. He realizes he is being followed and runs into the Garage d’Abbeville and through the parking levels to the roof where we see beautiful rooftop views and Sacré-Cœur before Assane climbs up and makes his escape.

In another flashback we see a younger Assane deploying his most gentlemanly charms on a rich older lady (fully decked out in a Chanel suit) who lives on the Rue de Rivoli. This is right down the street from the Westin and Angelina’s and across the street from the Louvre.

Address: On Rue de Rivoli near the Louvre in the 1st arrondissement.

The Train to Le Havre

In the final episode of season 1, Assane surprises his son Raoul with a trip to Étretat. To get there from Paris they had to take the SNCF train from Paris St-Lazare station to Le Havre. While on the train Assane talks about the Château de Fréfossé (also known as Le Fort de Fréfossé) no longer exists but is featured in the Arséne Lupin novel The Hollow Needle.

When the Diop family gets to Le Havre, Assane has a little surprise for the man that he encountered on the train (the same bad guy in the chase scene on the Rue d’Abbeville). We see Assane and the unsuspecting villain at the SNCF station in Le Havre.

Just before the final scenes of the 5th episode and season finale of Lupin, we see Assane and Claire walking on a bridge in the early evening discussing the due date of their baby, which happens to be December 11 or the author of the series Maurice Leblanc’s birthday. You can see the light on top of the Bastille in the scene. That bridge is one of the oldest parts of the Canal Saint-Martin, built in the 1800s.

Address: between the 4th and 12th arrondissements by the Port de l’Arsenal (boat basin) between the Seine and the Place de la Bastille.

The final scenes take place in Étretat in Normandy. Mr. Misadventures and I had a week planned right nearby for this May (2021) but that got postponed because you know The Queen (reference here) and I hope to get there in 2022! The beautiful and very photographed cliffs are a popular spot to visit given its proximity to Paris. As mentioned above the Hollow Needle famously took place here and there is a museum dedicated to Arsène Lupin called the Le Clos Arsène Lupin. And you can buy Arsène Lupin paraphernalia in town.

Address: (For the museum) 15 Rue Guy de Maupassant in Étretat.

Well, that’s it! The film locations from the Netflix series Lupin filmed both in Paris and in Normandy. I cannot wait to see season 2! If you want to watch more Arsène Lupin movies you can check out my former favorite from 2004 on Amazon Prime: Arsène Lupin (the cast includes Kristin Scott Thomas) and there is a 1932 version I haven’t seen available on Turner Home Classics. Or read the novels!

How about you? Did you catch another location that I missed? Do share! Are you a fan of the show? Do tell!

For a visual summary of this post, check out my Lupin web story!