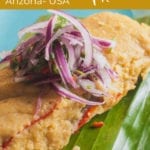 What is a tamale?

First of all, some of you may not know what a tamale is. Tamales are delicious packets of goodness, made with a corn-based masa flour that is stuffed with meat, seafood, cheese, or beans and enfolded into a corn husk (or banana leaf depending on the region) and steamed. Then either a red or green sauce is poured on top.

But why tamales at Christmas? Corn was an essential crop for the MesoAmerican farmers and food wrapped in corn, and corn husks served as an offering. From there, tamales began to be an essential part of holidays or special occasions like weddings, baptisms, Christmas, and these days, Thanksgiving.

If you are lucky enough to have Hispanic friends and family then during the holidays you will likely partake in a tamale-making-and-eating feast known as a tamalada. Making tamales takes work and the tamale making process is a social event that allows friends and family to catch up and to make bunches and bunches of tamales to share and enjoy. Please, will someone invite me to one?

Personally, I want to make tamales with Ms. Lagunas who I was introduced to by this NY Times article where she explains the tradition of tamales.

Where to Buy Tamales in Phoenix – Tamales For Sale!

The great thing about tamales is that they are often for sale at the shops and restaurants they are made in. They have both fresh tamales and frozen tamales to take home and enjoy later. Also, they make great party food!

I’ve asked some local metro Phoenix area bloggers to help me out a bit and they’ve got some great recommendations. So whether you are visiting Phoenix for the holidays (lots of people do!) or any other time of the year, check these tamale spots out!

From Taryn Jeffries of Phoenix Bites:
In the Southwest, tamales are synonymous with the holidays, so it goes without saying that there are options galore in the Valley of the Sun. When I’m organizing a holiday event or want to treat out of towners to some of the finest tamales in town, I don’t head into the kitchen; I place my order with The Tamale Store. With options like chicken chipotle, pork green chile, Arizona cornbread with Colby jack along with their sweet corn tamale, The Tamale Store has something that will please the palate of everyone you know.

I love that all the tamales sold here are made fresh daily in small batches and are great for those with gluten and soy sensitivities (mostly.) The tamales here are bursting at the seams with fresh, flavorful fillings and the masa they use is some of the best I’ve tasted. My personal favorite is the beef red chile due to the slow and steady heat of the red chile sauce and the superb fusion of Mexican spices. It’s the spirit and flavor of Arizona on a plate.

From Jessica Norah of Independent Travel Cats:
The family-run The Tamale Store has been on the list of “best tamales in Phoenix” every year since it opened in 2008. A few years ago, I saw one of these lists which encouraged my partner and I to order a batch of their tamales (chicken and pork) which are handmade from scratch each day. The tamales did not disappoint, they were delicious and generously filled with high-quality ingredients.

I’ve only tried a couple of their meat options, but they also have several vegetarian and vegan options that also sound really yummy. You can get their tamales by pre-ordering, going directly to their shop, or visiting their stand at one of the local farmer’s markets.

Since both Taryn and Jessica recommend The Tamale Store, I am heading over there first thing!

From Cacinda Maloney of Points and Travel:
My favorite place to buy them is El Bravo Mexican Food, I go to the one on 7th Street, but they now have a location at the Sky Harbor Airport too, El Bravo Sky Harbor! For 30 years, this restaurant has been making handmade tamales. What makes them so good? Well, for starters, they got the recipe from owner Lorraine Othon’s mother, who started the restaurant a long time ago. They use masa -a sweet, moist, and light dough.

Then, there’s the meat – tender shredded beef or chicken. Finally, the sauces – red and green. But the green sauce is actually my favorite. They then cover the tamale with a gravy and melted cheese!

A few other top picks for the best tamales in Phoenix:

How to Make Tamales at Home:

Of course, if you can’t get to Phoenix for tamales (are you sure?) you can make them at home. I love this post from Delicious Days sharing her grandmother’s story and tamale recipe.

If I was to try to make tamales at home, I think I would do what Phoenix food blogger, Emily Dixon of One Lovely Life did, slow cooker beef tamale bowls! And Cooking with Curls has a great Instant Pot version for red chile tamales.

They look so easy, all the reward, none of the hard work. (I do want Ms. Lagunas to know that if she did invite me over for a tamalada, I would definitely do the work!)

How about you? Have you eaten tamales in Phoenix and have a favorite? Do share!

For a visual summary of this post, check out my tamales in Phoenix web story!

YOU HAD ME AT TAMALES. Though, growing up in SoCal, I'd be interested to taste for myself the differences of an Arizona tamale! Hopefully I can visit sooner rather than later!

I haven’t been to Phoenix and I love to travel for food so this is a perfect post for me! Love your content in general.

I love tamales aaaaand will definitely have to check out some of these next time I'm in the area!

Oh my gosh, yummmmm.... One of our favorite foods. What a fun article. Thanks for sharing. I think I will make tamales for dinner now!

This post is making me hungry! I actually haven't tried tamales before but now I want to.