Having arrived, rested and thoroughly enjoying our first afternoon at Relais Chateau property Le Fort de l’Ocean, the next treat in store for us was dinner. As was customary at all our other stays on this trip, we planned to try out the hotel restaurant for at least one dinner.

After being on the road so many days and eating a lot of rich meals I can honestly say I wasn’t really looking forward to another three-hour multi-course dinner. But I was a sport and went along with it. After all, we had eaten excellent meals at Chateau Richeux and Hotel Brittany. The competition was fierce.

And oh my goodness did they nail it! Well, actually chef Guillaume Brizard did. At the end of the meal, we spoke with the hotel manager because we wanted to compliment the chef on such a fantastic meal. I told her he deserved a Michelin star. She promptly informed us that he had just got it! It was announced in March and they were extremely proud. And I happily agree, it is well earned.

Our meal was extraordinary. There were several courses, but each felt light, delectable, and filled with amazing and subtle flavors. The meal I am about to share was 60 Euros a person (I could choke when I think that I paid 65 Euros for the lobster at Hôtel de la Plage!) not including the demi-bottle of white wine we shared plus a couple of champagne to start the meal.

The light in the restaurant was lovely. The table settings looked beautiful against the fading sun. 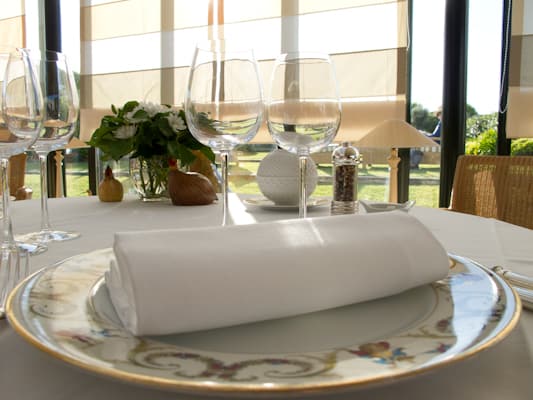 We ordered champagne and were served a plate of amuse-bouche as an apéro including a cold carrot soup that tasted as if the carrots had just been picked out of the garden, which they likely had been! 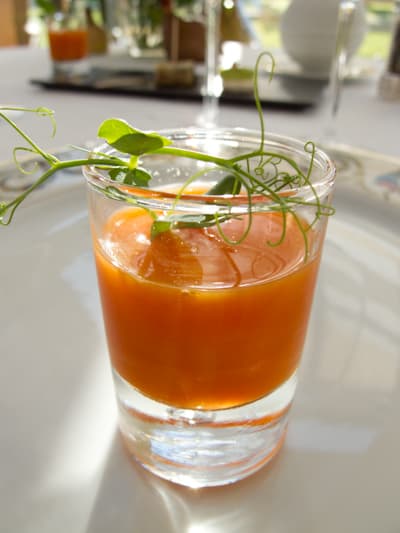 Apéro complete, we began our meal with another amuse-bouche that consisted of cabillaut and petit-pois (fresh spring peas) with a little bit of ham and cracked pepper. Again the peas tasted like they just came off the vine. The fish was just barely cooked and practically melted in your mouth. 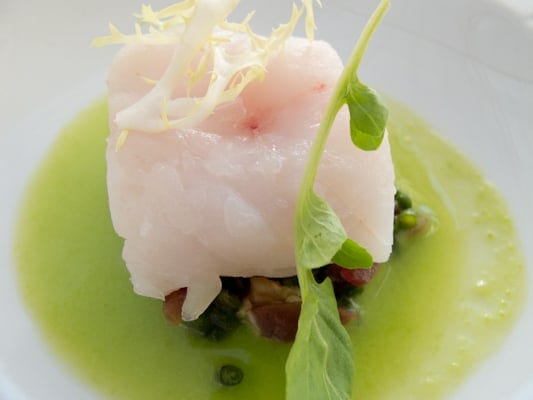 As an entrée, we were served local lobster and langoustine. The langoustine was served on a skewer just barely touched by the grill and the lobster was served sushi-style in a seaweed wrapper with some black roe. 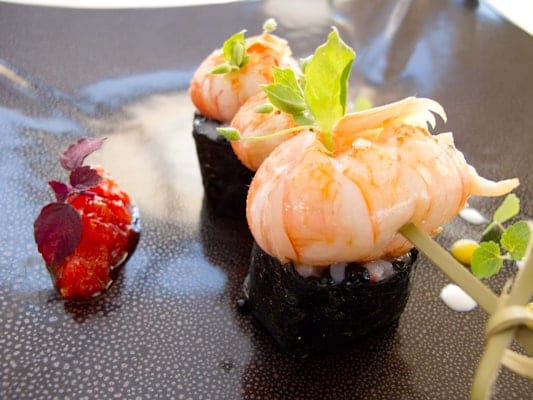 Next came a salad with jellied beets, radish, and smoked salmon. Divine! 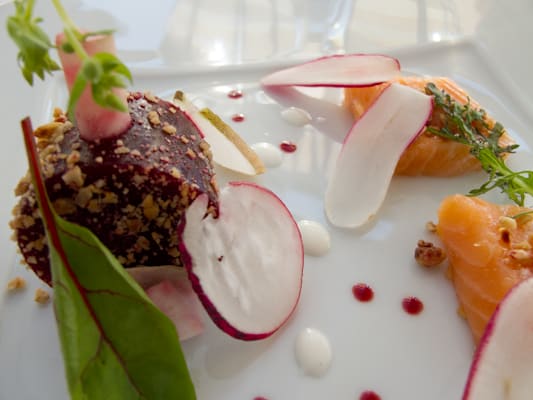 Between courses, we ate house-made bread with local butter made with seaweed. We didn’t need to eat the bread and butter, but it was hard to stop ourselves! 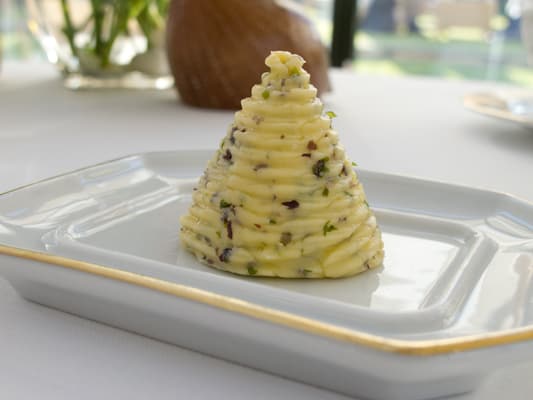 House-made bread with local butter made with seaweed

Finally, the main course arrived. Rabbit and carrots served three ways. The rabbit was the best I have ever eaten (sorry Mr. Misadventures who makes a darn good roasted rabbit). It was cooked rare-to-medium-rare and so refined. The true flavor of the meat was not hidden by a heavy sauce but simply accentuated by the carrot. 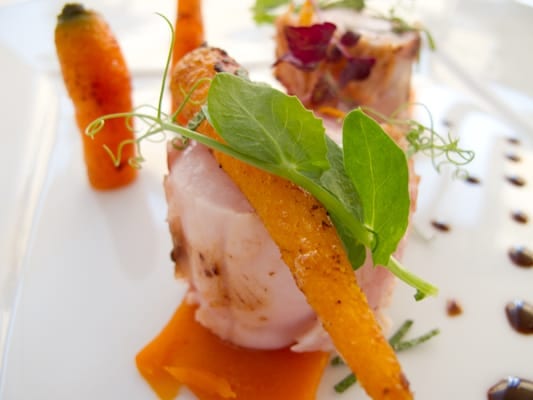 Up next was the cheese course. It was two cheeses served together. A goat-cheese infused with chive prepared to the consistency of crème-fraîche served on top of black bread and a very creative variation of a petit bûche goat cheese rolled in corn flakes (!) and served with a mini salad. 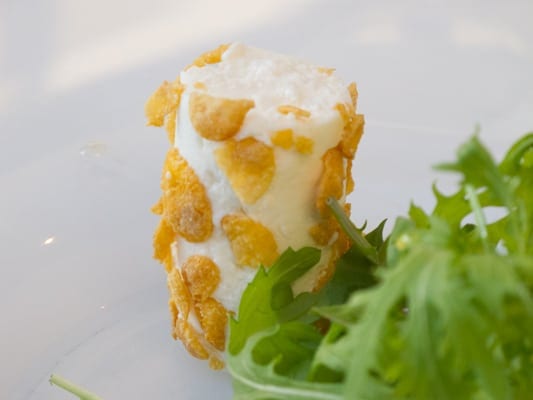 Goat-cheese infused with chive prepared to the consistency of crème-fraîche.

Dessert was a series of mini items, all agrumes-based (lemon, orange, grapefruit) and all lovely. 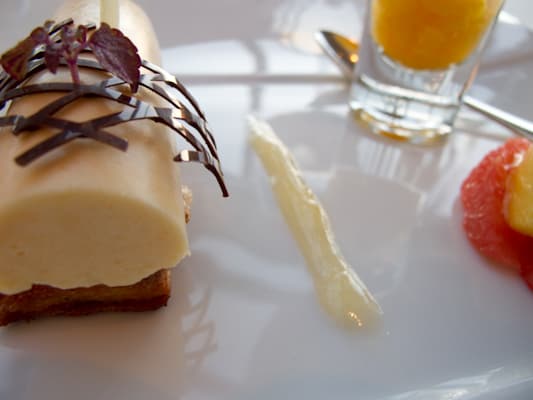 Coffee was served with a plate of mignardises, I wanted to cry “uncle” but I could not find it in me to deny myself the orange and banana smoothie, the apricot pâtes de fruits, or the chocolate and banana truffle! Could you have? 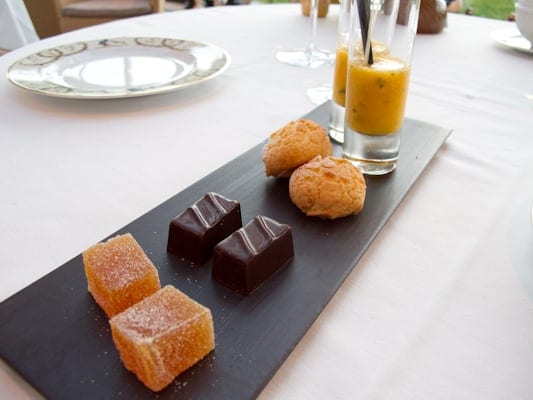 After complimenting the chef and learning that they had just been awarded their first Michelin star, we retired to our room to watch the sunset over the water and to count our blessings. 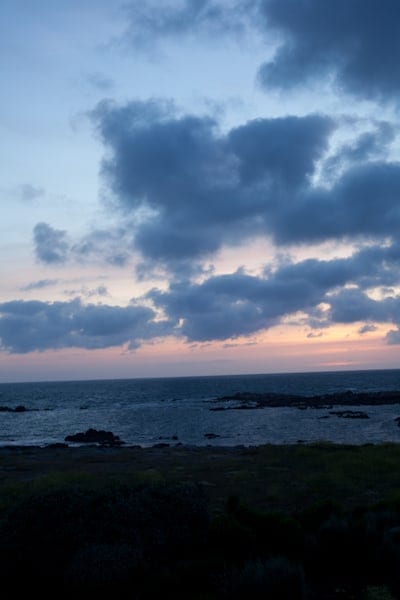 The next day we would begin exploring our last little corner of Brittany before returning to Paris.

You brought it to my doorstep in Oklahoma, Andi. My mouth was watering. Divine. Your photography just keeps getting better and better, too.

Wow what beautiful dishes! Everything looks so fresh and light. The portions look perfect too.

@Danielle, they were and it was a great meal.