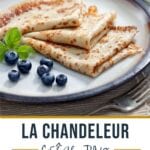 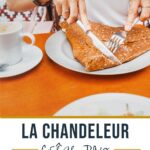 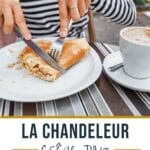 If you like crepes (crêpes), France’s paper-thin pancakes that melt in your mouth then you will love La Chandeleur. Chandeleur or La Fête des Crêpes is France’s annual day of crepes celebrated every February 2. As early as a week before the big event you’ll find supermarkets stocking up with ingredients. Everyone will be making, eating, and sharing France’s version of the pancake.

I grew up eating crepes on special occasions (maybe it was this that was the humble beginnings of me becoming a Francophile!) with my family. We typically ate the sweeter version with strawberries, whipped cream, peanut butter, etc. It wasn’t until I started traveling as an adult that I ever tasted the savory version called a galette. It’s no coincidence that Brittany (where the crêpes is a quintessential part of their traditional cuisine) is my favorite region of France! 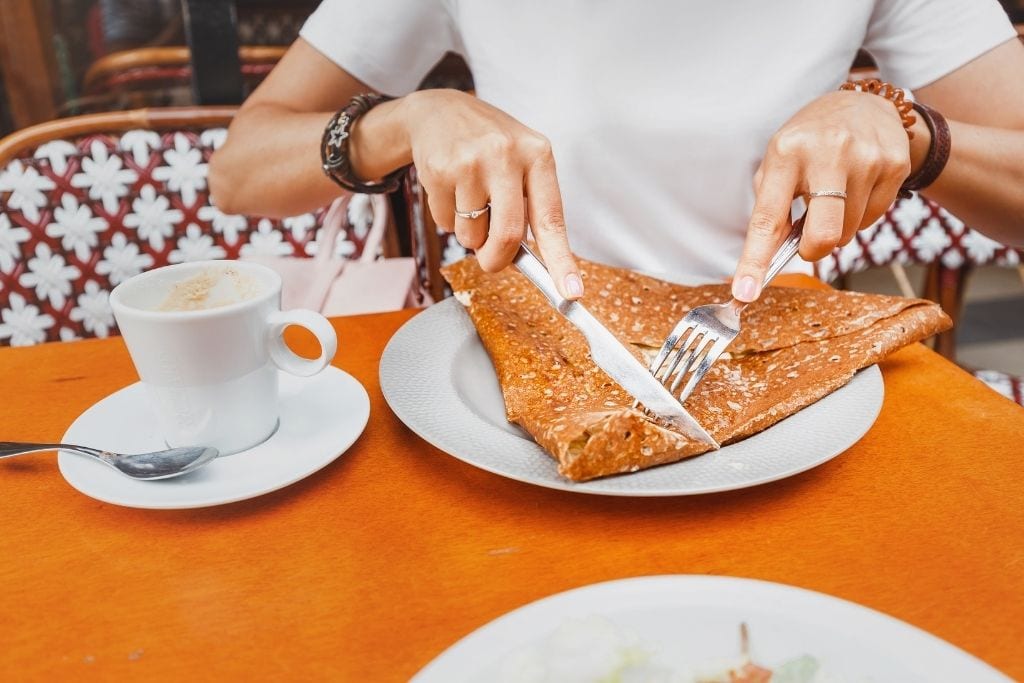 Nearly every year, Mr. Misadventures makes crepes for my birthday (as well as at other times throughout the year) and he is always looking to perfect his recipe. I am the happy guinea pig that tastes all his versions and creations, including a low-carb version! 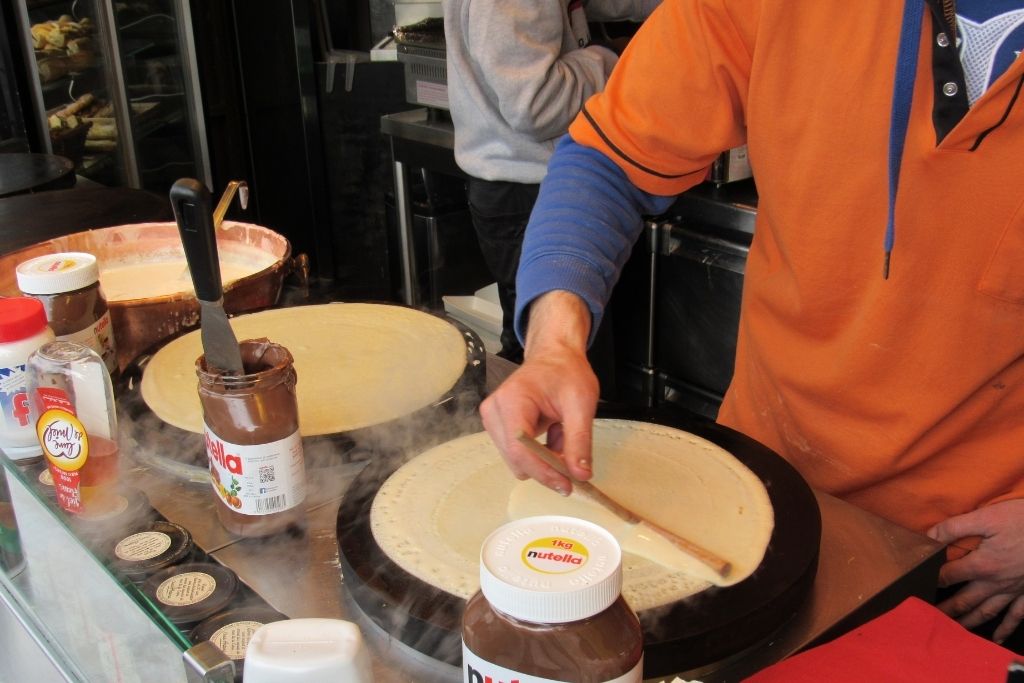 Crêpes don’t just satisfy a sweet tooth (the crepes you can buy on the street with Nutella, that is a sugar bomb!). Chandeleur dates back to Roman times and has deep religious and cultural significance.

The History of the Chandeleur Festival

Chandeleur is a mix of both pagan and Catholic traditions. Originally, it was held in honor of Pan, the God of Nature and the Wild. When Catholicism spread through France, Pope Gelasius I re-appropriated the pagan tradition—which fell exactly 40 days after Christmas Day—to honor the time the Virgin Mary presented the baby Jesus to the temple.

Torches were replaced by candles, which represented purification and light. This is why the festival is called Chandeleur, from “chandelle” or the French word for candles. The name is sometimes anglicized as Candlemas.

But what do crepes have to do with religious rites? The round shape is said to symbolize the sun or the source of life and light. The tradition of making and sharing crepes, and families gathering together for a feast, echoes the historical tradition of popes giving food to the poor during Chandeleur/Candlemas.

The French famously have a strong separation of church and state, called laïcité, but that doesn’t preclude them from enjoying crepes on this day, even if someone isn’t Catholic. If it has to do with food, the French as going to celebrate it!

Since Chandeleur has pagan roots and is one of the oldest “festivals” in France, it’s no surprise that it also has many rituals and superstitions associated with the day that has little to do with Catholic symbolism.

Lucky coin
According to superstition, if you can flip a crepe with your left hand, without dropping a coin with your right hand, you’ll have a prosperous year. Others would put a coin on top of the crepe, to fill the year with money and luck. This superstition was very popular before but is not widely practiced today—unless it’s for fun, or to show off your mad crepe-flipping skills.

First Crepe of the Crop
People used to save the first crêpes they made in a drawer, and keep it there for the rest of the year. Hmm, wonder how moldy that got??!!

First Sign of Spring
Similar to the North American tradition of Groundhog Day, there’s a prevailing superstition that if Chandeleur falls on a rainy day, there will be 40 more days of wet weather. But if it’s clear and sunny, then winter is about to end soon. There are actually many songs and proverbs that center around Chandeleur and weather, which reflect France’s agricultural traditions and the significance of any festival that falls in the tail-end of winter.

Farmers hoped for signs of a good farming season and would pray for good weather for planting. In fact, the crepe was probably chosen as a symbolic food because it was a convenient way to use up any leftover flour that had been stored over the winter months.

While the rest of the world often sees crepes as a breakfast or brunch dish, during Chandeleur it is actually eaten for dinner. It is typically served with cider, which is drunk from a round bowl—another reference to the round sun—rather than the typical glass. Traditionally, people would also attend mass and light candles in their homes, and towns would hold processions with children singing songs that celebrate the faith. France was a Catholic stronghold and Chandeleur an integral part of the Catholic calendar—much like Advent, Christmas, and Lent.

Today, the festival has lost most of its religious significance and has become simply part of the French culture. It now celebrated even by non-Catholics and is generally seen as a special day of feasting. Families and friends will gather, and often decorate their homes or prepare good food—and not just crêpes!

How to Celebrate Chandeleur Anywhere in the World

Duh. You eat crepes! You don’t have to be French to celebrate Chandeleur—personally, the Misadventures family isn’t religious or bug on holidays but we will use any excuse to have crêpes AND cider (this is one of our favorites)!

How to Make Crepes 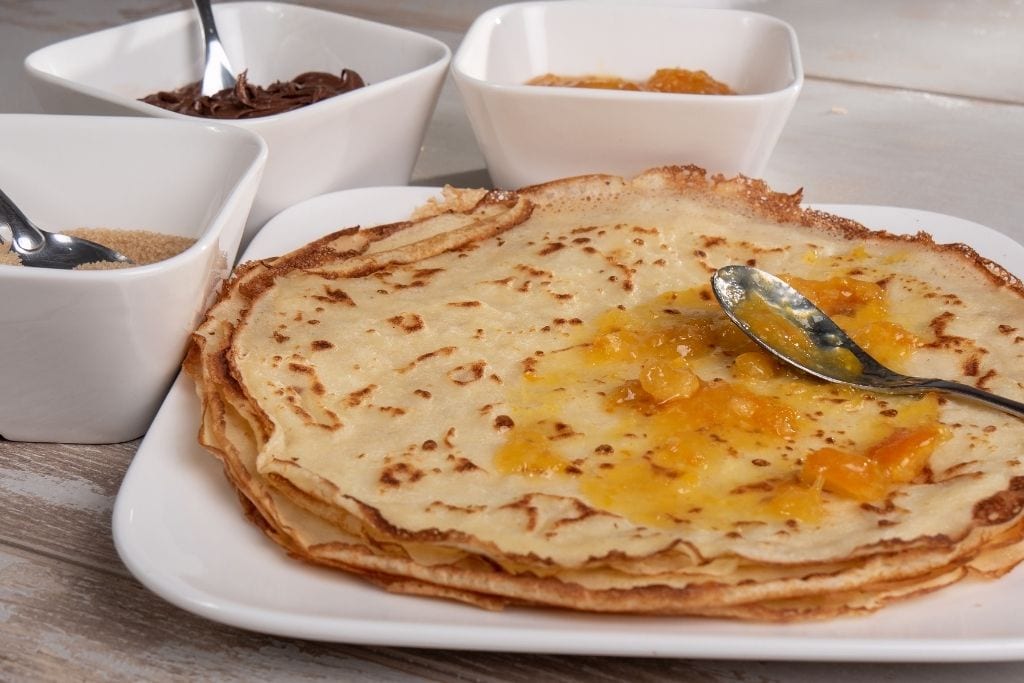 The basic recipe (for either the savory or the sweet) only needs a few ingredients. And as I mentioned, we’ve even managed a low carb version at the Misadventures household. You will find that many crepe recipes give exact measurements. And I think that is fine for the first 1 or 2 times you make the batter. Afterward, it’s all about feel, how liquid-y your batter is, etc.
Some people like to chill the batter before cooking it, which makes it easier to control the texture and consistency of the crepe. But that’s a matter of preference—you can completely skip this step if you don’t have time.

To make crêpes, you need a non-stick skillet. Add butter (or oil) to the pan, and then pour a small amount of batter (about 3 to 4 tablespoons) and quickly swirl the pan so it spreads out and becomes thin. Flip the pan when you’re ready to cook the other side. Yes, there are special pans for making crepes and we certainly have one (we’ve had both Creuset and Staub), but it isn’t mandatory.

Next is the best part: picking a filling. Crepes can be sweet or savory, and you can pretty much put anything you want. Some people like fruits, others like jam or hazelnut spreads. Others prefer putting salmon, ham, or cream cheese. Personal favorites for me are ham and cheese, ham and cheese with an egg, or ham and cheese and mushrooms. For a sweeter crepe, I like salted butter and sugar.  You can also serve a crepe plain, or drizzle it with confectionary sugar or syrup. Just adjust the sweetness of the crepe with the toppings in mind.

Here are some recipes I recommend:

The best crepes in Paris

In Paris, there are many restaurants that serve excellent crepes. I eat at least one meal with crepes (but usually itis more!) on every visit to Paris. My favorites are:

La Chandeleur is not just France’s national crêpe day. It’s a celebration of rich culture and cherished traditions. While some superstitions and rituals have been lost over the centuries, it did retain the most wonderful part of the Chandeleur: sharing good food with the people you love. 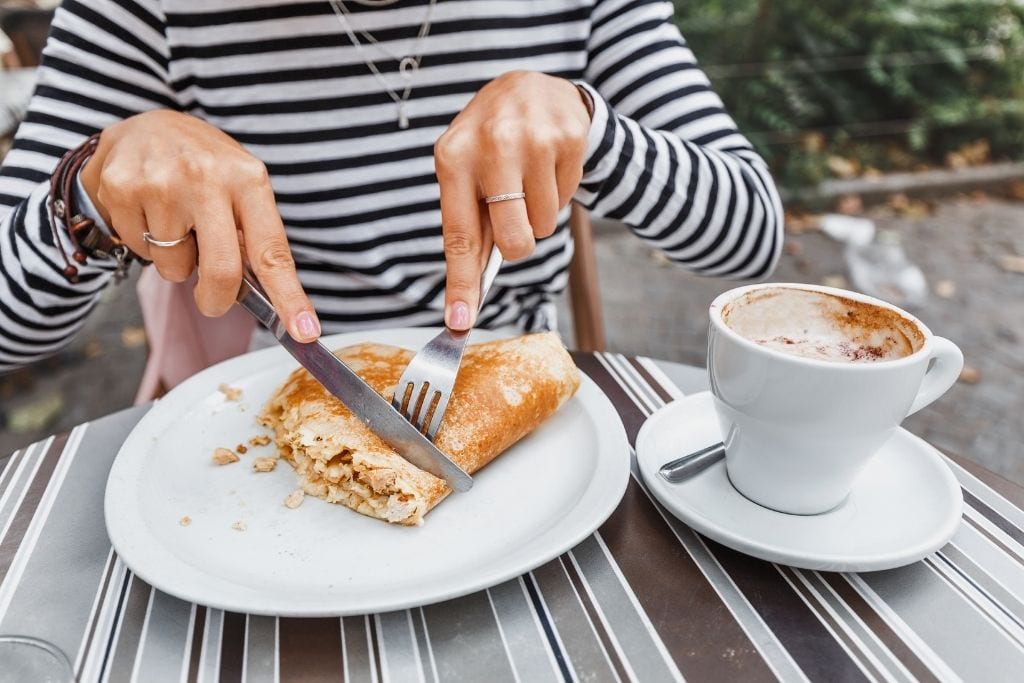 How about you? Have you had crepes? Are you a fan? Do tell! Where have you had great crepes around the world? Is there are great crepe spot where you live? What’s your favorite way to eat crepes? Do share!

For a visual summary of this post, check out my chandeleur web story!

Why is Paris called the City of Love?
← Previous
Paris in February: Things to Do, Events, Weather and What to Pack!
Next →
Click here to cancel reply.

I've made crepes before using my Le Creuset and Staub. Both products are pretty similar but I think Le Creuset does a better job than Staub.

Marking my calendar for next year,this will be a holiday I'm celebrating for now on! 😋

Yum! I want to have this! It looks absolutely mouthwatering! I can't wait to visit this place.

What an awesome holiday! I'm not good at making crepes, and I wish we had a nice crepe place around here. I would love to enjoy some good crepes like this.

Crepes are delicious. I've not had some in a while. I usually end up with thick pancakes.