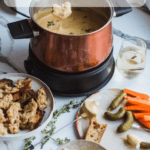 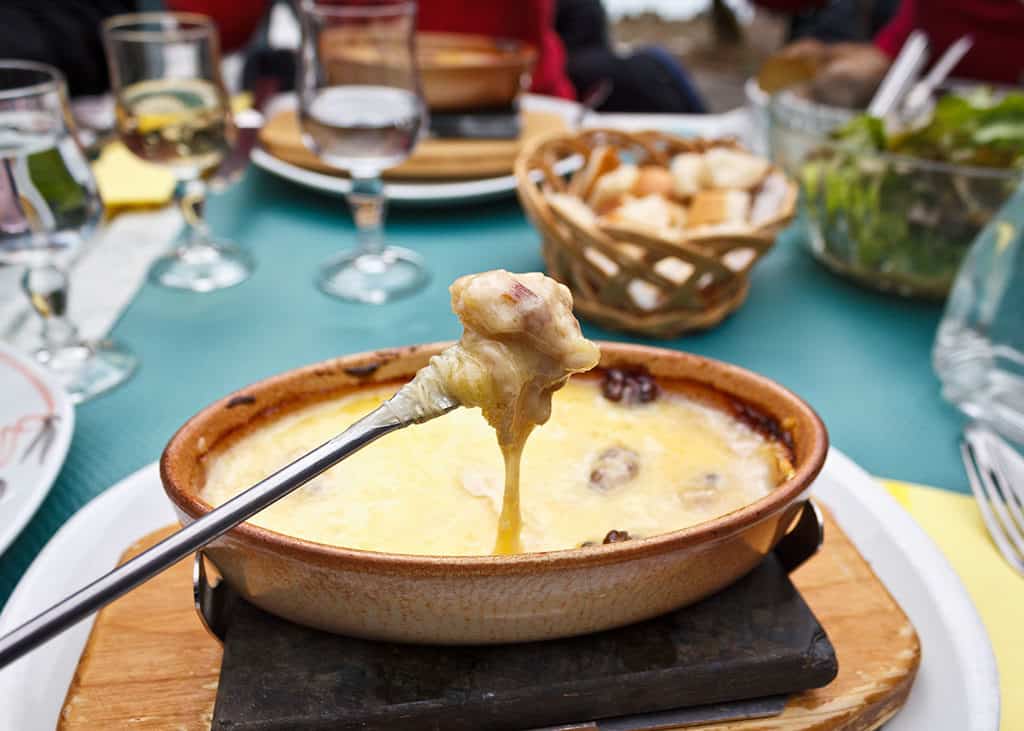 Love cheese? So do I. I worked in Switzerland for 3 years and had a variety of fondues, cheese raclette, and tartiflette. Most people don’t realize that these foods are not “Swiss” only, that they are more regional in nature and come from the area around the mountains in both Switzerland and France. Specifically in France, Savoie and Haute Savoie. Not surprisingly, these are popular après-ski dishes. They’re also kind of meant to be social meals that you eat in a group. When I returned back to the United States, from time to time I would miss fondue, but it is actually readily available in Paris, so on some trips, especially in the winter, I make a point to partake in cheese raclette, fondues, and tartiflette in Paris.

What is the difference between fondues, cheese raclette, and tartiflette?

Tartiflette is made with reblochon cheese, potatoes, lardons (or with thick bacon, diced pancetta, or cured pork belly), and onions. You can find tartiflette a lot in the outdoor holiday markets as well, usually made in a huge cast iron skillet somewhat like the large paella dishes. When made individually it looks like a gratin.

Raclette Alpine cow milk-based semi-hard cheese. The term raclette means to scrape and that’s exactly what you do to eat it. The cheese is heated on a device (or raclette grill, the home version looks like this) and then the melted part is scraped onto boiled potatoes, but sometimes vegetables as well. This dish is certainly more Swiss than French, but the French do eat it. When I have eaten it with French people (as opposed to Swiss) it has been served with cornichon.

Fondue is a meal prepared in a communal pot, usually one of a variety of cheese and eaten by dipping bread into the cheese using long-stemmed forks. Most cheese fondues are made with 3 main kinds of cheese, either alone or in combination: Gruyere, Cheddar, and Emmental. However, lots of different cheeses may be used. White wine is melted into the cheese. That is fondue at its most basic, but I have had fondue with garlic, with tomatoes both so delicious!

Best places for Fondue in Paris

Auteuil Brasserie (78 rue d’Auteuil, 16eme) lovely heated terrace, BUT only open until 2 pm, so go there for lunch and then take a BIG nap!

Le Refuge des Fondues (17 rue des 3 Frères, 18eme) in the heart of Montmartre this is one of the most fun restaurants you might visit. Why? Basically for two reasons: You’re sitting at long communal tables, and you are served wine in baby bottles.

Pain, Vin, Fromage (3 Rue Geoffroy l’Angevin, 4eme) very popular spot, the restaurant is small and cozy, reservations are a must!

Paroles de Fromagers (41 rue du Faubourg du Temple, 10eme) the owner is a cheese expert, so you will be in good hands!

Rural by Marc Veyrat (Palais des Congrès, 2 place de la Porte Maillot, 17eme) when we stay at the Meridien Etoile this restaurant is right across the street. Marc Veyrat is a master of the regional food where these cheesy dishes reign.

Saveurs de Savoie (83, Rue Mouffetard, 5eme) they cook authentic fondues and also raclettes in a familiar, typical French atmosphere. The owner is a great host and both food and wine are awesome.

How about you? Have a good Paris fondue recommendation?

Thanks guys for improving the tips!

I love fondue and I LOVE le Refuge, but as far as cuisine is concerned, it's not really the best fondue. It's basically a pot of white wine with some melted cheese in it, and you can get pretty drunk on just the fondue. Don't get me wrong, I love it, but if you're looking for an authentic experience and a really good fondue, it's not the best place in Paris to go.

I haven't had a great fondue in Paris, but there is AMAZING raclette at Le serpent qui danse. If I remember correctly, they have fondue as well.

@Emiglia, thanks so much for the raclette suggestion, I will have to check that out!

Oh wow! I have never thought of making fondue and am glad to know these tips before even attempting it. Like .. perhaps never? :-)

@Jennie, I've never done it either - we've done raclette, but not fondue

Andi of My Beautiful Adventures

Gosh, I haven't had fondue in FOREVER, now I'm craving it!

@AndiP, it is definitely an awesome fall/winter feast - but you need a nap after having it !

My husband got sick so bad at Le Refuge des Fondues once. He had to take a bus back home cause the group had stayed out so late. He ended up throwing up on the bus and outside it. Maybe something was off that night but he's never wanted to take me there.

@Christina, the same things happened to my husband at La Biche au Bois - which is an amazing restaurant that I will probably never get to go to again!