If you had told me that I would visit White Pocket twice in one year, I would have told you that you were insane. But Mr. Misadventures was so enamored with the area when we were there during our 10-day roadtrip that we returned to camp there for 24-hours so that he could take photos at sunrise and sunset.

It was to be a quick trip. I flew into Las Vegas on a Thursday evening in December (we were going to have a nice dinner on the strip, but that didn’t turn out so well). On Friday morning we headed to Whole Foods for picnic supplies and gently made our way three and a half hours up the road to Kanab, Utah, the starting point for our adventure.

In the evening we headed to Coral Pink Sand Dunes State Park for some sunset photography. It is a 40-minute drive from town (although it felt much shorter) and a fun spot to play around on the dunes (when it is warmer). As it was December and not warm, we just set up the camera equipment for the sunset and focused on warm thoughts!

On Saturday we were ready to get to the reason why we were in Kanab, photographing White Pocket. To do that we met up with our old pal, William, owner of Dreamland Safari Tours, who we had once again hired to be our White Pocket guide. We had such an exceptional experience in May that there was no doubt in our minds who we would turn to for this trip. Dreamland Safari Tours is the premier provider of guided Southern Utah Tours and the exclusive regional provider of Toroweap Tours (super important if you want to have a great tour of the Grand Canyon’s North Rim). They rock. Seriously!

William had taken care of everything, his truck was loaded with the camping gear we would need plus food and water supplies. All we had to do was bring ourselves, our clothes and our cameras!

It takes about three hours to drive from Kanab to White Pocket and we passed the time easily chatting about the area including making a few stops for adhoc photos like these moqi marbles, little (some large) pieces of iron concentrate and hematite which are over 180 million years old. That’s right I said millions. And they are everywhere! 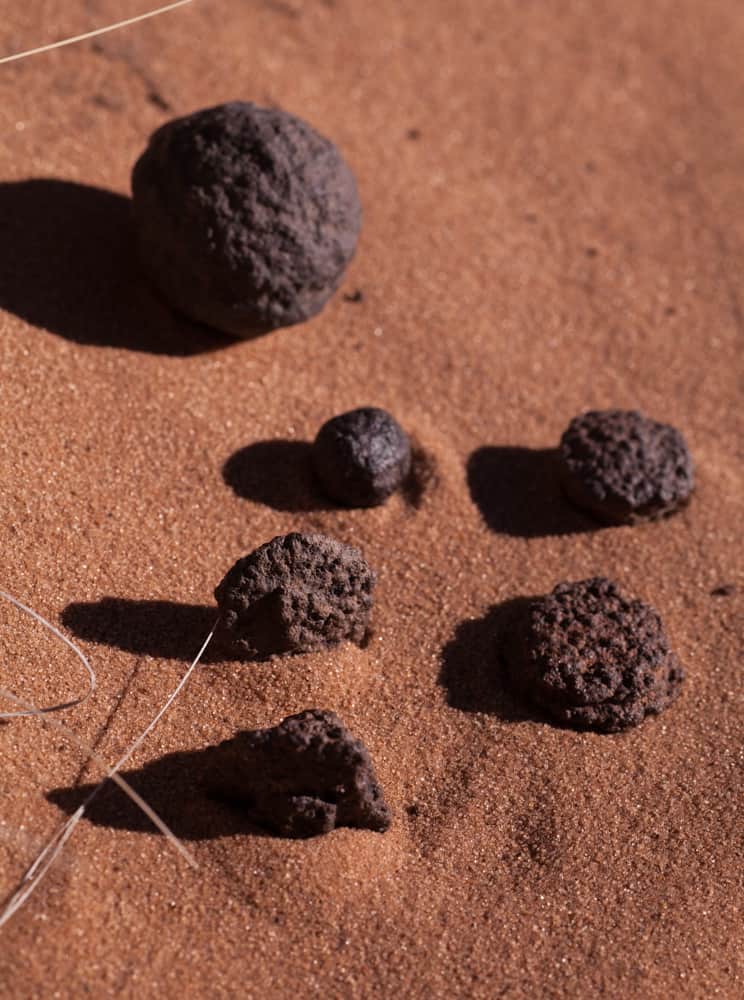 We made it to the entrance of White Pocket and our home for the next 24-hours and headed out to set-up our equipment while William started unpacking gear, starting a fire and prepping dinner. It was cold. Very cold. The temperature was in the upper thirties, but it was the wind that chilled you to the bone. But you must suffer for your art right? And here is me suffering! 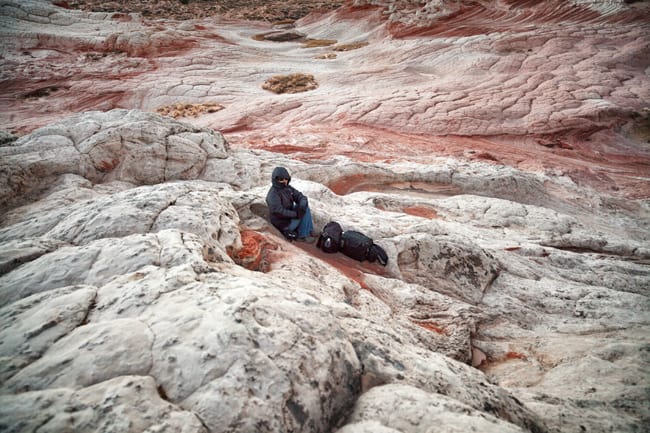 It is not as bad as it seems. Don’t get me wrong, I was cold but I also had 4 layers on and wasn’t going to freeze to death! And as you can see, the photos that Mr. Misadventures captured are worth it. 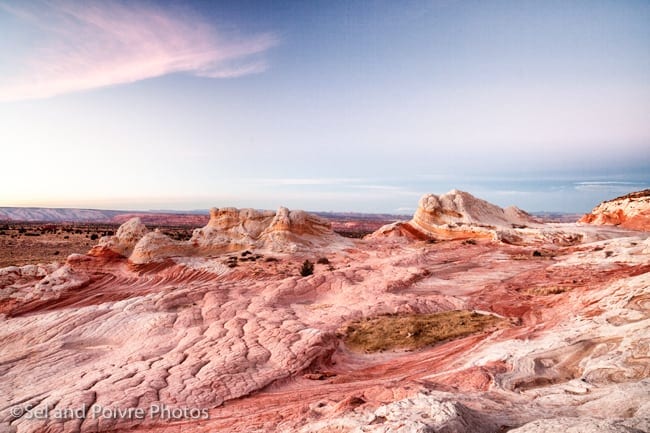 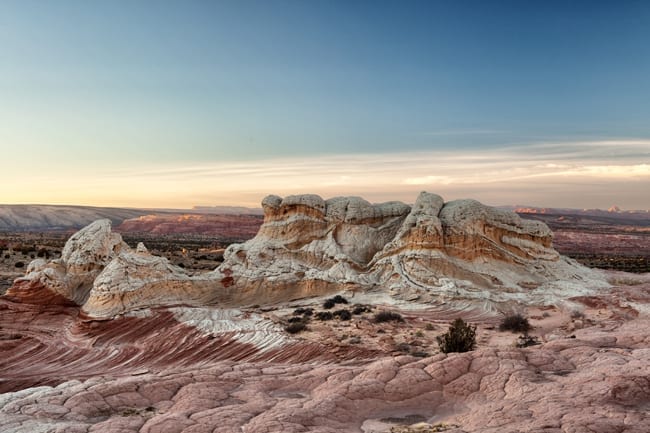 Once the sun went down, Mr. Misadventures and I headed back to camp where William met us with a roaring fire and pre-dinner appetizers, a man after our own heart!

Because of the wind, setting up the tents was more than a single-person activity, so we pitched in to get the tents set up. Little did we know that underneath the sand in the spot we selected was a whole bunch of dead cacti with thorns that still could do some damage. Mr. Misadventures does everything with gusto and ended up with these little thistles all over his hands. (And the next day, despite being super careful, I got them on my upper thigh…sigh, that is why this spot is called misadventures….).

They only stung a little bit and it wasn’t enough to ruin our dinner masterfully prepared by our host. When you are cold and hungry anything tastes good, but who doesn’t like steak and potatoes and Brussels sprouts cooked out in mother nature?

We spent some time looking at the millions of stars and multiple constellations that were visible in the unfettered-by-city-light sky. But after awhile the effects of the wind and the cold had us pretty tuckered out and we made our way to bed. I slept in two layers including ear muffs, but we also had plenty of duvets and sleeping bags to be comfortable. When the alarm went off at 6 a.m. I only had to stick one toe out to know that I was not going to be attending the sunrise photo session. It was bitterly cold!

I get to enjoy the sunrise the same way you do, in photos. 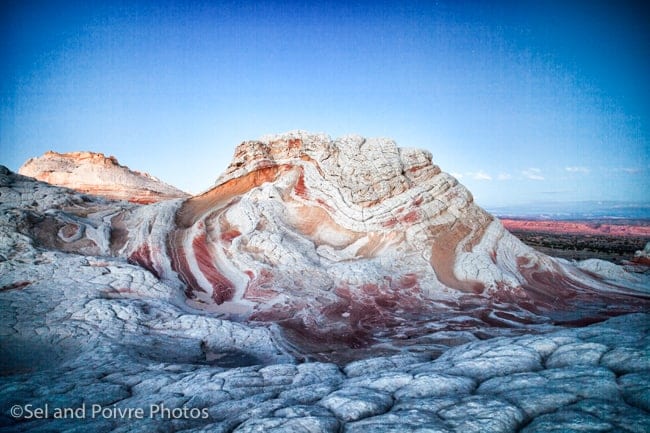 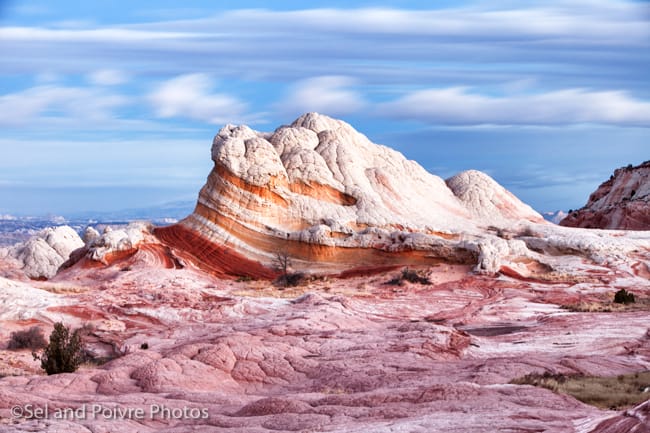 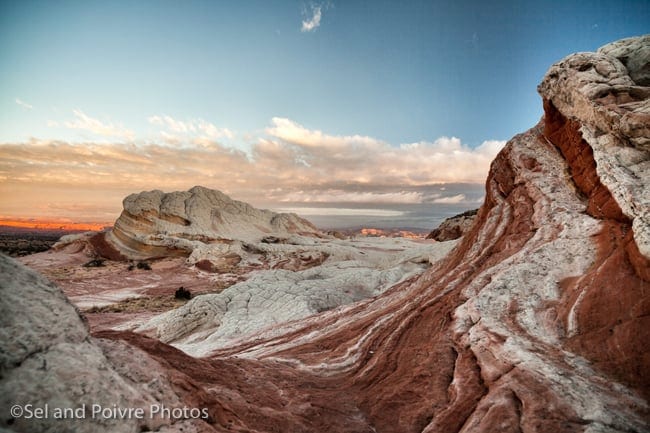 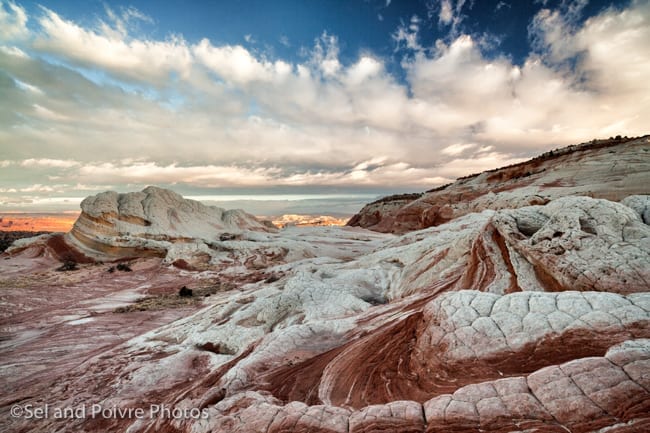 Instead of witnessing the sunrise, I slept two more hours before joining Mr. Misadventures for the after-sunrise hike around the area. The wind was less of a factor but there was a storm threatening to make a presence. It sure did make for dramatic clouds. 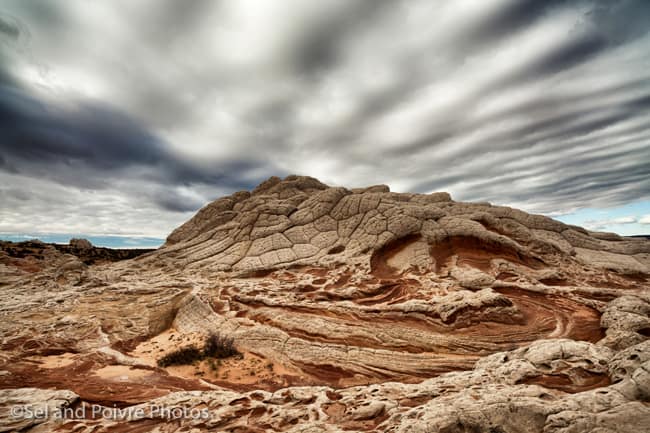 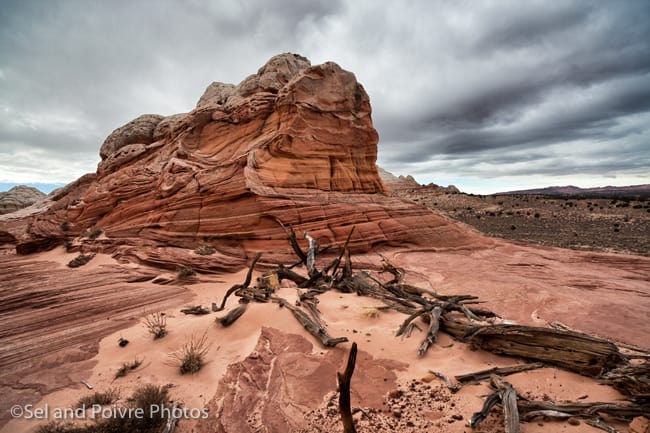 After spending an additional hour or so capturing the last of what we could, we headed back to camp for breakfast. Once again William came through with hot coffee and hot eggs, just what we needed to revitalize ourselves for camp tear-down. The wind decided to pick up a bit which made folding the tents a lot of fun, but we got it done, the car loaded and headed off down the road back towards to Kanab. Once there, we returned to Vegas for our flight home.

I can’t say that camping in thirty-something degree weather in December in the desert is something I want to do every day but it certainly was an experience and it wasn’t as bad as I thought it was going to be. It was really cool to see the changes in the rocks with the light of a different time of year and we had another fantastic experience with Dreamland Safari Tours with plans to hire them again for future trips.

So how about you? Have you done any winter camping or something equally as dedicated in order to get a shot (or do something else)?

NOTE: All photos except the first two were taken by Mr. Misadventures.