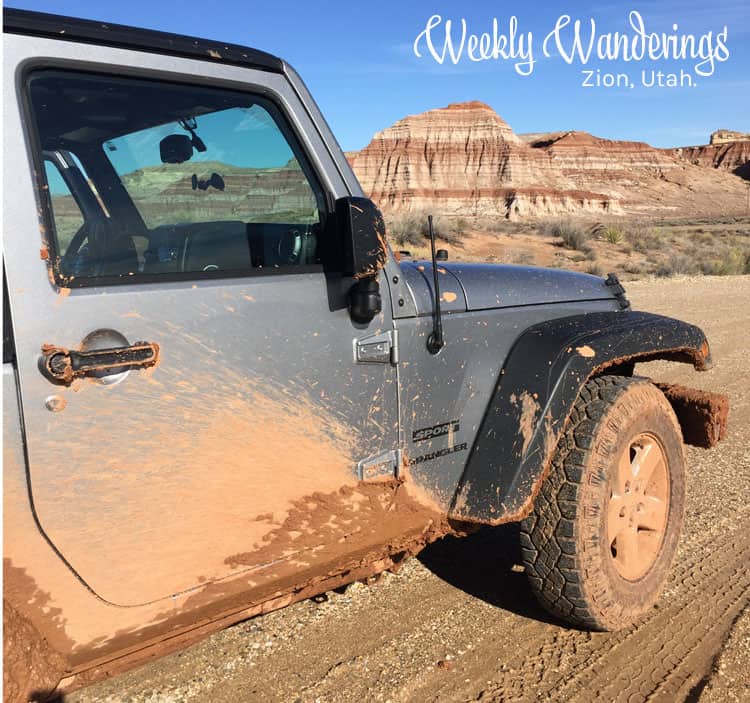 As you know from last week’s Weekly Wanderings we visited Zion National Park on Thursday in the rain to scope out shooting locations. On Friday it rained in the morning so we spent it in the St. George’s Starbucks catching up on all things digital and then was checked out Snow Canyon State Park followed by a late afternoon-turned-sunset visit at Kolob Canyon.

While we were doing that on Friday, this was happening in Zion. 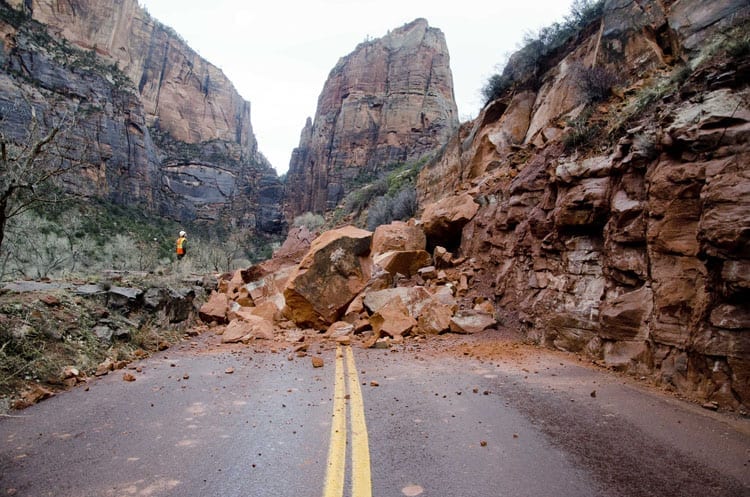 It has greatly curtailed our plans to say the least. The clean-up will likely not be complete before we leave.

We had a small boulder fall on the road in front of us when we visited Kolob Canyon on Friday afternoon. The sound of just that one rock sliding was incredible. I can’t imagine what the sound of this huge rock slide was like!

Sunday we got up for sunrise in Snow Canyon followed by a hike in the petrified dunes. 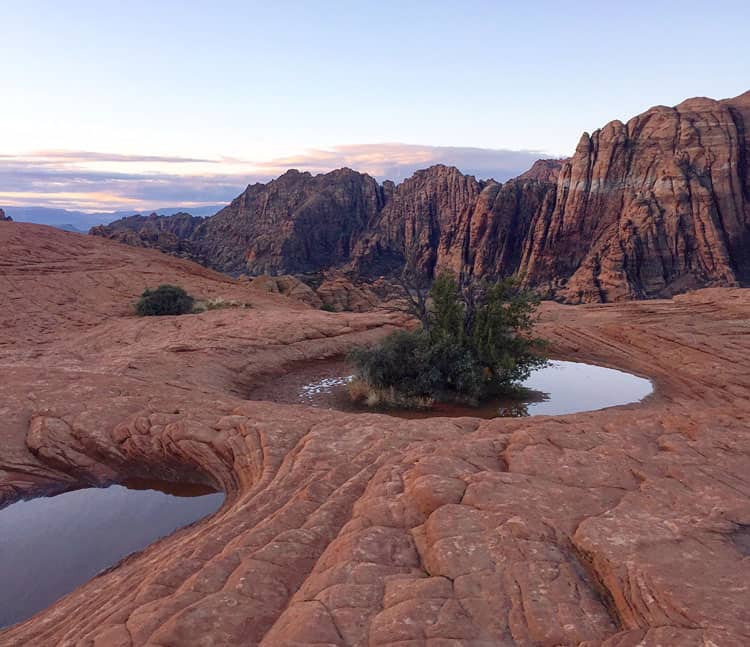 Sunrise at the Petrified Dunes in Snow Canyon State Park.

In the afternoon, we spent a couple of hours organizing and packing the Jeep for camping in White Pocket then we tried to go back to Kolob Canyon for another sunset but the road was closed due to ice.

Monday was a day of misadventure. We headed out early on our way to the BLM office in Kanab to get in-person updates on the road conditions to White Pocket. We arrived just as they were conducting the daily Wave lottery. Even in the dead of winter, the parking lot was half full of people hoping to get a chance at the Wave.

The problem is, once you get your permit, you still have to get to the parking lot to meet the trail out to the Wave. That 8-mile road is practically impassable in wet conditions, such as the weather has been for the last week.

We know because to get to White Pocket you have to drive past that parking lot and continue another 25 miles on BLM roads. We made it three miles past the parking lot and had to give up and turn back. Even in a high clearance 4×4 with fairly large tires we were fishtailing in the mud every few feet.

We were really bummed but safety comes first. It looks like with the current forecast we will not be able to get there this trip. 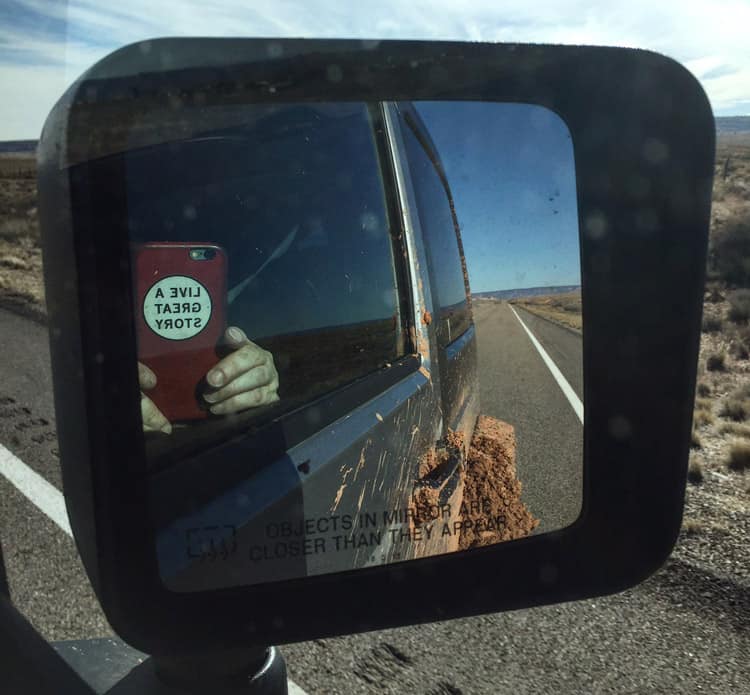 We live to adventures another day! The Jeep was full of mud!

Instead, we continued onto Page where Mr. Misadventures washed off the glue-like mud and then we visited the famous Horseshoe Bend.

The view is impressive but dangerous because even off-season it was full of knuckleheads trying selfies too close to the edge. I don’t like to be around careless people, it’s not worth the risk to my own safety. Sunset is probably a nightmare, I would guess if the inclination of the sun is right, sunrise would be safer as there would be far fewer people if any at all. 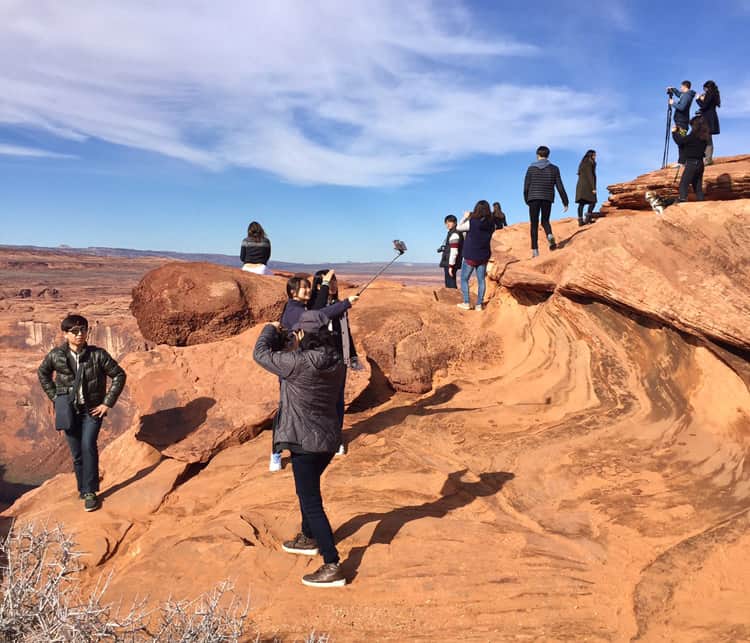 We continued on Highway 89 and found some really funky rock homes and rock “structures” at a tiny town called Cliff Dwellers. We stopped and checked it out before continuing on our way. 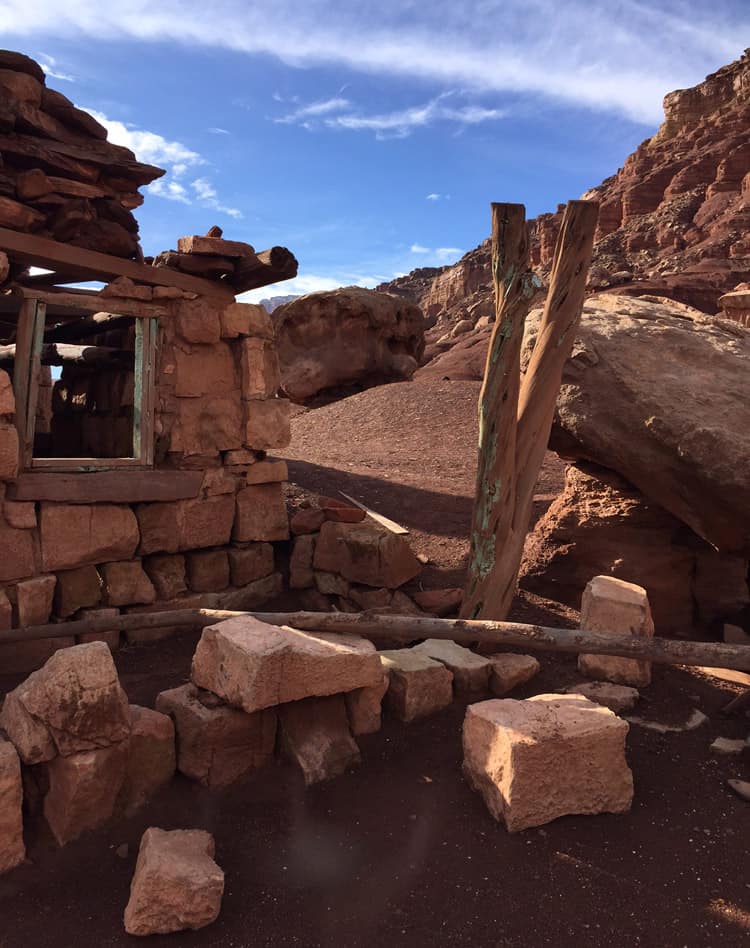 The remains of a rock home near Cliff Dweller.

We eventually got to the entrance of the North Rim of the Grand Canyon which is closed for the winter. There was lots of snow and the area looked like a ghost town. I would love to go back when it opens in spring to check out this side of the National Park. Have you been to the North Rim?

We ended our loopback at Hurricane and made our way to Kolob Canyon for sunset. It was bitterly cold and not the best sunset but the colors in the canyons are amazing!

After that really long day, we rested in the morning and then drove to Zion to see what we could access given the rock situation and then we did the Overlook Trail hike.

The trail is a tiny bit more precarious when it’s wet (and in parts icy) in the winter. We had done it in May in 2012 (that was exciting!) under very different conditions.

At the end of the trail just before the overlook was a small family of Big Horn sheep having a rest on a shelf. I sat in the rocks across from them checking them out awhile while Mr. Misadventures tried to get closer. He hadn’t planned on wildlife so he had the wrong lens. But he did get this. 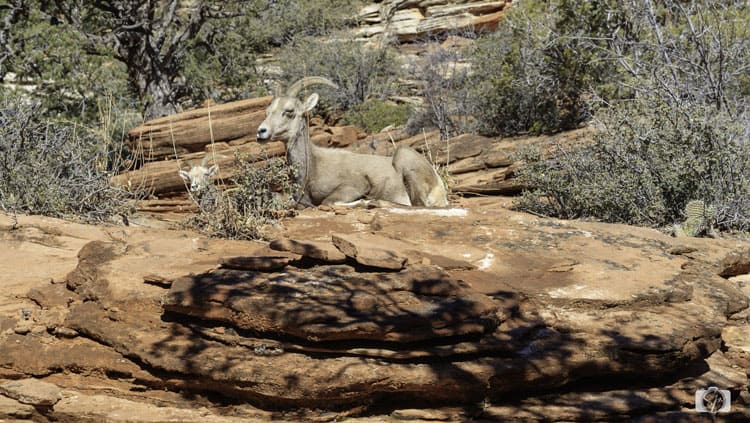 When we left I tried to climb up the shelf to get a closer view but to no avail, although the hubby did capture it on film! 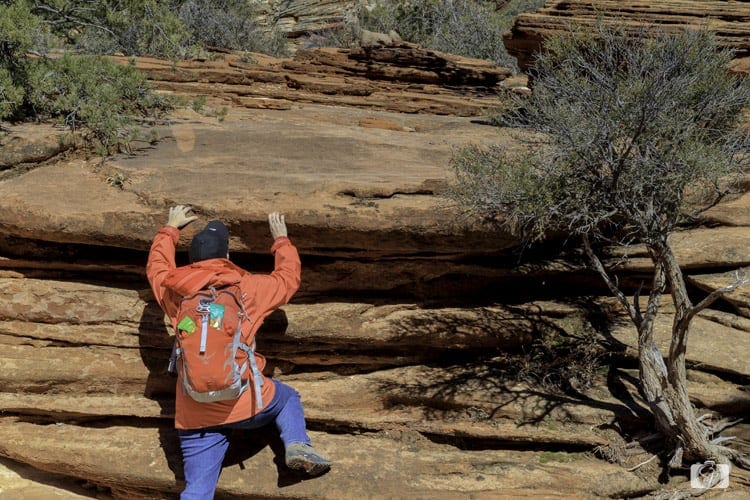 Trying to get a look!

I know this looks like I staged the Sahale Snacks, but I swear I didn’t! I was hot coming back down the trail and had my vest and coat underlayers in my backpack, so my pocket contents popped out! Take a look top center and look hard at the bighorn sheep I was trying to see.

Wednesday we went for sunrise in Zion at the bridge right at the Canyon Drive turn-off. It was freezing, but Mr. Misadventures got a gorgeous shot (coming soon). Afterward, we drove through the Mt. Carmel tunnel through to Highway 89, very close to where we stayed when we visited Bryce Canyon. Then through the Dixie Forest to Cedar City and back to Hurricane. There was a ton of fresh snow on the ground as we traversed the forest, it was breathtaking.

In the evening, we went back to Zion for sunset but were clouded out, although I did get this shot behind the museum. 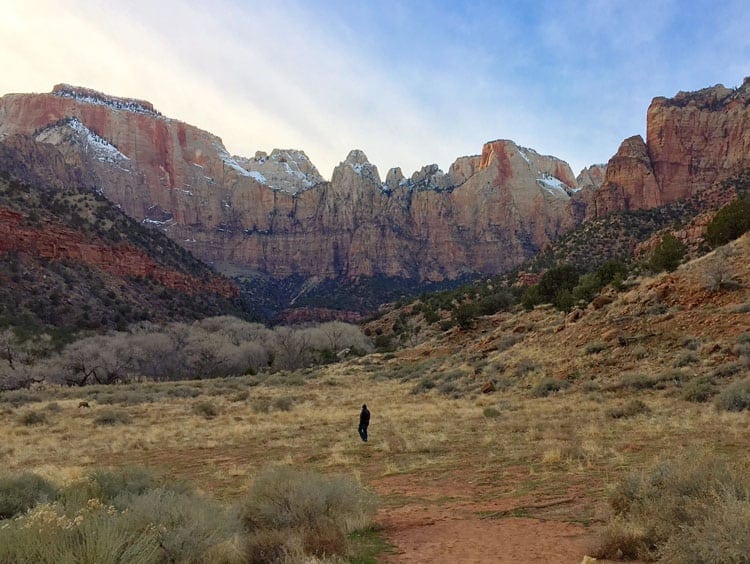 The landscape behind the museum in Zion National Park.

You can’t help but feel small when standing in front of these giants. I felt the same standing at the bottom of the monoliths in Cathedral Valley in Capitol Reef. It’s humbling.

On Thursday the rain came. The forecast is for rain every day until we leave (yuck!). That also means snow in the higher elevations, so it isn’t likely we can get back to Kolob Canyon.

We are searching for places to visit that aren’t getting inundated with water and are close (1-3 hours) from where we are. In fact, today we are heading to Antelope Canyon in Page to redo the photographer’s tour there. We did it in 2012 and I hope that we will have enough sunlight to get decent photos.

I’ll tell you about it next week!

Wow those rocks on the road D: never seen anything like that here.