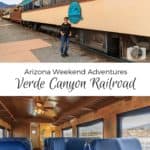 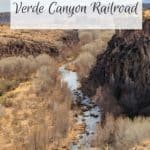 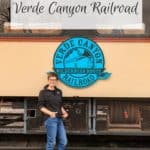 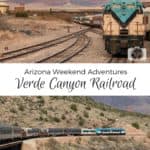 You know I couldn’t resist.

As we continue explorations of our new home state we are finding that there is a lot to discover. There is rich ancient peoples history, native American history, mining history, and railroad history. Throw in cowboys, pioneers national parks and you’ve got the makings for a lot of interesting weekends!

While Mr. Misadventures was doing research for some photo scouting he stumbled upon the Verde Canyon Railroad. During the same week, I read a tiny blurb in a regional magazine about the regional train being one of the best in the country. It was kismet and we planned a day trip (here are over 60 more day trips from Phoenix).

You board the train in Clarkdale, a few minutes past the Jerome turnoff on 89A. From our house in the Phoenix area, it is an hour and 45-minute drive. The train operates year-round, usually with one 4-hour trip a day leaving at 1:00 pm. However, there are special events, special trips, and even some days when the train leaves at 12 noon, so it’s best to check the schedule. They do sell out nearly every day, so it is also best to plan ahead and book your tickets ahead of time.

Given that Mr. Misadventures and I are morning peeps, we decided to take the morning and explore the local area before the afternoon departure.

Given we have a national park pass, we headed to Tuzigoot National Monument, just 5 minutes down the road. This national monument, like Wupatki near Flagstaff, are preserved remains of 12th century Sinagua Indians dwellings right next to the Verde River. Between 1100 and 1425 AD, the Verde Valley was occupied the Sinagua. They built pueblos up and down the river, traded with each other, and banded together in defense for 300 years. Then they disappeared. And nobody knows why.

We walked the short trail from the visitor center to the 3-story dwelling which had great views of the valley. I spoke with a volunteer ranger for a bit who shared a little bit of the Sinagua history and other spots in Verde Valley that you can see ruins. The best time to visit is in the fall when the foliage is turning, it is very brief, but according to the ranger, exceptionally beautiful. I think it is pretty interesting any time of year, but we will be back in the autumn to check it out.

Mr. Misadventures was frustrated that he couldn’t get far enough distance to get all the ruins in the frame. We spoke with the rangers who didn’t have a clue how to access the hills surrounding the park, so we took off on the hunt to gain elevation to access the site at a better angle. After driving around a bit and striking out, we headed back to the train depot to eat lunch prior to the trip getting underway. (More on Tuzigoot in a bit!)

They do sell snacks and drinks on the train, and even ice cream on the return trip. But given our low-carb lifestyle, we packed our own lunch and picnicked at the depot. The depot has nice outdoor tables, a store, a museum, a full restaurant, and a snack bar.

We purchased a coach class ticket (there are first class, caboose, and locomotive ride-along tickets as well). When you pick up your tickets you are assigned to a railway car (ours was the Tucson, which is cool, because we love Tucson). We boarded our car and were introduced to our docents for our trip. We did a little safety talk and were then let loose.

The interior of the train cars are well maintained and the seats are comfortable. The trains began running in 1912 as a means to link the copper smelter at Clarkdale with the copper mines in Jerome. Jerome is another fun place to visit in the hills above Clarksdale (and a great spot for activities with teens). It is a historic mine that has been well preserved for the sake of tourism and is quite popular to visit. You can see it in the hills here:

The Santa Fe Railway owned the tracks and trains until 1988 when it was bought by a private citizen David L. Durbano who re-opened the line between Clarkdale at milepost 38 and Perkinsville at milepost 18. So the route is 40 miles round trip. It takes 2 hours to get to Perkinsville, the FP7 locomotive car is turned around and the train returns to Clarkdale, the entire route through the Verde Valley.

The area that the train traverses is practically untouched and absolutely gorgeous. The only way to access the area is by train or by foot. On the train, you get to see it all. Every train car has its own outdoor car attached. It’s really great because there is plenty of room for everyone and you don’t have to fight for space.

Mr. Misadventures had enough room to use his big lens amongst everyone using their own cameras and cell phones. During our trip, we saw eagles and hawks as well as javelinas. Late winter/early spring is the perfect time to go because the vegetation is just starting to bloom and you can see the wide expanse of trees along the river without your view being obstructed. Late spring, summer, and even into the fall the foliage covers the river – that is not to say that fall foliage is not gorgeous, I’ve seen the photos to prove it, but it is just different. If you are local, it behooves you to go more than once! Also, the route covers more than just the river, your views of rock formations and other parts of the canyon will still be awesome.

I’m not sure I would love to be in the outdoor car in the height of summer, but the indoor cars are air-conditioned, so if you aren’t interested in photography, the summer is still a good time to ride.

One this I can say for sure is that the docents are fabulous! We had Michael and he was so knowledgeable about the history of the area. We pummeled him with questions about things to visit, his recommendations, and his native American drumming. He plays every week in Sedona at Oak Creek Brewery and we hope to check it out. Speaking of ales, the Verde Canyon train goes all out in the fall with Ales on Rails. On Thursdays, Fridays, Saturdays, and Sundays in late September and October, they have an ale tasting and optional lunch that takes place at the depot. You can try local ales and craft beers from Arizona right before hopping the train – fun!

When we got to Perkinsville it took a few minutes to reverse the locomotive car. And this is where I think there is a missed opportunity. It looks like there used to be a station here. There are abandoned buildings as evidence. Why not rebuild the station and have a 30-45 minute break for people to visit the station, have a coffee, beer, or ice cream, learn a little history buy a t-shirt, and then get back on board? That’s what I would do.

But alas, no one asked me. The return trip is nice because as we approach Clarkdale we are reaching the golden hour for photos. Mr. Misadventures and I just sat back and enjoyed the nice, breezy ride and vibrant scenery. The canyon is called the little Grand Canyon because the red rock sandstone formations look very much like the bigger more famous version. There are caves, and tunnels, and bridges, and lots and lots of beautiful red rocks to see.

We really enjoyed this train trip and plan to take it during every season so we can enjoy the differences. It is great for families and friends visiting Arizona. It’s clean, well-run, with great docents. A few things to bring: sunscreen, a hat (although you might need to hold onto it from time to time), and PSI bands if you suffer from motion sickness (I forgot mine and regretted it). As I mentioned in the beginning, there are snacks and beverages, but if you want you can bring your own.

Now back to Tuzigoot National Monument for a moment. Mr. Misadventures was not satisfied with the responses that the national park rangers provided, nor the initial scouting that we did, so during the week after a train trip he did more research and the following weekend we headed to Cottonwood (a cute little wine town), also off of 89A to Dead Horse Ranch State Park where at the end of Flycatcher Road you have the PERFECT shot of the monument. Sure would be nice if national and state parks spoke with each other and knew the local area!

And this was the reward:

Now, we just have to wait for that fall foliage (or snowfall) and Mr. Misadventures will have the shot he wants!

To make a day of the Verde Canyon Railroad. Have breakfast in Cottonwood, visit Tuzigoot National Monument, take the train and then return to Cottonwood for wine-tasting and an early dinner, or head up the hill for a meal at Jerome Grand Hotel (stunning views on their outdoor terrace where you can dine).

How about you? Have you ridden the Verde Canyon train? Do you think you’d want to? Have you enjoyed another heritage train ride somewhere else? Do tell!

For a visual summary of this post, check out my Verde Canyon train web story!

This looks like a really lovely day trip! I love to ride trains - I often say they're my favorite form of transport. But I always associate them with the UK or Europe in general. Never the US (mainly due to some strange Amtrak experiences haha). However the Verde Canyon railroad trip looks perfect for a relaxing day.

I love train rides (working on writing about one in the Smoky Mountains right now) and would love to take this little excursion! I wish trains were a normal thing in our country still. I love the scenery you saw (and wildlife!) and can't wait to see photos from the fall and/or winter.

That train ride looks epic! Mr. Misadventure had expertly translated it visually.(or it's the other way around). I like that I feel riding along with you while reading your post... And your further research had indeed produced an amazing reward...That's an awesome pic of the Tuzigoot National Monument.

Love those last panoramic pictures! Taking a train to see all of this would be so much fun. The landscapes in Arizona are unmatched. So much variety! And ruins! I didn't even know those were there. Can't wait to see what it looks like in all seasons...

I have always wanted to kayak down the Verde but never quite made it. The Verde Canyon Railroad was a close second. I was just thinking about Jerome the other day and the haunted hotel there. It's getting to be that time of year.