Mr. Misadventures and I had been strategizing about how we can keep the travel bug at bay while we save money for our trip to Kyoto. We decided we should do that by exploring more of San Francisco. There are so many parts I am still not familiar with and not wanting to take it for granted, I am determined to explore as much as possible. One of the best ways to see the city is on a historic San Francisco cable car.

When I think about my authentic self I categorize myself to be a cautious adventurer. Now those two words may seem like a strange combination, but it works for me. So last weekend I headed to the city by the bay to do something ultra touristy that I had never done before…ride a cable car!

What could be more cautiously adventurous than to hop on a crowded moving car with no real safety features?

San Francisco’s cable cars are iconic signatures of the city. They were invented in 1873 and have traveled up and down San Francisco’s hills ever since. There are three remaining lines: Powell-Hyde, Powell-Mason, and California Street.

I knew from research (that cautious side of me) that there are almost never any lines for boarding the cars at the end of the line at California & Market Streets. I walk around there all the time on my lunch hour and have observed half-full cars. So I drove into the city, parked near my office and boarded a cable car.

It costs $6 one way, so if you plan on going “there and back” or want to switch lines to head to places like Fisherman’s Wharf or Union Square, you better buy an all-day pass (which costs $14). The cars run from very early in the morning until midnight so if you are in the city for the day, you can take multiple cars. [Tip: Pay the guy in the back, the driver in the front is driving!] Given that I wasn’t going in the “busy” direction, the car wasn’t that full and I had the opportunity to observe the city as we rose up the hills. The architecture is remarkable and I loved looking at the intricate details of the roofs.

I love the small details. Like this handle on the cable car. Focusing on small details, being thoughtful in the things I do, has made me a far happier person. Also, when I look at this handle I wonder about the stories of all the people who have grabbed it! 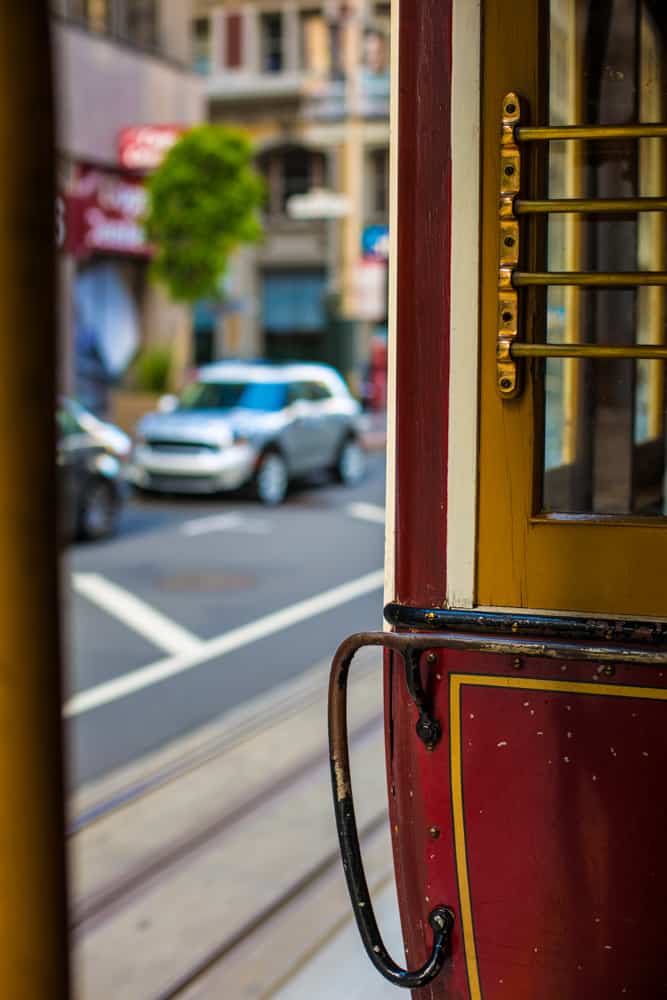 The drivers have stories too. They are a special breed of Muni drivers that get a bad rap sometimes, but dealing with tourists for 16 hours a day, 7 days a week would likely make anyone a little grumpy sometimes. I myself had great drivers who played songs with the cable car bell (they actually have an annual contest every year.) I stopped at the crossroads of California & Powell where the lines intersect, the TransAmerica building was calling to be photographed and I was happy to oblige. Heading back down we paused Chinatown and I captured these tourists taking pictures of the passengers on the car. Tourists capturing tourists! I love Chinatown, especially all the red! When I had exhausted my cable car thirst I headed to a drug store near my office to grab a bottle of water. I walk on this street quite often, but only noticed these “buildings” for the first time. It’s funny how playing tourist had opened up my eyes to see something I had not seen before. I grabbed a water. Next to the refrigerated cases were the freezer ones where many varieties of ice cream were on display. It wasn’t a particularly warm day in the city (as you will see in a bit) but as I planned to do some sunset photos and I knew I would not be eating dinner for several more hours, so I decided to give myself a sugar boost.

Sugar-rush installed I headed to Pier 7 for some sunrise photography. The pier is a great spot to see the city in the backdrop or to capture the recently-added lights on the Bay Bridge. I am not the most patient photographer so I concentrated on the people strolling on the bridge. Again, like the cable car handle, and like I often do at places like airports, I try to imagine their stories.

It was getting pretty cold. But as I work in the city I knew how fickle she can be, particularly in July, so I had on a long-sleeve shirt, a sweater a scarf and a jacket! Still, I kept myself busy by playing around with the Canon Powershot that Skinny Cow provided me (being a Canon girl I was pleased!) : As well as with my iPhone. I tried to take pictures from a different perspective, like this one: Ultimately, my favorite shot of the day was of this couple at sunset walking towards the city. I felt transported. It was like watching a beautiful scene from a movie.

But it wasn’t. It was real life. It was San Francisco. And playing a tourist for the day had brought me this gift. A reminder of how important the small things are. My authentic self? Well when it comes down to it, it is about recognizing the small things in life, appreciating them for what they are and embracing what that brings.

TIP: If you are down by the Embarcadero, buy your tickets at the Walgreens across the street from the Hyatt Regency San Francisco on Drumm Street.

How about you? Have you been a tourist in your own town? Have you taken your girlfriends out on the town and discovered something you have never seen before. Do tell!