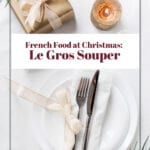 I know that I write a lot about Paris, but France is more than Paris (a series I actually used to have!) and I thought for this holiday season I would share a Christmas tradition from the south of France. A Christmas in Provence is never complete without le gros souper, a holiday tradition whose name translates to “the big supper.” This meal is steeped in tradition. The recipes used have been passed down from generation to generation since the Middle Ages.

Whether you’re a Francophile (who might one day) travel to Provence during the holiday season and want to know what to expect, or you’re staying put but want to bring this French tradition into your own home, I’m here to help! Read on to discover the ins and outs of this delicious Provencal celebration held on Christmas Eve.

It’s a très cool tradition and can’t wait to share it with you!

The Story of Saint Barbara

To get the background in this meal’s importance we need to Start with Barbara. Saint Barbara that is. Preparation for le gros souper begins on December 4th, the feast day of Saint Barbara. (Every day in France has a saint, a tradition that was carried over from its Catholic origins. Despite now having a rigorously enforced separation f church and state, the tradition of celebrating a saint’s day still lives on for many.)

Saint Barbara is said to have lived in a town in what is now Lebanon back in the third century. Her father was a pagan who kept her locked in a tower to protect her from any harm that might befall her, including the attention of suitors who wanted her hand in marriage.

According to legend, Barbara escaped her tower and went to get baptized as a Christian. Her father was so angry that he chased after her with a sword. Then, he took her to the provincial prefect (like a regional governor), who sentenced her to be tortured and then beheaded. Barbara escaped and was hiding in the countryside, but a shepherd saw her and alerted the authorities. As punishment, God is said to have turned the shepherd’s flock into grasshoppers. Unfortunately, Barbara did not escape a third time. Her own father performed her execution. God punished him by striking him down with lightning and reducing his body to ashes.

Despite the darkness of this story of martyrdom, the tradition associated with Saint Barbara’s feast day is quite beautiful. In her honor, the people of Provence plant wheat (or sometimes lentils) into three containers that symbolize the Holy Trinity. These containers are called the wheat of hope (le blé de l’espérance or le blé de la Sainte Barbe).

They say that if the wheat prospers, so will they in the coming year. The expression goes:

As I mentioned above, the wheat is divided into three bowls, which are decorated with red and yellow ribbons. These are placed on the table as decorations for le gros souper. On December 26th, the bowls of germinated wheat will be moved to a place of honor beside the nativity scene. They’ll stay there until the Epiphany (January 6) when they are planted.

There are many other important aspects of setting the table for le gros souper, too. The table is traditionally covered with three white tablecloths. They’re layered on top of each other and represent the Holy Trinity of the Father, the Son, and the Holy Spirit.  The table also features three candles. These represent the past, present, and future.

Lots of symbolism, am I right?

It’s also a tradition to set an extra spot at the table for an unexpected guest or someone in need from your community. Many decades ago it was traditional to invite homeless people or vets to fill that spot. (One of my favorite Maigret [French detective] episodes is called Mr. Monday. It features a murder (well don’t they all) at a doctor’s home/office in which one of the suspects is a local homeless vet who visits the on Mondays for his weekly free meal.)

Next let’s take a look at my (okay, everyone’s) favorite part of a traditional dinner: the food! And, trust me, when it comes to le gros souper, there’s a lot of it! The meal is traditionally eaten before midnight mass on Christmas Eve. Take note, though. Midnight mass isn’t always at midnight anymore. Many churches in Provence hold it earlier in the evening these days.

The main meal consists of seven “light” courses. In this case, “light” just means meatless. Seafood is okay. They represent the seven sorrows of the Virgin Mary. Long ago, this meal wasn’t even allowed to contain animal fat like butter. That’s not hard to do in South France where olive oil is the fat of choice as opposed to the North of France where butter is king. Olive oil plays a big role in many of the dishes, even though the “rule” about animal fat has loosened up a little in modern celebrations.

Throughout the region of Provence, and even from family to family within the same village, the exact contents of the seven main courses will vary. However, there are generally some common threads. The South of France also means warmer weather than the rest of the country so there are more fruits and vegetables available in the winter in Provence than any other part of the country. As a result, Provencal Christmas dishes have more fruits and vegetables while the traditional Christmas dishes in other parts of France utilize more bread and fats.

There may be a vegetable soup on the table and some escargots (yes, snails, but they’re much more delicious than you’d expect). Some dishes will also likely feature anchoiade, a local anchovy paste often spread on celery (I like it on bread!). And traditionally, all these foods are spread out across the table buffet-style (or family-style) rather than being served one by one.

The wine is an important part of the meal. It is France, after all.  Traditionally, vin cuit is served.  This is a regional dessert wine from Provence. Vin cuit translates to “cooked wine.” Vin cuit is prepared a little differently from typical wines, and it is very sweet. Before a vin cuit is aged, it is simmered in a cauldron for several days. The simmering (just before it boils) creates a grape juice that concentrated and syrupy. Then, it goes into oak barrels for several years before it is served. It is absolutely delectable!

If the sweetness of vin cuit isn’t up your alley, not to worry! Usually, there will be seven other wines served, including white, red, and rosé. There’s really something for everyone’s tastes.

Thirteen desserts will be served at le gros souper in honor of Jesus and his twelve disciples. That’s right – more religious symbolism. (I am not religious myself, but I appreciate the historical reference as to why things are a certain way or a certain amount.) Thirteen is considered just a minimum, and many families choose to serve even more than thirteen desserts. Christmas Eve is certainly a happy day for everyone in Provence with a sweet tooth, maybe not so great for us low-carbers!

Ah, but when in Rome, or in this case, Provence!

The desserts are not eaten until after the midnight mass. They’ll also be left on the table until December 27th, so the family can continue to snack on the sweets over the course of the next three days. One of the most popular desserts is nougat, made with honey and almonds. There’s black nougat, which is hard, and white nougat, which is soft, but they have similar flavors. Personally, I love nougat and I often buy it when I am visiting anywhere in France.

And of course, no French Christmas celebration would be complete without a Bûche De Noël (yule log). These are beautifully decorated to look like a branch of a tree (for the folks that like traditional ones, although in Paris I like how whimsical they have become, last time I was n Paris for the holidays my favorite were little pigs!). They contain rolled up sponge cake and buttercream.

There are lots of traditions and superstitions surrounding le gros souper. It is said that the things you do during this meal will impact your fortune in the year to come.

For one thing, if you’re eating fougasse à l’huile d’olive, you must not cut it with a knife. Rather, it should be torn apart with the fingers. This is supposed to mirror the breaking of the bread at the Last Supper. It is said that using a knife could bring tidings of bankruptcy upon your family.  It is also important that everyone who attends the dinner must at least taste every single one of the thirteen desserts. If they leave one out, they might bring bad fortune.

Children must say the name of each dessert before they dig in. It’s a challenge for the shy ones and the hungry ones, but it’s another way of warding off bad luck. The table is also left set overnight after everyone goes to bed. This is so that the souls of the dead can come and have their own gros souper.

A Merry (+ Full) Christmas in the South of France

With all the wine, sweets, and other delicacies, it’s easy to see how the tradition of le gros souper has withstood the test of time. Whether you are celebrating at home or traveling to Provence to enjoy this meal in its place of origin, I know you will enjoy it. You may need a gros sieste afterward, but hey c’est la vie!

I’ll leave you with one last tradition for good luck. If you take your used white tablecloth outside to brush off the crumbs from your feast (traditionally in your fields, but the yard or balcony will do the trick) the crumbs will act as seeds of luck, growing for you in the new year.

How about you? Have you ever experienced le gros souper in Provence? Have you made your own gros souper meal? Are you interested in trying this traditional French holiday meal for yourself? Do tell! 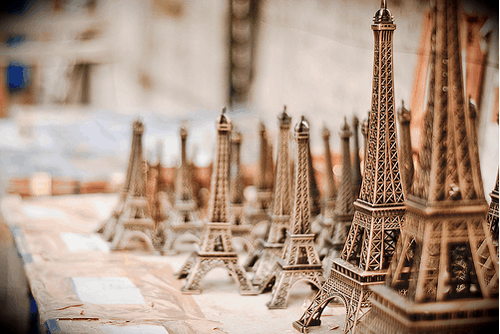 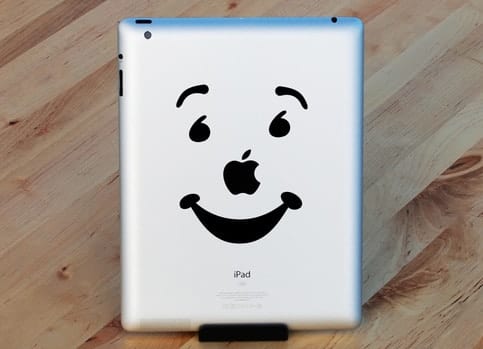 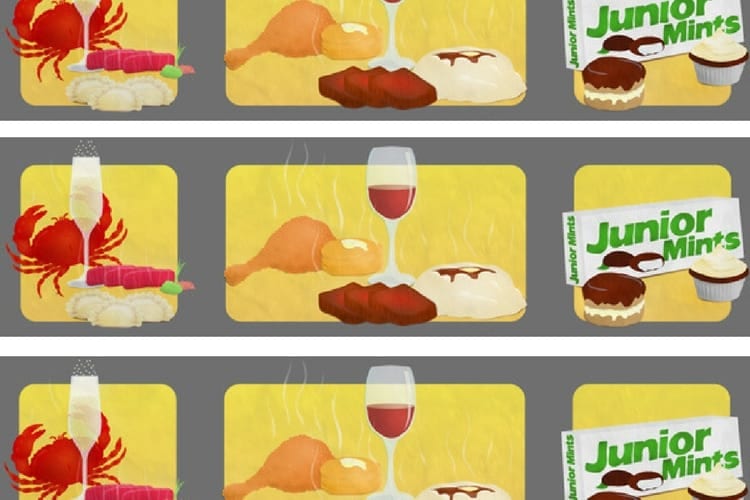 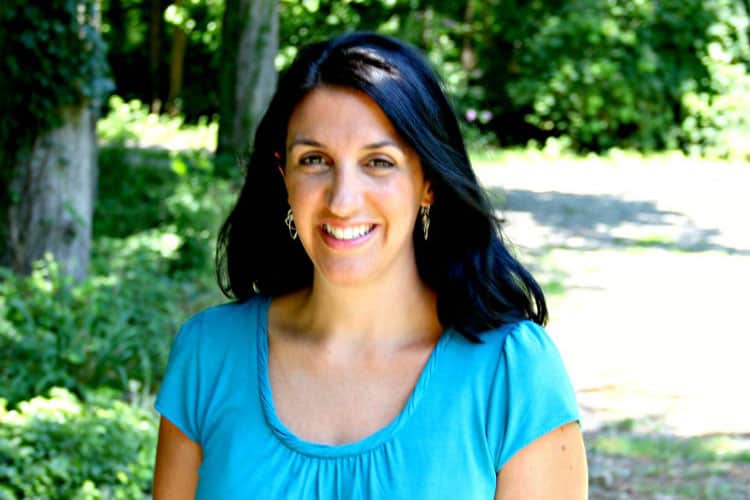 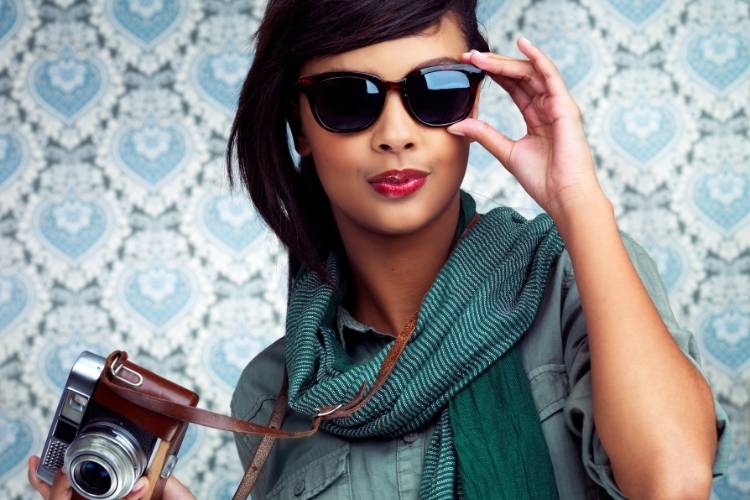