We’ve been wanting to go to the North Rim of the Grand Canyon. We planned a trip for Labor Day Weekend and it was the perfect opportunity to try out the GMC Denali Canyon and I thank my friends from GMC for loaning me one. 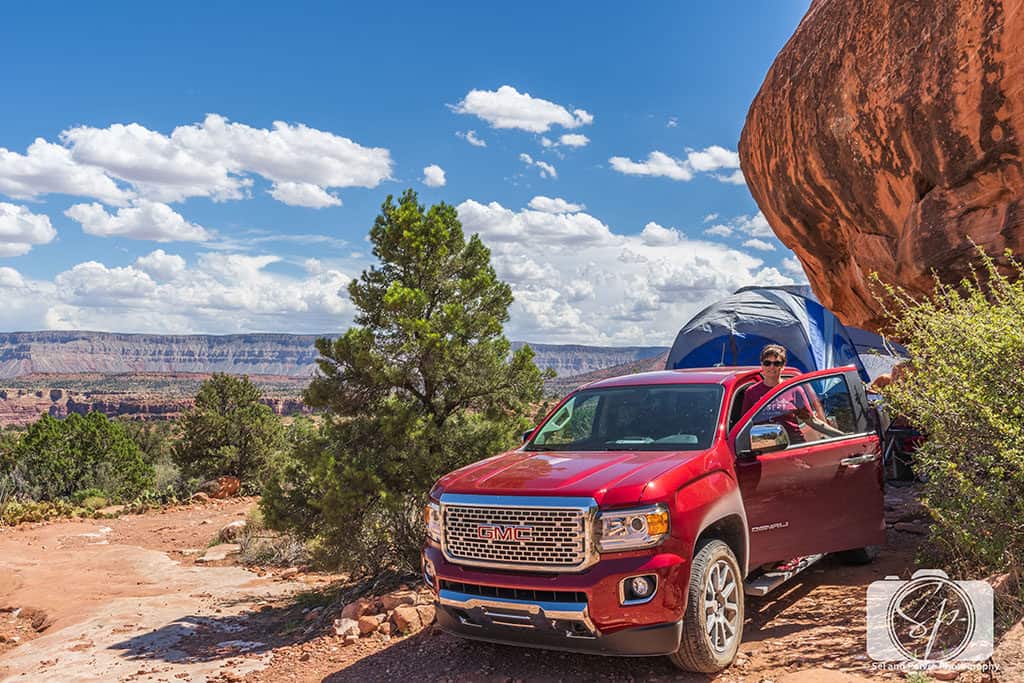 We’ve been trying to figure out what kind of car to get. We love our Jeep for its simplicity and ruggedness, but quite frankly it is pretty darn uncomfortable! We need something that can handle our outdoor adventures, carry our equipment (including A LOT of camera stuff) and is comfortable to drive more than 2 hours!

We always thought that meant an SUV, and never thought that might mean a truck. Mainly because neither one of us have a lot of truck experience. My first boyfriend in college had one (after his old station wagon finally died!) and it was a monster to get into, had bench seats which was NOT comfortable with me at 5 feet tall and my boyfriend at 6’1! And for Mr. Misadventures trucks just aren’t a thing in France, not even for farmers, they use something like a mini transit van. When he first moved to the US, he was super excited to get an SUV which wasn’t that prevalent either, although they are more so now. All that to say we aren’t truck people.

But we are now! 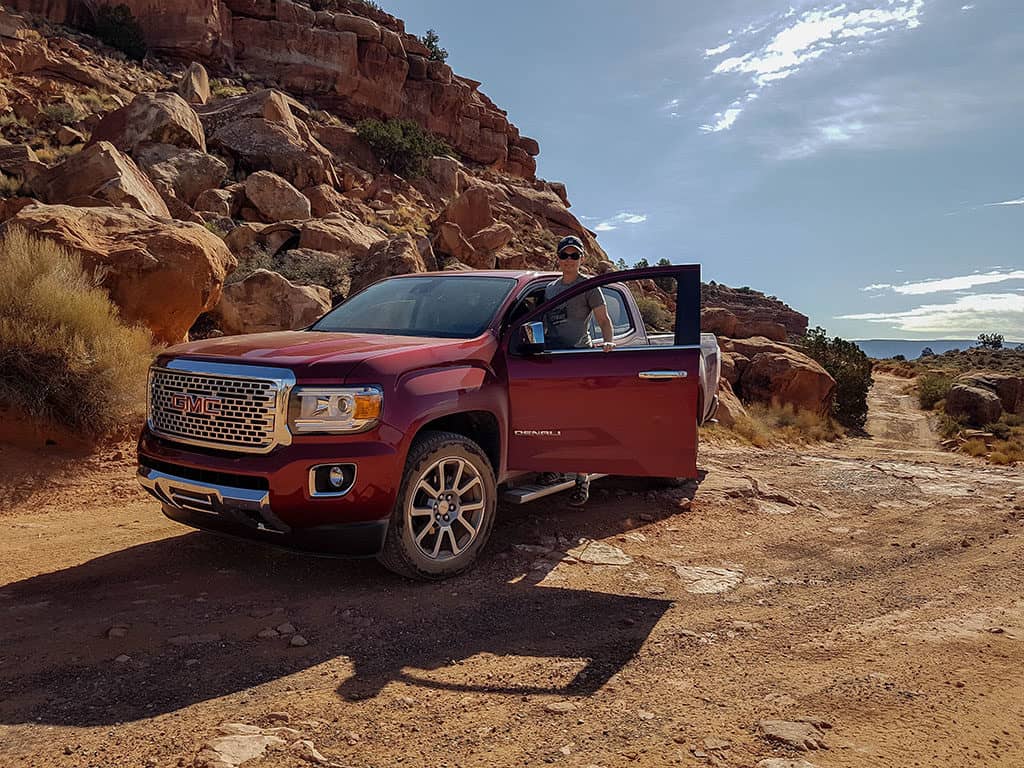 On to the weekend adventures!

We left on Friday. I had to work on so we couldn’t leave until late afternoon, but we were blessed with a very straightforward drive given the holiday weekend. We had some slowdown on 17 to Flagstaff but once we hit highway 89A we were practically the only ones on the road which I thought was strange. We didn’t want to be driving on an unfamiliar dirt road and setting up a tent at night so on our first night, we stayed in Kanab, a town we’ve spent a lot of time in.

The next morning we got up gently, or in our world, at 7:30 and after grabbing breakfast made our way to the entrance to Antelope Valley Road on the Kaibab Indian Reservation, also known as CR-109. It is 61 miles on this dirt road to Toroweap Overlook. 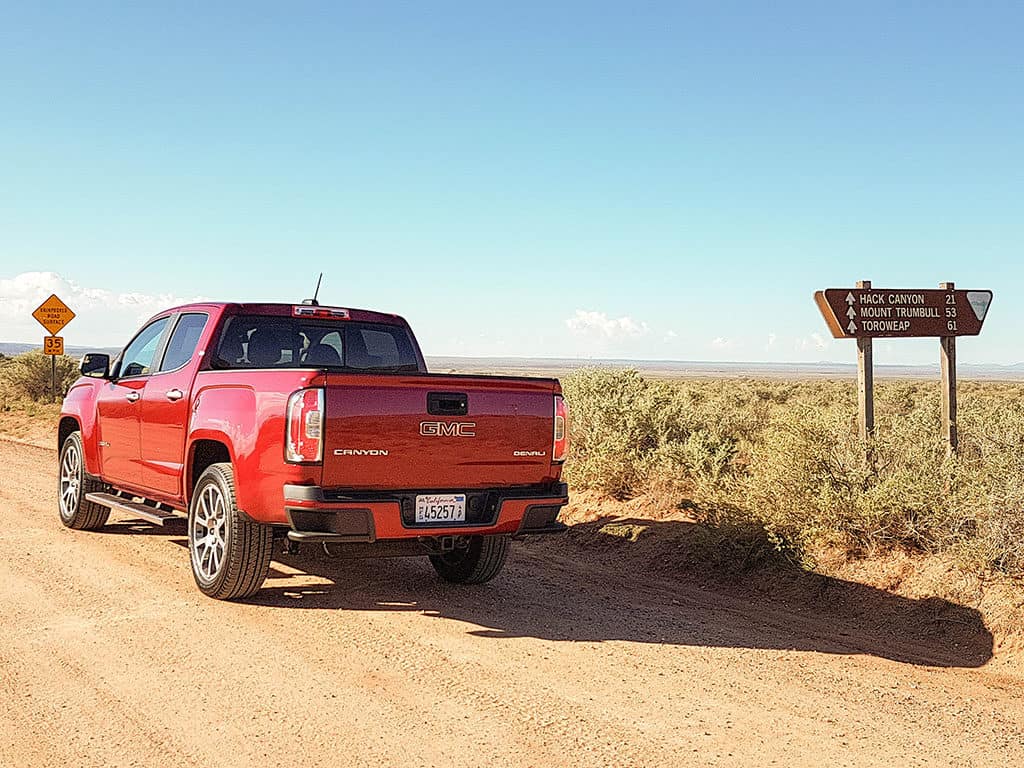 We found that for 90% of the drive it wasn’t necessary to have a high clearance vehicle, just a car or truck with 4×4, although we never used 4×4 on the truck. Although word of caution, your experience will all depend on the season and weather. We tried to traverse a similar road in January 2017 in this area and had to turn back, a spot we had successfully used in February of 2013, so it all depends!

The whole time we were on this road we kept saying, “you don’t need a high clearance vehicle, they are just trying to keep people out or scare them away.” I can see you doing the same, “Andi’s crazy. You don’t need an HCV for this road!” 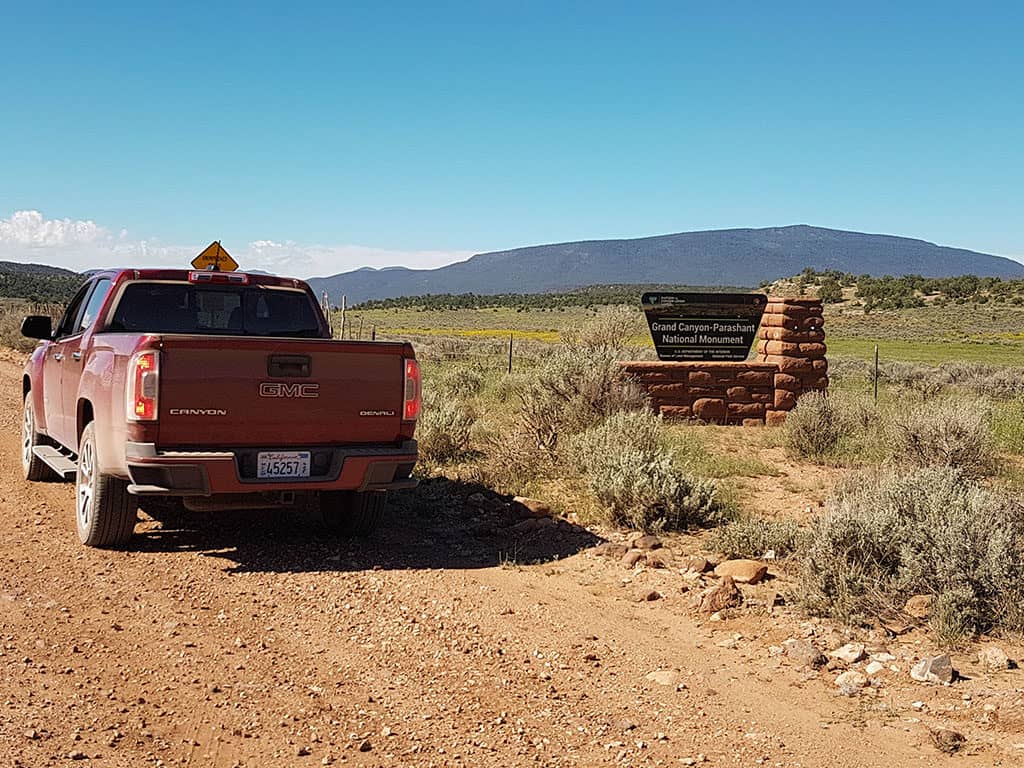 However, once you reach beyond the ranger station the road gets rougher. The last 3 miles you 100% must have and do need a high clearance vehicle. The Denali Canyon had no issues (although I was a little nervous about the spare tire underneath the truck, but it was fine). Also if you drive from the campground to the overlook (which we didn’t) the last 1/2 mile is especially gnarly.

Instead of feeling exhausted like I would in our Jeep the ride was so smooth I actually arrived refreshed and ready for the next part of our day.

There are 10 spots at the Toroweap campground. You need an advanced permit to camp. Spots 1 and 2 are the best because they look right out onto the Grand Canyon. We were in spot 8 which had great views, lots of shade and we didn’t have any neighbors. Only because the people in spot 9 didn’t arrive until late in the evening and spot 10 (which is for a group) was empty. On a holiday weekend! I know, kinda of crazy, but we’ve been having that kind of luck this year, like when we spent the weekend in Tucson for Memorial Day. 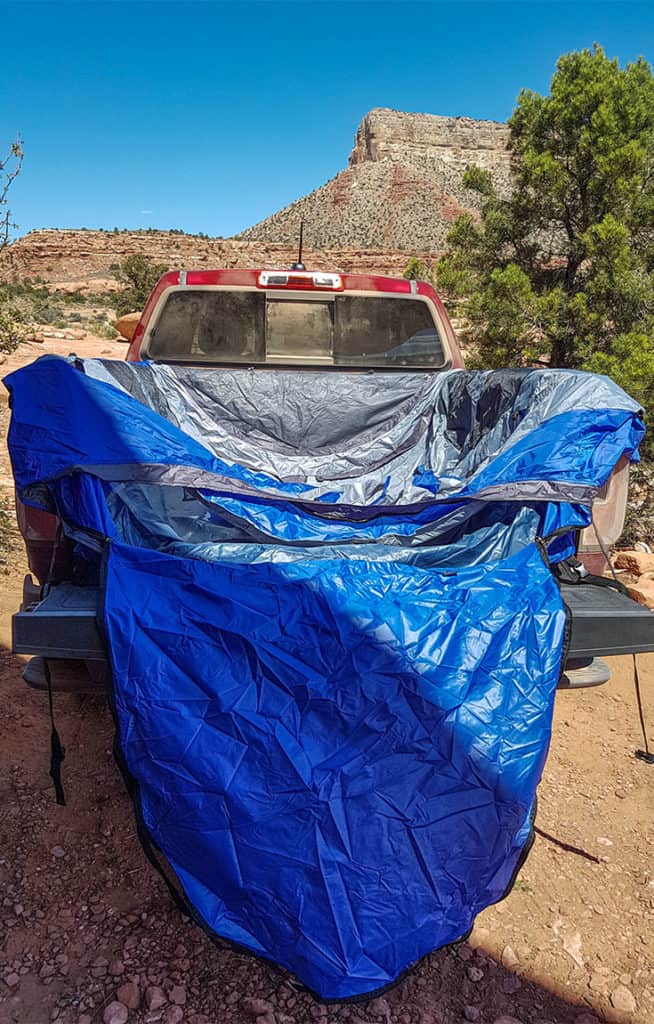 We immediately tackled the tent. I don’t think it matters what kind of tent it is, the first time putting up any tent takes time and patience. It took us an hour, it wasn’t easy but we got it done. 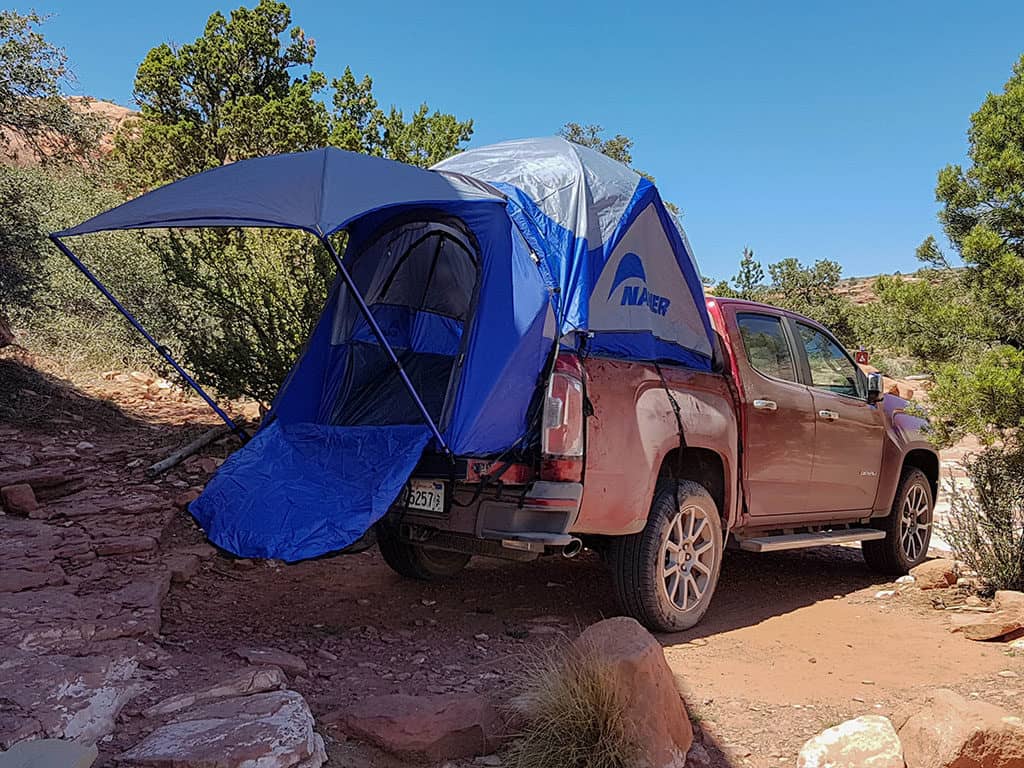 The folks at GMC lent us a camping kit with equipment meant to work with the truck. The tent was from Napier Outdoors. We’ve been wanting to try a vehicle camping tent for the Jeep so we were excited to have the opportunity to do it with the Canyon Denali. 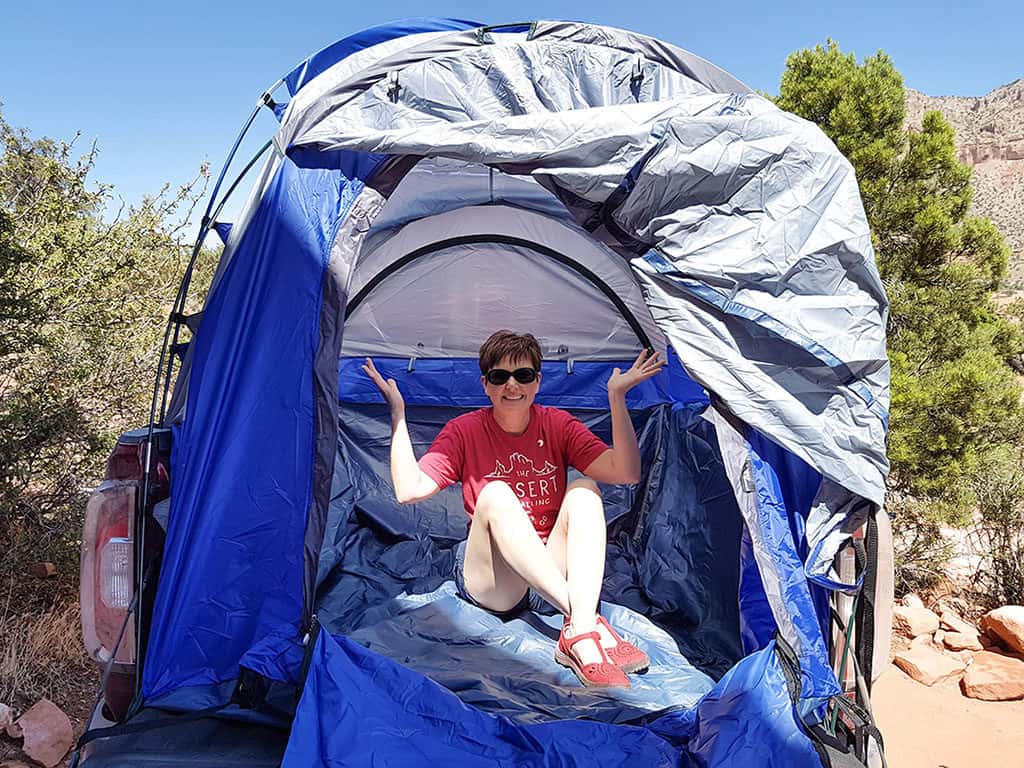 It took us an hour, it wasn’t easy but we got it done. 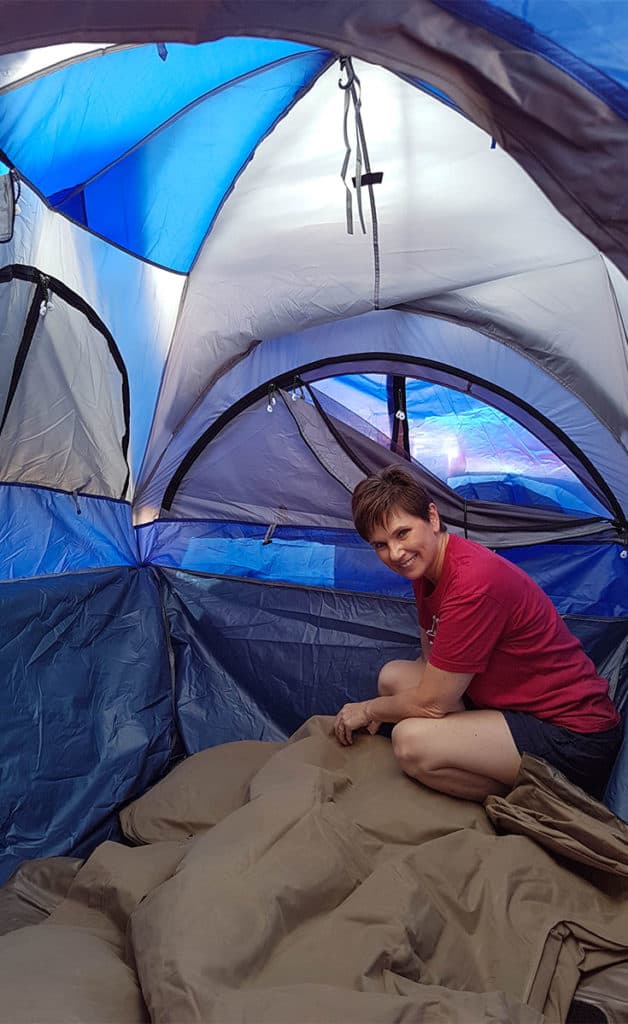 The air mattress was a breeze. 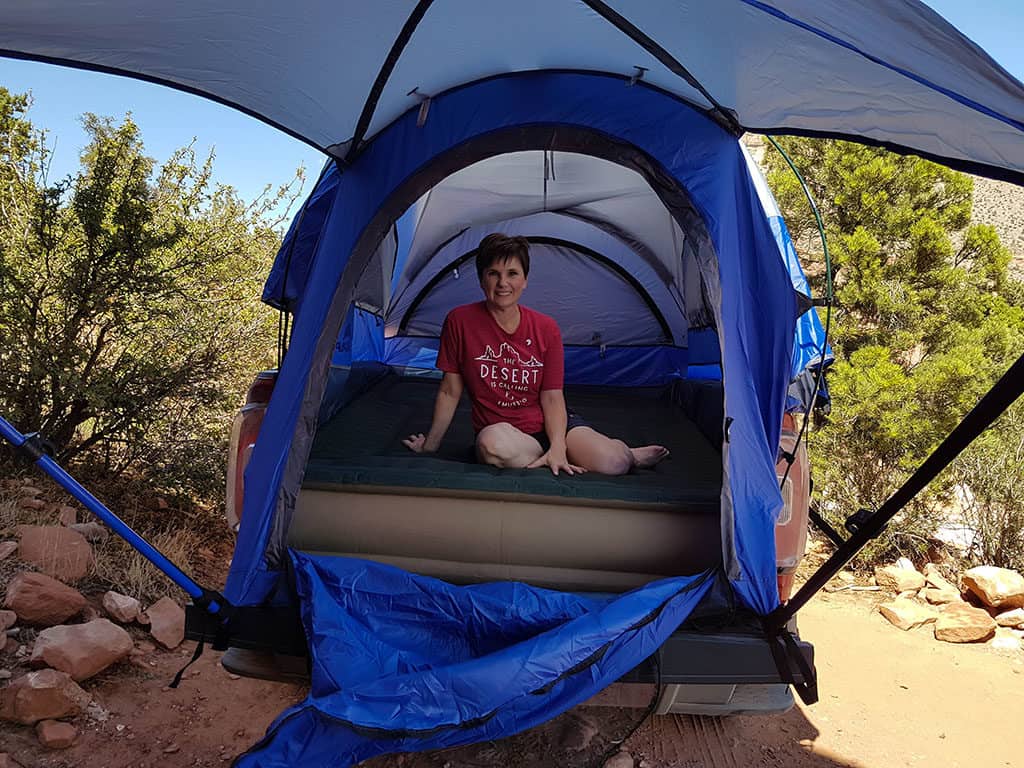 One note on the tent. I’m 5 feet tall and the truck bed hits me at chest level so it wasn’t easy for me to jump up and into the tent, we needed a step ladder which I have plenty of at home so next time I’d throw that into our room camping gear. Jumping out was no problem. 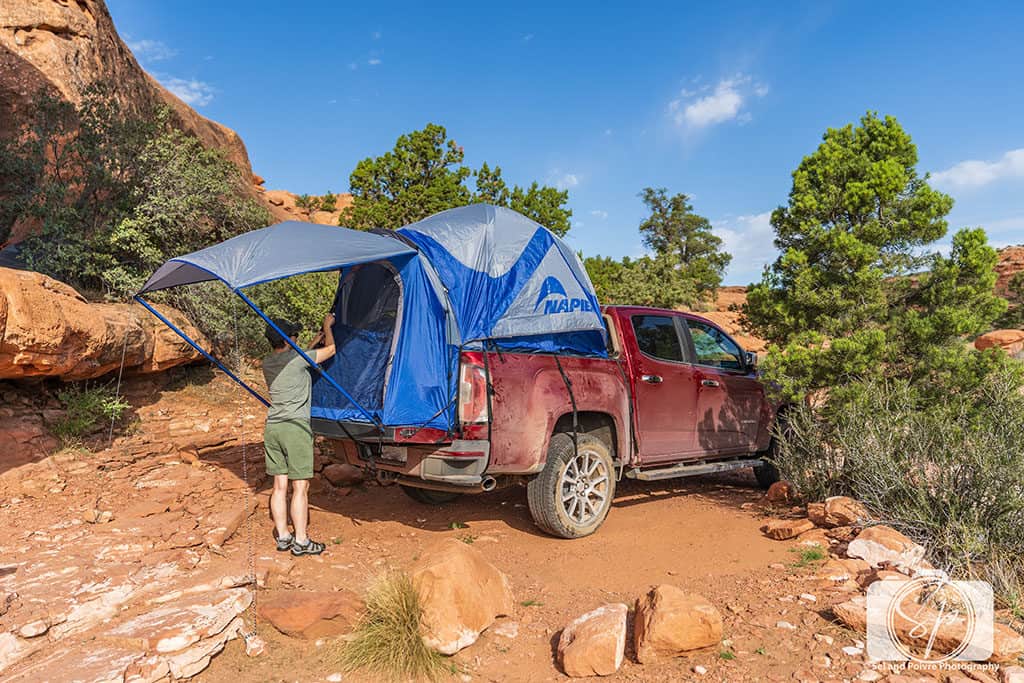 We ate lunch at around 1:00 and took a few photos and spent the rest of the afternoon relaxing in camp chairs waiting for sunset hour.

It was nice. No cell service just the gorgeous landscape to keep us company. It was a comfortable 80 degrees, words I would never have imagined putting together in a sentence (it was 107 when we left on Friday). 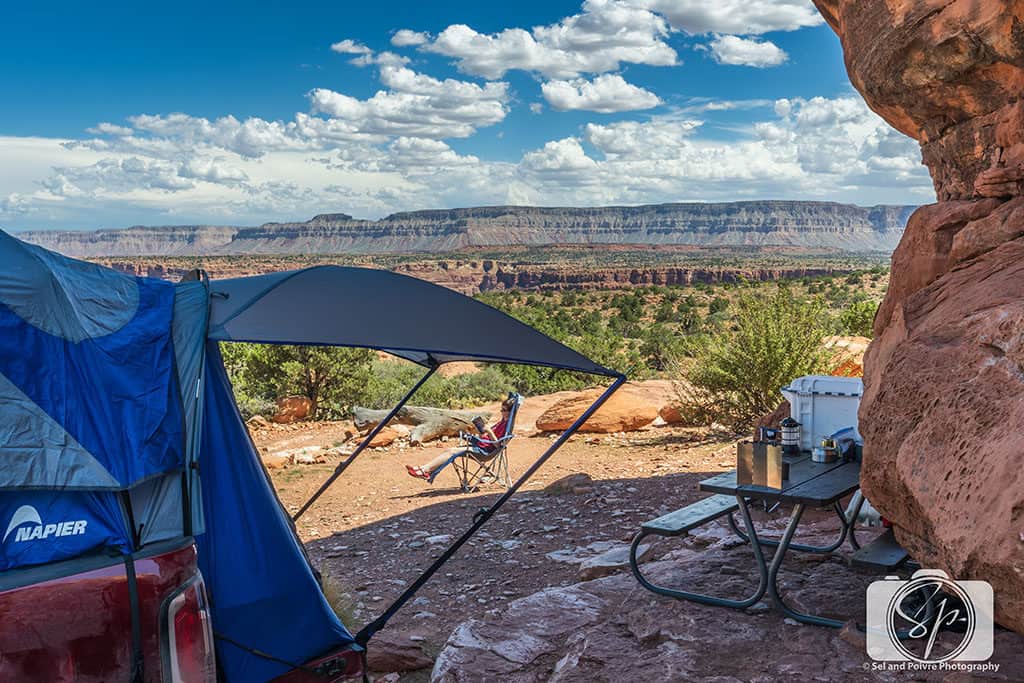 This was our other view. 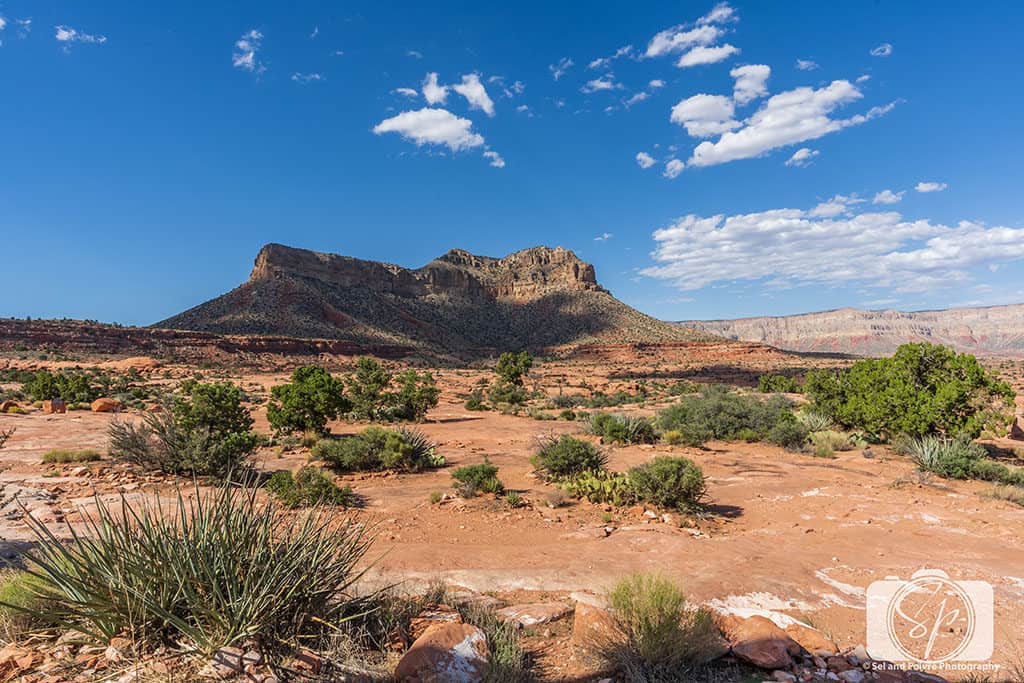 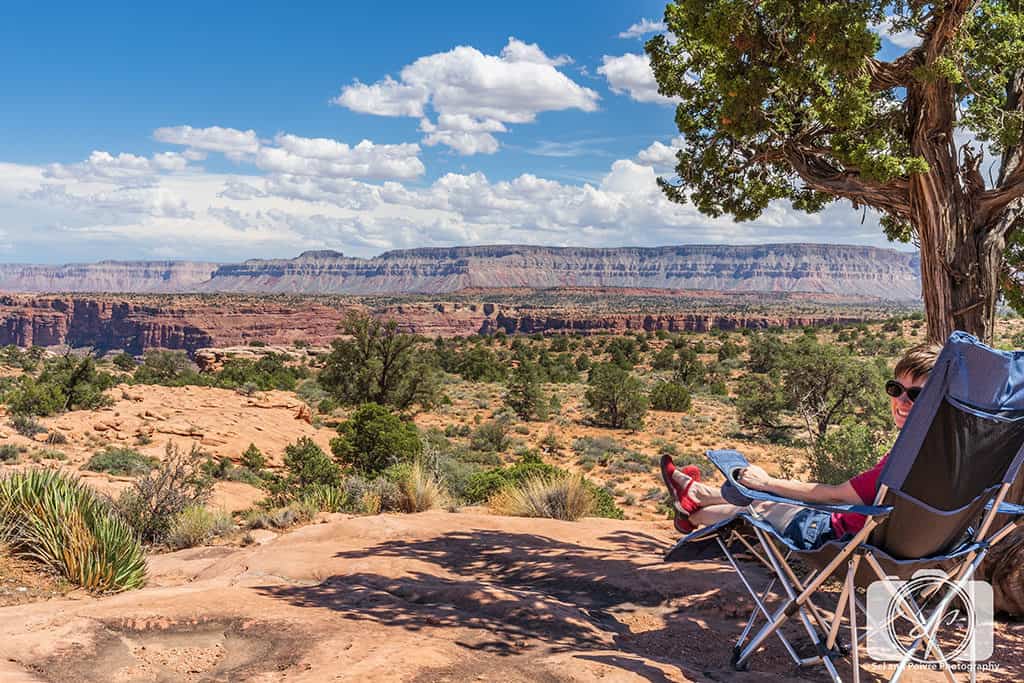 Can’t beat it right? (P.S. don’t you love my shoes? I’m head over heels with them! They’re from Jambu & Co. their line is all about outdoor shoes that are comfortable and stylish and I think these are adorable!)

Two hours before sunset we hiked out of the campground and over to the overlook to scout for a good spot. Mr. Misadventures tucked himself into a rock with a platform to capture the canyon and the Colorado River. After about 30 minutes, he decided it wasn’t the right spot so we walked around and stumbled upon another ridge that was just perfect. It was also being co-occupied by a fellow photographer from Mesa who we chatted with as sunset hit and the hubby captured photos. This spot kind of reminded me of the Black Canyon of the Gunnison a bit. 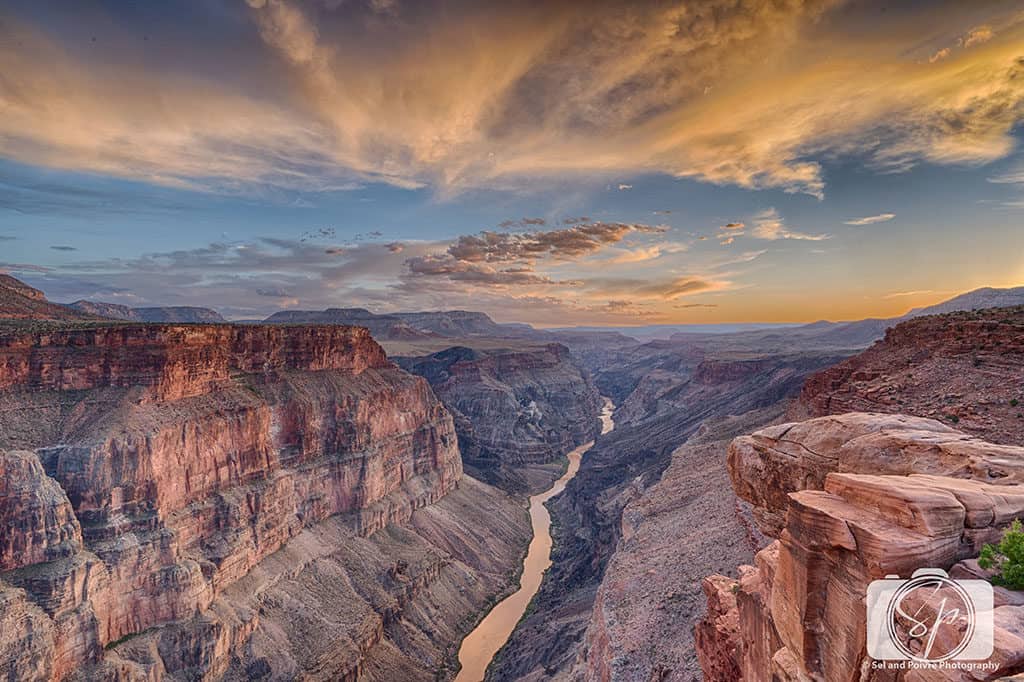 When Mr. Misadventures was satisfied we walked back to camp enjoying the first of the stars. As we reached our spot the stars were outrageously beautiful twinkling in the dark night sky. You really forget how bright they can be. We even got to see the Milky Way in its full glory along with a fun shot of the tent in the evening. The tent was also pretty in the evening, Mr. Misadventures had lit the lantern in it before setting up his camera for the star shoot, so we captured a picture of the truck and tent against the red rocks and twinkling stars. 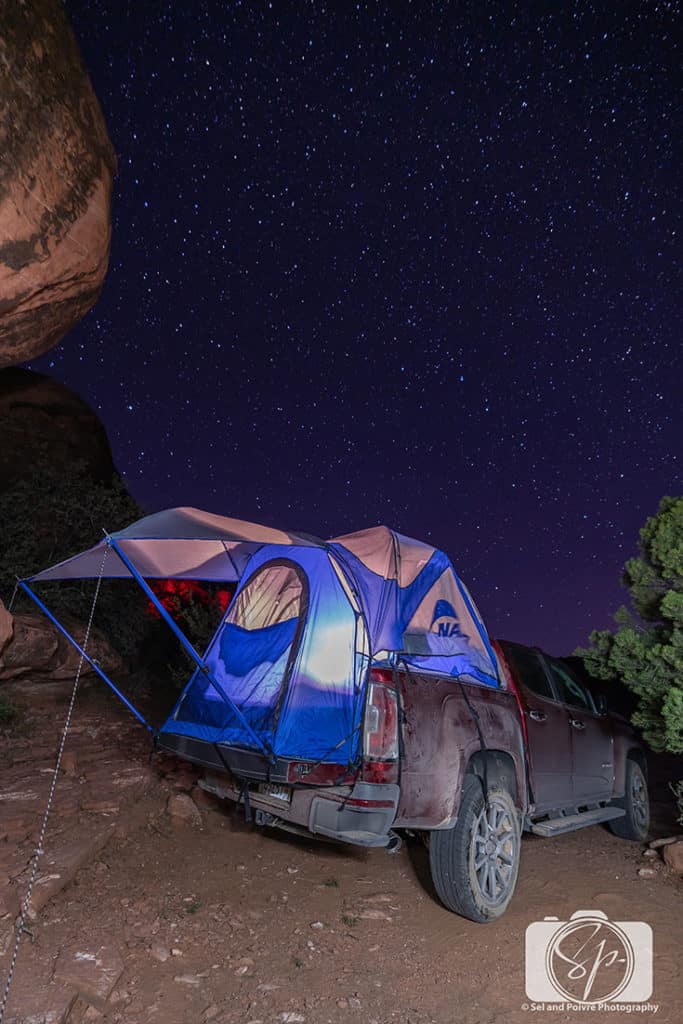 The next morning we got up, had breakfast and broke camp. We also used the opportunity to charge the batteries on the hubby’s new Sony A73. There are all kinds of plugs in the truck and even a charging pad for phones which is awesome in a world where there are too many cords! 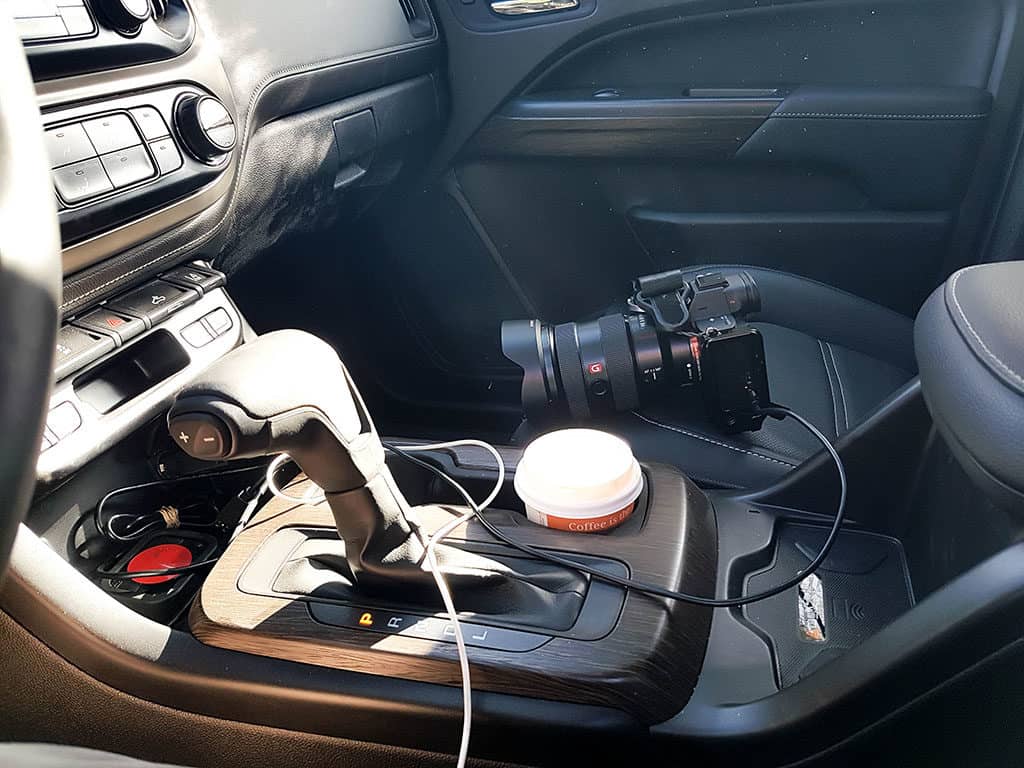 That tent that took an hour to set up? 10 minutes top to take down. We packed the truck back up and headed to the North Rim of the Grand Canyon. We’ve been to the South Rim many times it’s the spot most people visit because of its accessibility from Vegas, LA, Phoenix etc. The North Rim is farther away.

No offense to truck drivers but the Canyon Denali rides like a car! It’s compact which I think is great for a first-time truck owner and those who like to off-road. Those 61 miles back to Highway 89 were a breeze! 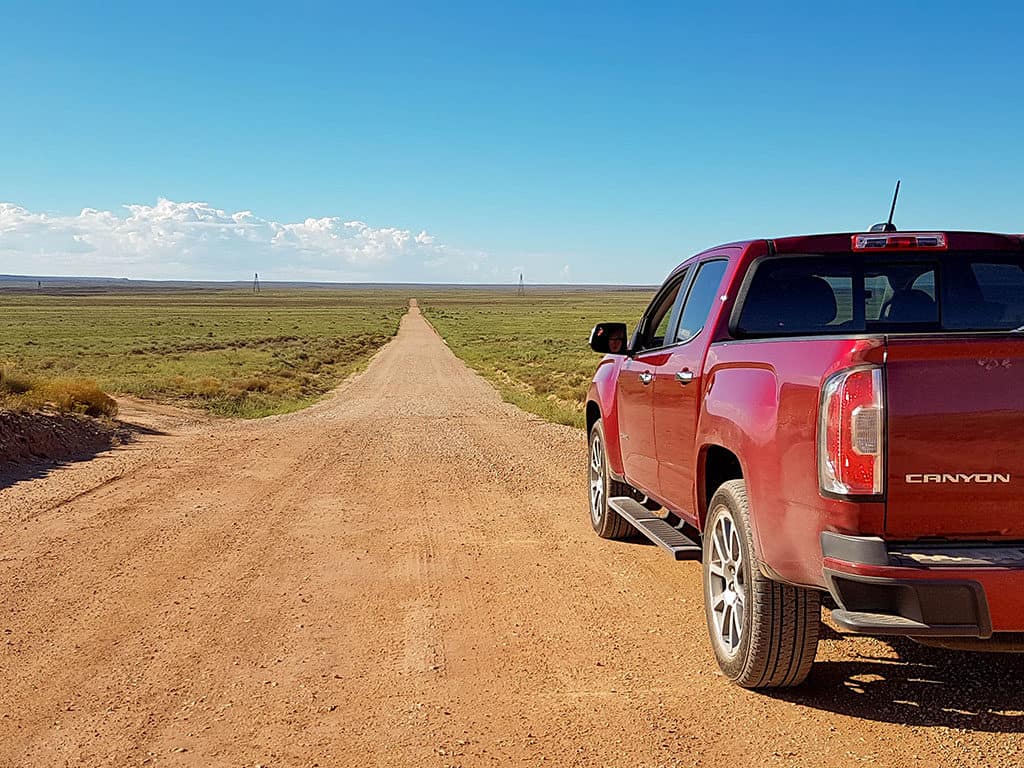 We arrived at the entrance of the Grand Canyon and had lunch on a logging road. Another thing I like about this truck is the bed is an instant table! 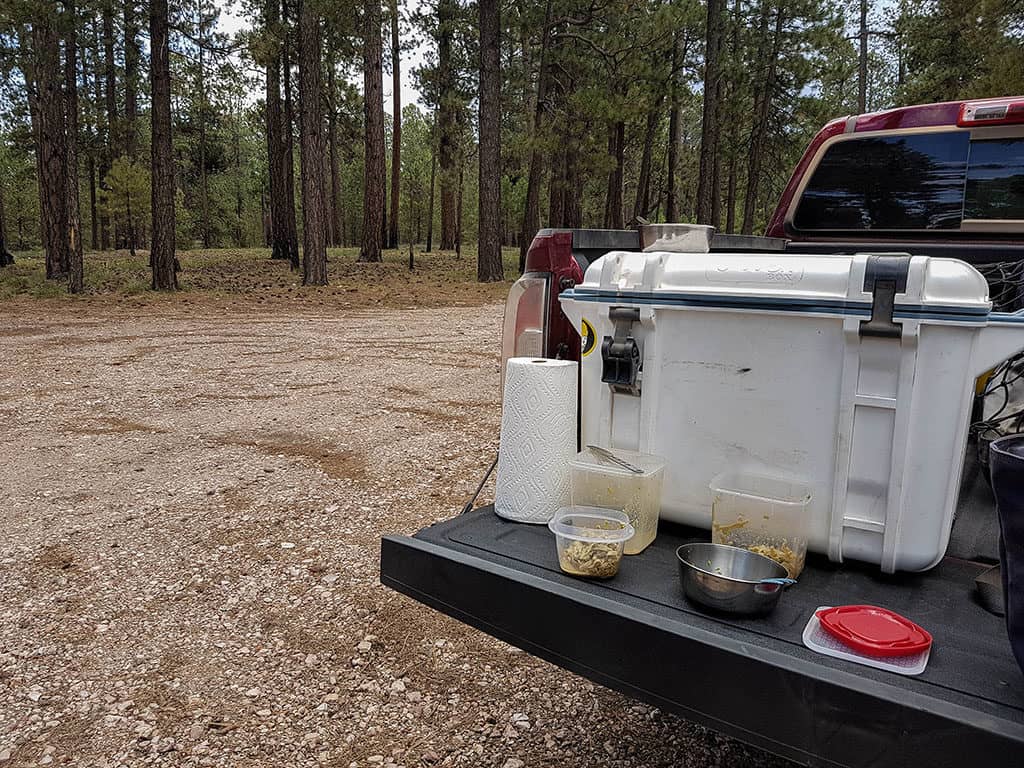 As we were eating lunch huge rain clouds began forming and thunder began clapping. We kept on going. Honestly, we don’t have the best luck when it comes to the Grand Canyon. Our first trip in 2012 it hailed and then poured and I remember eating lunch in the back of the rental car under the canopy of trees. But actually, it’s kind of a good memory.

The next trip it snowed and it was difficult to get around. Our third trip, it was freezing cold and we participated in a very crowded sunset. The last trip we took Madame Mr. Misadventures (my mother in law) while she was visiting from France and it was cold with bitter winds.

So it should have hardly been a surprise to us that we drove right into an ugly storm.

One thing to note: Pack for cold weather at the North Rim. The temperature dropped 40 degrees while we were there. There was even a dusting of snow on the ground! (This part of the park is closed October to May.)

The route to the North Rim entrance has gorgeous meadows that reminded us of Yosemite. The amount of Aspen trees is breathtaking, they are my favorite tree! 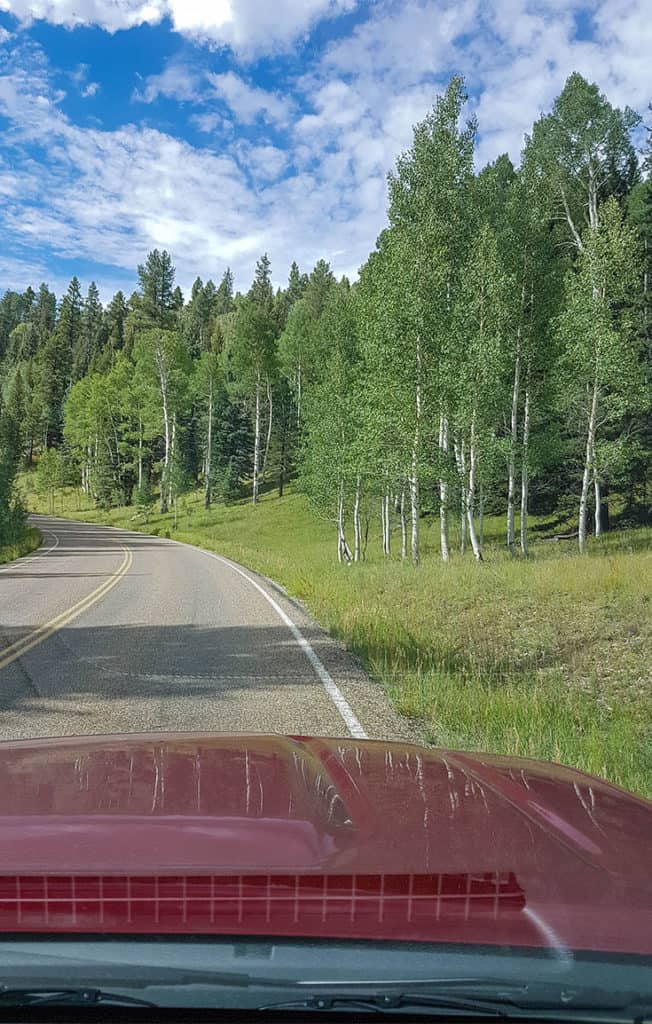 Once you pass the ranger station it really looks like some of the wooded areas of Yellowstone. I kept expecting a bison to bust out of the trees at any moment as they are often wont to do in that national park! And it turns out they do have a herd up there! We saw signs but no animals.

Call us fair weather campers because with the rain and the cold we decided not to camp. We just visited the park and made a plan to come back and then headed home. But not before checking out some of the highlights. At the top at Angel’s Window and Cape Royal reminded me of Bryce Canyon. I’m so blessed to have visited all these places. 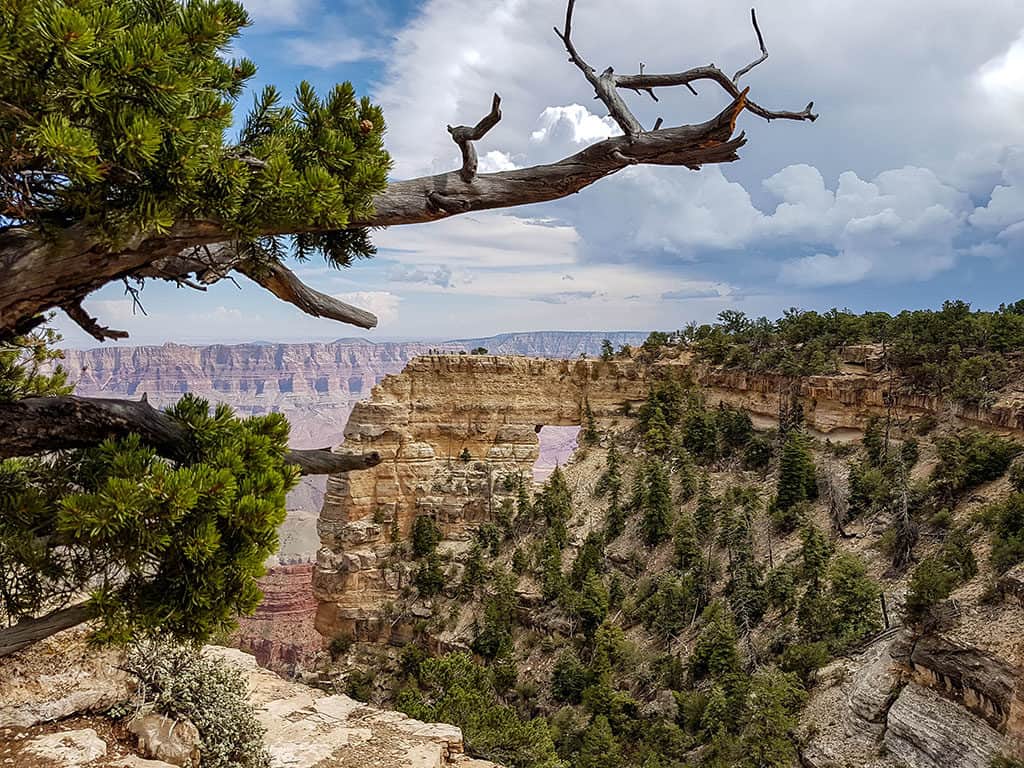 The North Rim is pretty spectacular. It gets lots more rain and snow so the rocks have a lot more drama to them. 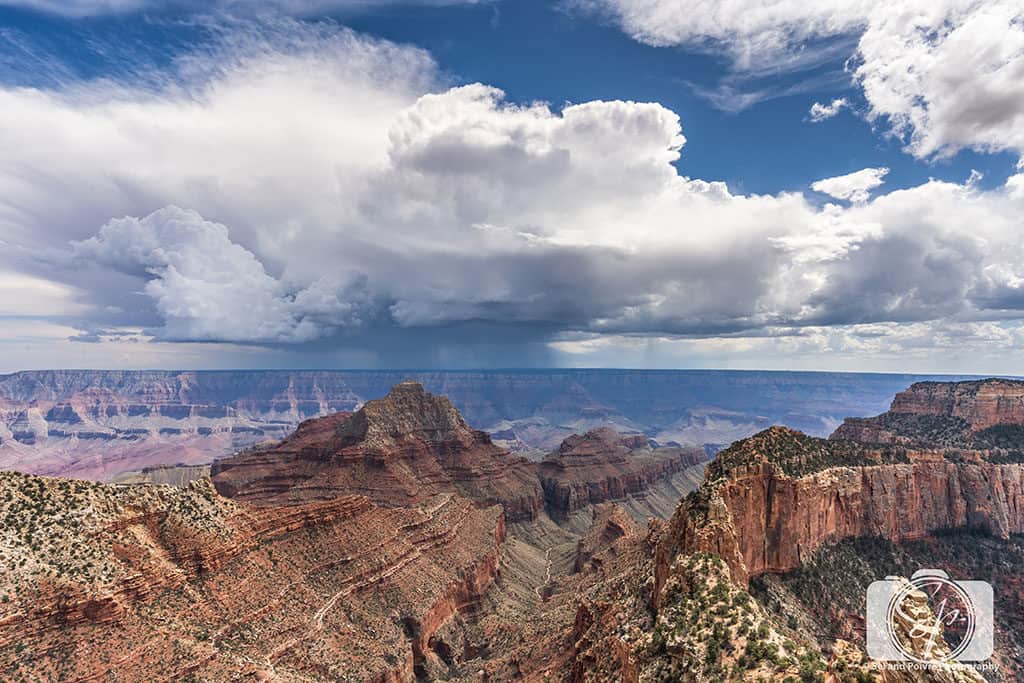 The route back to Phoenix is stunning, we’ve driven through several times, with and without the RV. You drive through the Vermillion Cliffs and we kept stopping to take the majestic landscape in this part of the Southwest. 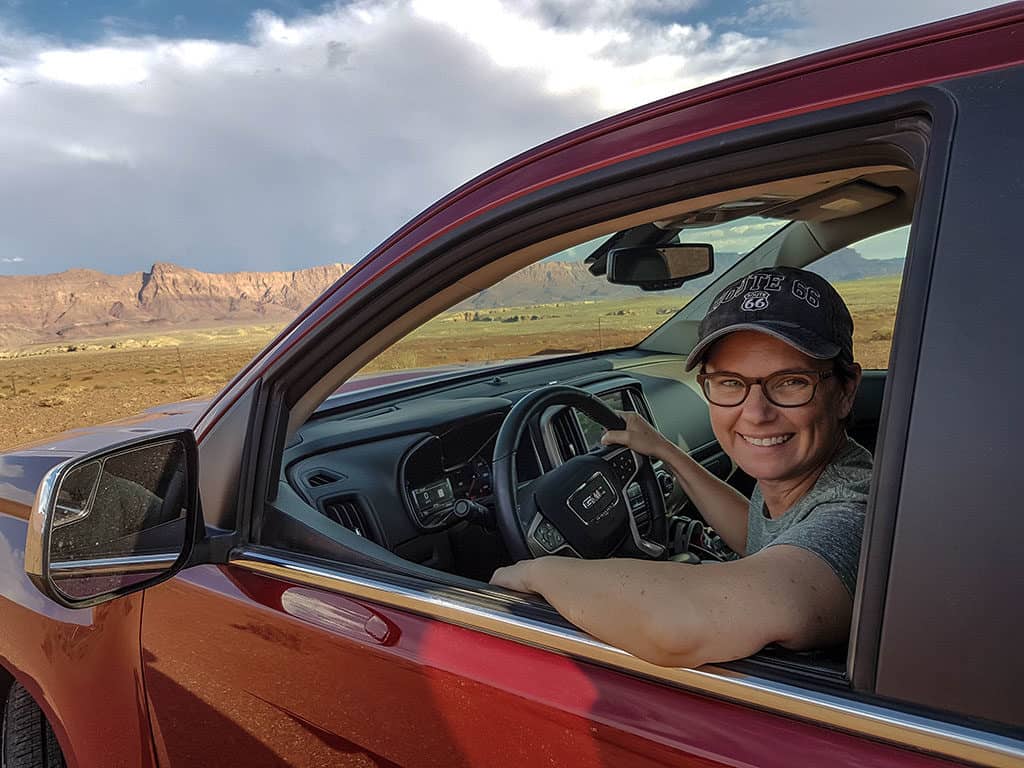 The North Rim is 6 hours from Phoenix. With our Jeep, we probably wouldn’t have made as many stops as we would have been exhausted from the driving, but in the Denali Canyon, we were just fine and even had enough energy to unpack when we got home!

I truly love weekend adventures like this and road trips. I can’t thank GMC enough for lending us the Denali Canyon because I actually think we just found our next car! Err, truck! We are going to be truck people yet! 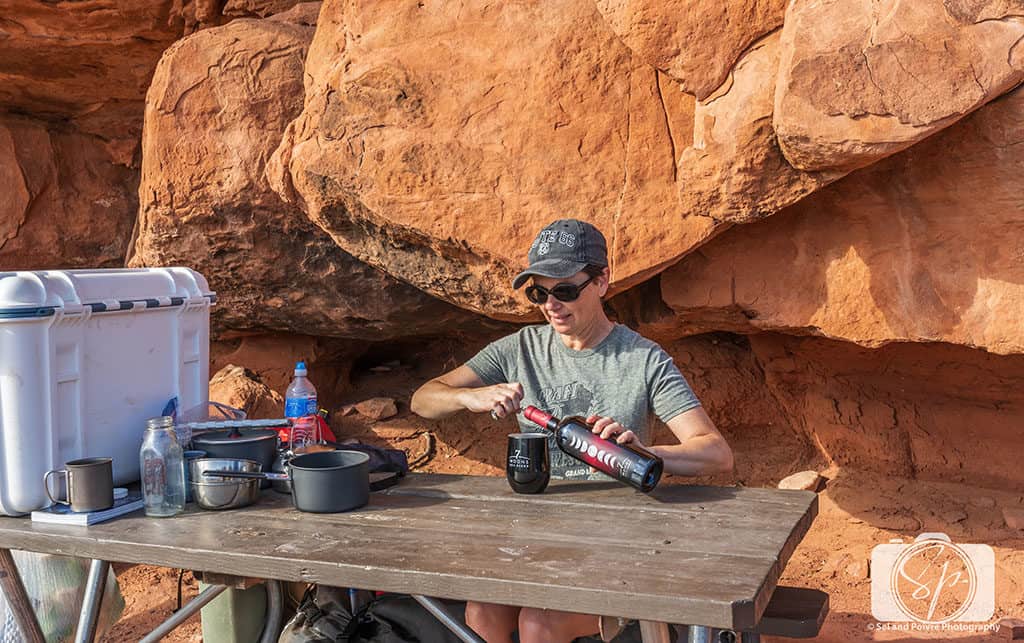 A couple of people asked what we packed to eat and drink during our camping trip to maintain our low carb lifestyle so here’s what we brought with us:

How about you? Have you been to Toroweap Overlook or the North Rim of the Grand Canyon? Do you enjoy off-road adventures and camping? Do tell!