RV Travels: Weekly Wanderings #42 – On the Road in Florida 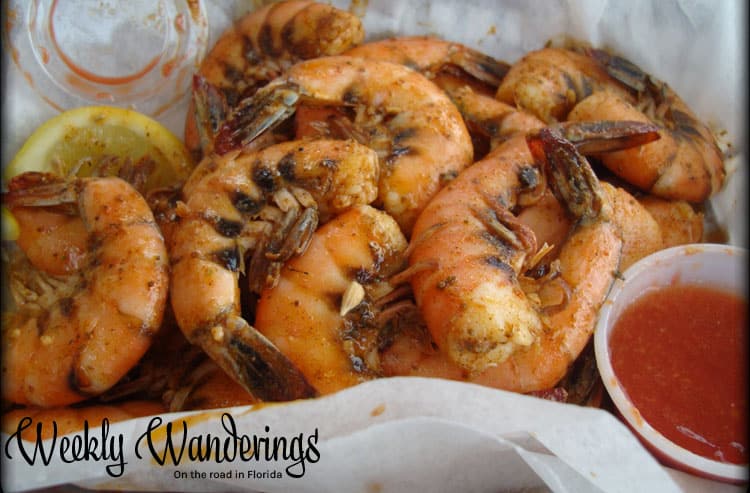 We left (ran actually from) Red Bay on Saturday. By all rights, we should have stayed a few more days, but we couldn’t take it anymore and the remaining things we wanted to fixecan wait.

Because we needed to be in Orlando on Friday (for our engine to be serviced – getting an appointment was an ordeal in itself ) we decided to take the southern coast route. A night in Mobile (Alabama), three nights in Panama City Beach, two nights in Ocala then onto Orlando.

The word for this week…shrimp. We have been eating it by the pound! And damn is it good!

In Panama City Beach we found a great seafood market on the piers, the fish was literally going from boat to shop. We bought a ton of shrimp, grouper and red snapper, all in season right now. Our freezer (and our bellies) are full and happy.

But as far as we are concerned, we didn’t like anything else that this area had to offer. It just isn’t our kind of place. We took a drive to Destin, just an hour east of PCB, and found much the same. So we wiped our plans and started again, hey if you don’t have some freedom, what’s the point of having an RV??!

We are staying in Ft. Myers after Orlando for two weeks and the Keys for ten days after that. Then we are going to head back to the west coast via the southwest. We’ll stop in Las Cruces for a week say hello to the parents in Phoenix, then head to Joshua Tree, Vegas and Zion before landing in Portland.

We are trying to adjust to the heat and humidity, somehow I thought it was only humid in the summer, boy was I wrong! We’ll be happy to get back to the desert cold and rainy Pacific Northwest!

In Orlando but heading to the space coast for the weekend before landing in Ft. Myers.

Anwyhere with fresh seafood is good.

P.S. it's really nice up here in VA right now -- Florida is overrated. You should skip Ft. Meyers and the Keys and just head up here!

They don't call the panhandle the "Redneck Riviera" for nothin'. ;) It might've been difficult with the RV, but I would've recommended stopping in Seaside. It's an adorable little town where they filmed The Truman Show -- and the water is just gorgeous. There are two other strange developments in the area that are worth seeing as well... I wrote about them once. Might be something to consider if you head through there on your way back!

@Katie, I remember your post on Seaside and it did look adorable! We've had better luck in Ft. Myers because of all the parks. Looking forward to chilling out in the keys. I never knew that area was called the Redneck Riviera, makes total sense!