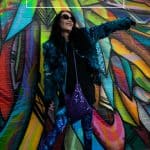 I present to you the first Tourist in My Town on the hazy, crazy neighborhood of Haight-Ashbury!

As part of a sampling of highlights from one their Northern California guided vacations, I joined the Trafalgar team on a real insider’s experience of this iconic area of San Francisco. This is where hippies were born, the epicenter for all things smoking and grooving in the ’60s.

After a lunch at Cha Cha Cha, a local gem serving “New World” cuisine (a mixture of Latin and Caribbean specialties) we met our host for our tour, Izu of Flower Power Walking Tour.

And here she is.

She is a character, yes. But she is one smart cookie. We only spent a few hours with her and I went away with my head spinning. I had never visited this part of the city. Of course, I vaguely knew about its history, or so I thought. What I realized is that I barely knew anything.

The amount of knowledge and the number of personal experiences that Izu herself went through could fill volumes and volumes. As it was I have pages and pages of notes. Her personal anecdotes and method of delivery are one part fascinating and one part over-the-top entertaining! Just Google “Izu Haight Ashbury Tour” and you can see pages and pages of people raving about her. So much so she was named the San Francisco Bay Area tour guide of the year!

And of course, Trafalgar knows this. The source really exceptional people who run top-notch tours and that is the work they do behind the scenes to ensure that all their guided vacations or guided holidays exceed your wildest expectations! They nailed it on this one.

You’ll learn about the history of the musicians, the artists, the architects, the activists. The funny stories, the scary stories, the unbelievable stories. Things like how and when the phrase “Turn in, Tune in and Drop Out” was born and the impact it had on a generation of people. Or how The Grateful Dead and the Hell’s Angels became friends. Crazy fascinating stories about a neighborhood that certainly has helped to shape the unique character of San Francisco.

The following photos are just a small sampling of the spots we stopped at. I actually want to re-do the tour because I was taking so many shots and trying to capture notes that I am pretty sure I missed some stuff!

Part of the building that houses the San Francisco’s Haight-Ashbury Food Bank, a spot built by architect Bucky Fuller that has oodles and oodles of history just in this one corner. In fact, Izu lived here at one point in time when she was a teenager when it was a commune that housed 70 people!

This is 709 Ashbury where the Grateful Dead lived between 1966 and 1968 (the Hell’s Angels lived across the street!).

These were Banksy pieces on the sidewalk in front of the house!

The actual intersection of Haight and Ashbury…there were so many things to photograph I was on snapshot overload!

Like, check out the mural with Jimi Hendrix on the opposite corner (on the left in green). Sorry, I didn’t have the right lens to get closer to, another reason to return.

And there was the wonderful (and freshly added) mural across the street from Coffee of the People (Masonic and Haight) where Izu posed for us in the photo above. Absolutely gorgeous!

I applaud JP Smith (who I introduced you to as part of the Trafalgar Team) for discovering this gem. Not just curating the tour which is a really good tour, but finding Izu, the best of the best and the one that provides a real insider experience, it’s the added touch that comes with working with Trafalgar.

If you aren’t booking a whole vacation and you are coming to visit San Francisco, take an afternoon and book this tour from Flower Power Walking Tours and make sure you request Uzu!!!

How about you? Have you visited Haight-Ashbury in San Francisco? Have a memory or a funny story? If you haven’t, do you want to?

Read more about the Haight-Ashbury neighborhood from a local.

Disclosure: I was a guest of Trafalgar for a tour in San Francisco and Napa. I was not required to write this post, nor am I being compensated for doing so. All opinions are 100% my own.

Trafalgar from the top
← Previous
French Friday – A Passion for Paris with Artfully Adored
Next →
Click here to cancel reply.

I've never visited Haight-Ashbury but am a big fan of music history so would love to... if I ever take a trip to SF I'll make sure to go on the Izu Haight Ashbury Tour!

@Shelley, I highly recommend it!

@Charu, thanks so much. Warm memories....exactly, like the ten minutes we got to spend together warming up over soy lattes!

Your photos are stunning!! I'm so happy you so gamely joined us tourists in your town. I will never get over little flower power tour guide -- the best ever!!

@Abby, she was sensational!

Very cool pictures! I also like to really learn stuff. It's not enough to snap pictures. I want to retain every detail.

@Jennie, happens to me all the time, why my hubby and I make a good team, he can snap photos while I digest, I just don't always have him with me ;-)