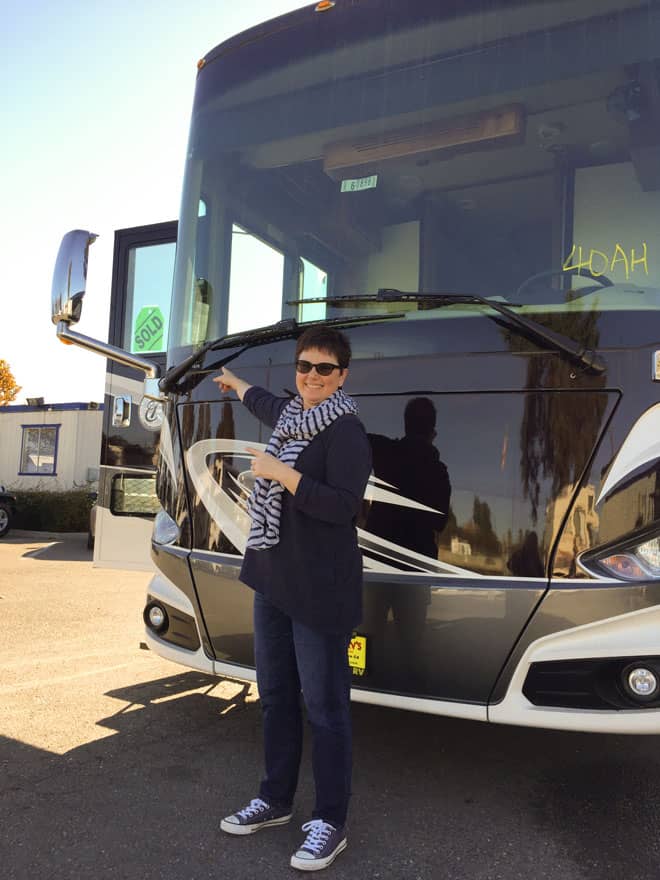 It has been just a little over a month that we have owned our new “home.” And a month since we picked up our life and drove to Phoenix and while we are still prepping for our first trip in January there are a few things I’ve learned, four to be exact!

Your sales guy is probably not a good driving instructor.
We had the world’s best sales guy. I mean the best. He was cool, zen, provided no pressure on the sale and was way patient. He answered a lot of questions, provided a lot of answers and gave us lots of good tips – way before we committed to buy. I have never seen someone in the vehicle sales industry like this. He totally rocked.

As someone who has driven an RV for more than fifteen years he was a great source of information. So I wasn’t worried when my hubby said that Galen was taking us out on a 3-hour crash (sorry) course on driving before we took possession and headed to Arizona, a 12-hour drive that we would be complete newbies on. We did drive the RV for a test drive, but we had exactly 30 minutes behind the wheel.

I should have been more nervous.

Obviously we made it. And obviously so did the RV, but let me tell you, it was close.

We headed out to the freeway and out onto Altamont Pass. For folks who have been around the San Francisco Bay Area for a while, you’ll know that this highway between Livermore and Tracy is a major truck route for semis hauling along the West Coast. And it hasn’t been well maintained.

That was our first 30 minutes. I think I saw my life pass before me at least 10 times in the first ten minutes as we came super close friends with a bunch of 18-wheelers!

Galen didn’t really have a plan, or at least not one that was super thought out. Mr. Misadventures wanted to see how a gas station worked. Galen had us exit where he thought there was a fuel stop, but it was the wrong exit so we had to get back on the highway and take the next exit. We got to the gas station and Galen had us drive through it just to see how it flowed rather than stop and get gas.

We got back on the highway until we got to Vasco road, a beautiful back road that cuts between two suburban areas of the Bay Area. I used to love to drive it in my car 20+ years ago, but for someone driving an RV for the first time, not sure tiny two-lane roads made the most sense.

We went through two one-lane bridges, the first one we passed 10 seconds before a huge truck came around the corner on the opposite side. The second we almost didn’t make it into as there was a huge ditch to the right of us and it was only with the momentum of the vehicle itself did the back left tire make it, if we had been towing the jeep, it would have been in the ditch and probably taken the RV with it.

But we made it through okay. I know I was white as a ghost at this point and I am pretty sure Galen wished he hadn’t suggested the drive!

Then we got lost.

And then my hubby informed Galen we only had an eighth of a tank of gas.

We headed down a road Galen thought led back to Vasco road (or the freeway, I can’t remember), it clearly had one of those NO OUTLET yellow hazard signs at the entrance. But according to Google maps it led to where we needed to be, so onward we pushed. The tiny two-lane road became one. The one-lane road became dirt. We went up small hills and around curves on this one-lane road until we got to the end. Right into the front yard of a rancher. His house on one side, his barn on the other.

That’s when we tried out our first 3-point turn in an RV.

It’s also when we almost killed Galen. He was outside trying to direct Mr. Misadventures when he reversed and providing signals on how close we were to the rancher’s fence. While switching between Drive, Neutral, and Reverse, my hubby took his foot off the gas and nearly squashed our sales guy!

But he didn’t. And we got that baby turned around. And we made it back. We took Galen to lunch, we plied him with beers and we survived.

That night when Mr. Misadventures was asleep, I heard him mumble/sleep talking, “I want my money back…”

RV manuals suck
There is a lot to learn when it comes to owning an RV and it’s overwhelming. We had a 4-hour walkthrough with our technicians but they didn’t spend a lot of time on any one thing, and even though I wrote copious notes, not all of it stuck. We have been reading books and forums and my notes making sure we don’t screw up anything in the first month.

What we have come to understand is that RV’ing is basically trial and error. Or trial by fire.

And analog. Not much is online. We have a pile of papers 2 feet high of manuals, all of which are pretty much useless.

We are forced to seek out info on the internet.

Now, I love the internet just as much as the next person, but you know its not accurate right? (I hope someone before me told you not to believe everything you read on the internet!)

Yet it is our only recourse. I can tell you, that in seeking out info and videos, I have seen a lot of corny Southern RV salesman make some bad videos. Makes me love Galen even more, despite what happened in lesson #1!

We’re planners. Love to-do lists. So the fact that we are going to need like ten checklists to make sure we don’t kill ourselves or wreck our RV isn’t the worst thing in the world.

But we could have done with a few BEFORE hitting the road without any freshwater.

Of course, we were only driving between the San Francisco Bay Area and Phoenix, had plenty of water in our refrigerator and spent the night at a rest stop so it was no big deal.

There is a lot to check before hitting the road and setting down. Each. And. Every. Time. 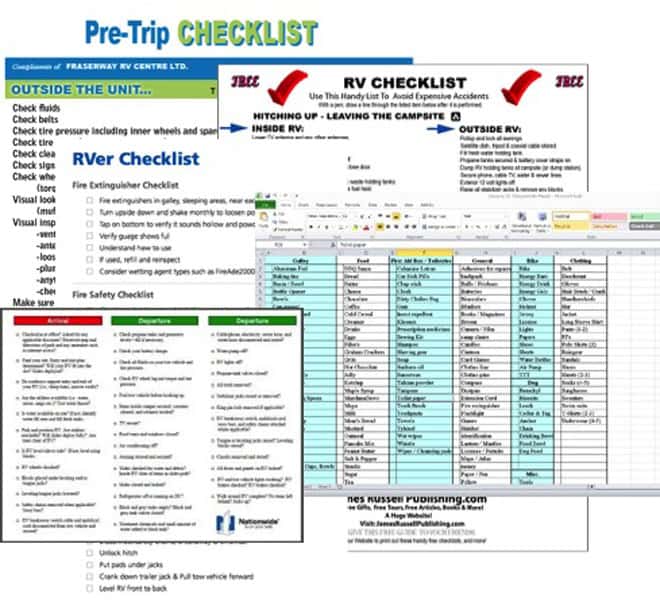 But lordy, there are a million of them out there and none of them seem comprehensive, so we are going to have to make our own!

Truck stops are a world of their own

Okay. So I have only been to four. But they are pretty strange. All I’m saying is that why should truckers and RVs be relegated to a world of bad coffee and fried food? I feel like Jen Lancaster in Bitter is the New Black

(if you haven’t read this book you need to!), but seriously, would it kill Starbucks to make a drive-thru big enough for an 18-wheeler to go through?!!

I am pretty sure I am going to have lots more to say on this topic as we hit the road!

That is my first month as an RV owner, a few bumps and bruises, but we are really looking forward to the adventures ahead. And who knows, maybe I’ll get to make a living as an RV manual writer!

Let’s discuss! Anything you want to know? Any advice for me?