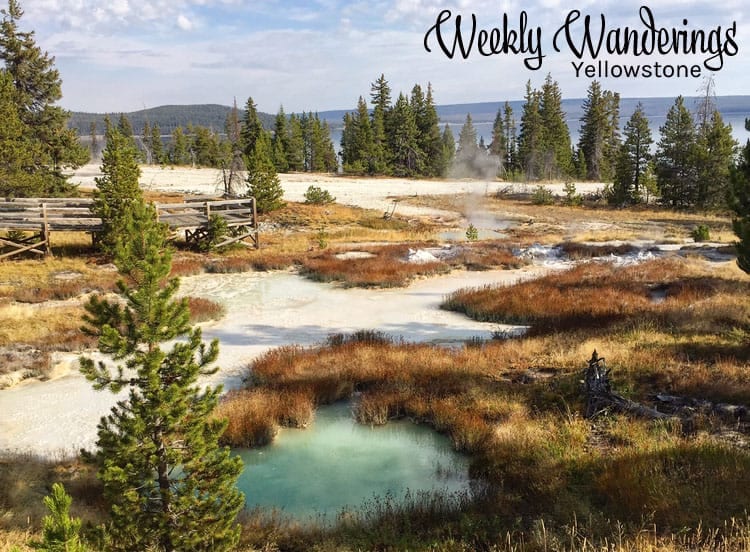 Last week in Yellowstone! Then we have to go back to the real world of highways and freeways and retail malls. At least for five days until we get to rural Alabama for RV repairs. But let’s not think about that quite yet!

Over the weekend we did some sunrise and early morning shoots, but got fogged out or clouded out. There are so many micro-climates in the park, the weather is unpredictable. Weather reporting is inadequate for the park, so you just have to cross your fingers and hope for luck.

We shifted our activities this week from wildlife, landscapes, and geysers to star photography. There is no moon for basically the entire week and Mr. Misadventures is taking advantage of that to take photos in various spots throughout the park.

We started on Sunday evening. We did sunset at the Great Fountain Geyser and then sat on a bench under a tree near the Grand Prismatic to eat dinner. Driving back from there to our star site we saw a terrible, terrible sight. A bison had just been hit by a car and the ensuing accident involved three cars. I don’t think I’ll ever forget the sight of the beautiful beast dead in the road.

It speaks to some of the issues with the park in general. Too many cars and too many people not doing what they are supposed to do. They need a lot more rangers and I lot more controls to ensure the safety of the public and the park.

Monday we reverted to morning and daytime adventuring because there was NO WAY I was going to miss the first presidential debate! But we were back at it Tuesday night. We went to the West Thumb Geyser to do star photography over the Abyss Geyser and Lake Yellowstone.

Let me just confess now. When we do these star shoots, I am a total complete wus.

For one, with all the geyser/mist/dark forest trees, the scene is like a bad horror film where an ax murderer is going to jump out and kill me (I have read WAY too many crime/serial killer novels). But my biggest fear is bears, I know logically it is very unlikely that we would have trouble with a bear, but it is still an ever-present concern running through my mind as we stand in the pitch dark a half-mile to a mile away from the car.

Of course Mr. Misadventures and I converse, we have bear spray and I have a bear bell, although since our friends called it a dinner bell, I don’t use it much. I have started playing music, but then I can’t hear what’s going on around us, I tell you, I’m a mess! This is when I really appreciate the photography workshops that my hubby goes on with others because the 5-10 photographers can keep each other company and safe. There is no way I am going to let Mr. Misadventures out there by himself, so I bite the bullet and stand out there thinking like a crazy person.

The resulting photos are really great, so at least it is not all for nothing!

Yesterday was overcast so we didn’t go out in the morning and we knew we would be clouded out for the evening so we went out in the middle of the day to do some scouting for our last spot for stars around Lake Yellowstone tonight. On the way back we spotted a grizzly. It was the first one we’ve seen on this trip and it was the biggest bear I have ever seen. We stayed awhile watching him feeding on tubers, it was pretty cool.

We hit the road on Sunday with single night stops in Billings, Rapid City, Sioux Falls, and St. Louis.

I love Yellowstone. However it can be intimidating. I once saw an idiot with a camera chasing a bear cub into the forest in order get a better shot! Common sense does help when enjoying Yellowstone. :-)

Such a beautiful site to see, but sad to hear the negatives!

What a gorgeous place. I've never been there.

So sad about that bison. :( I don't blame you for being freaked out during those night shoots -- I'd be so scared! I'm excited to see those photos, though.