I am not going to do a review of the movie Julie & Julia, my blogging buddy Clarabela over at Just Chick Flicks has already done that for me. What I do want to talk about is how this cultural icon who single-handedly brought French cuisine and French cooking techniques to the heart of Americans, was hardly known to most French people before the movie came out!

Despite that fact that Julia received a Legion of Honor in 2000, relatively few people in France actually know who she was. My husband cooks, adores cooking, has a lot of French cookbooks and had never heard of her. So with all the recent publicity for the film opening in Paris, it has brought her cooking, her book (which has never been translated into French), and her legacy into mainstream discussion. Here is a great article on the topic too from the New York Times. 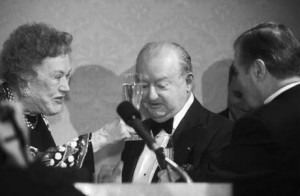 Julia after receiving her Legion of Honor in France. Photo credit: Robin Shotola

But really it is not important how she was viewed in France before. This movie has now shown the French how much their food and their culture was (and is) truly adored by Americans. All before the problems with wars and “freedom fries” and definitely still today.

It warmed my heart to see the scenes of pure, unadulterated enjoyment of simply eating! And if my husband’s reaction to the Julia Child portion of the movie – feeling proud and honored that she loved French food and culture to the extent that she worked years to bring it to the American people – then I am sure that the rest of France will feel the same.

I particularly like the comment in the NY Times article above when Julie Andrieu, a French television personality and cookbook author, who after watching Julie & Julia felt compelled to go home and make boeuf bourguignon according to Ms. Child’s recipe. She said, “I cut the flour in half, and it turned out to be the best I had ever made.”

Some people still complain that French food is too rich – too much butter, too much fat. But everything in life, and as Mireille Guiliano has written about in her book French Women Don’t Get Fat, everything in moderation. Besides, Julia Child and her husband, Paul, smoked, drank, and ate Julia’s French food their entire lives and died at the ripe old age of 91 and 92 – how can you dispute that?

I saw and loved the movie! How interesting that Julia was not well-known in France, I did not know that.

@La Grenadine - will you see VO or dubbed? If you see dubbed - I am dying to know which French actress is playing Julia - her voice was so distinct!!! I will buy the French version of the DVD just to hear that!

I didn't know Julia Child before seeing the trailer of Julia & Julie this week. I want to see this movie, haha.

But I agree with that : French food is fat. But you can just eat less food, and that's just like other food, haha. ^^

I loved reading this post and can only hope that Julie & Julia might be the olive branch in the horrible 'freedom fries' debacle. The reality, whether the French are aware or not, is that very few people in the U.S. bought into the ban on all things French. Because, quite honestly, we love the French culture, language, and beauty. Peace comes for understanding and appreciating others not by starting a war over french fries. : ) Here's to Julia Childs who is promoting peace postumously.