Cannes France…is there any place on Earth that screams glamour more than this city on the French Riviera? With its luxury shops, palatial hotels and gourmet restaurants, not to mention golden beaches filled with bikini-clad sunbathers, playboys cruising about in luxury cars and of course the annual film festival, the place is something of a magnet for the rich and famous.

But you don’t need to stay in the city itself and pay its high prices to get a slice of the glamour, one day in Cannes is possible. If you are in nearby Nice, it makes for a much more affordable base, as well as being a beautiful and cultured city in its own right. Located just 30 minutes away, you can rent yourself a car in Nice and then make the leisurely drive along the coast for a day-trip in Cannes. Below are a few suggestions of what to do in Cannes for a day.

Get a taste of Cannes luxury at ZPlage

Want to be glamorous and do a little celebrity watching at the same time? You can feel like a Hollywood star, at least for a few hours, by heading to the famed restaurant/bar ZPlage at the Hôtel Martinez. It may be pricey, but this is a favorite haunt of the rich and famous when they visit Cannes and lunch or a drink here is an unforgettable experience. Enjoy the luxurious surroundings as you sip on a freshly made cocktail and look out across the sea.

Explore the port of Cannes

Take a stroll down to the picturesque Vieux Port (Old Port) of Cannes to see a mix of small fishing boats and luxury yachts and explore the nearby streets, which are great for shopping as well as finding somewhere for a drink or bite to eat.

From the port, you can also catch a boat out to the Lerins Islands. These comprise four islands, two of which are uninhabited, located just off the coast of Cannes. One of them, Ile St Marguerite, is where the famous Man in the Iron Mask was held for 11 years. Meanwhile, the only inhabitants of Ile St Honorat are a group of Cistercian monks, who have called the island home continuously since AD410.

Visitors can explore the monks’ stark medieval church and see the ruins of the 11th-century monastery on the sea’s edge.

Relax on the beach 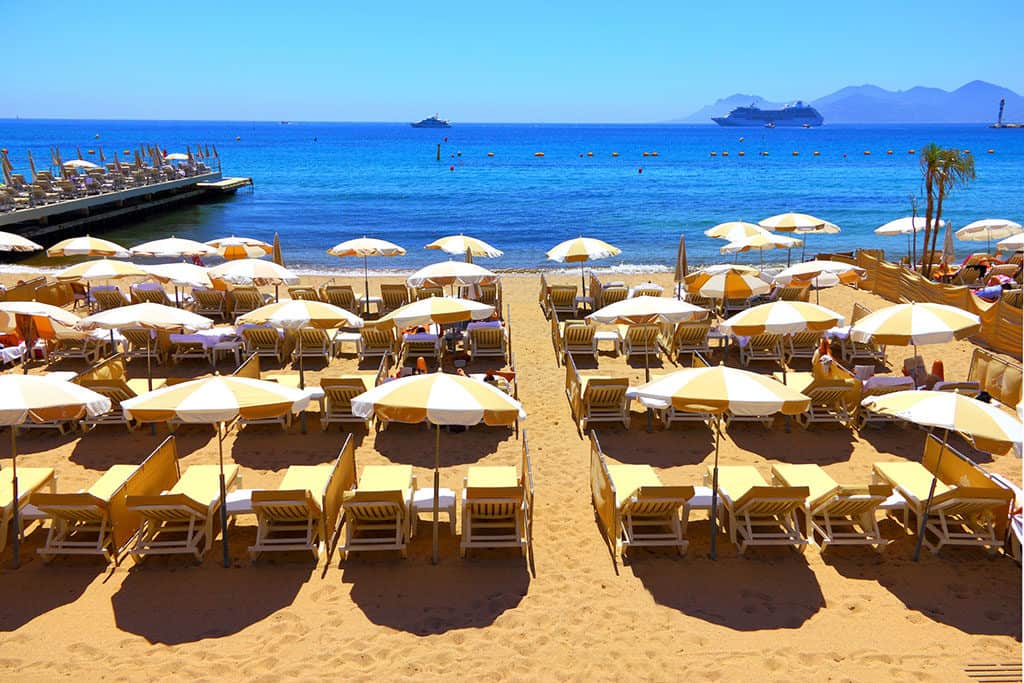 There’s no shortage of sandy beaches in Cannes. Unfortunately though for day visitors many of these are owned by hotels and reserved exclusively for their guests. However, Plage du Gray d’Albion, situated just 200 meters from La Croisette, is one of the exceptions. Although also owned by a hotel, this beach is open to the public, but you’ll need to pay for a lounger and parasol. Still, there’s nothing like chilling out on a beautiful beach in one of the most glamorous cities in the world.

There is nothing like a French farmer’s market and Cannes has 2: Marché Forville and Marché Gambetta, both closed on Mondays. There you will find the usual suspects of fresh fruits and vegetables along with a plethora of seafood. Marché Forville is an indoor market which is nice during the heat of the summer. If you do plan on shopping (and I highly recommend you do) then make sure you check out my French market etiquette tips so you don’t look like a dumb tourist 🙂

Of course, the first thing you think about when someone mentions Cannes is the film festival. Running from mid to late May, tickets for the festival itself, held at the Palais des Festivals, are pretty hard to come by and usually only reserved for industry insiders. But you can still get your hands on free tickets to screenings for selected individual films, usually after they have already been shown for the first time.

Head to the Cannes Cinephilesticket booth outside the Palais des Festivals to see what’s available. Alternatively, celebrity spotting at the Palais is a favorite pass time during the festival season. You can watch the film stars make their way down the red carpet. Get there early as crowds can build up quickly. Meanwhile, if you’re not in town for the festival, a trip to the Palais des Festivals to see where the magic takes place is still worth it, even if just for the good photo op.

As you can see, there are many things to do in Cannes France in one day and it doesn’t require staying in Cannes at all! It is a great spot for a day trip, particularly if you are staying in Nice or other towns on the French Riviera. You truly can visit Cannes in a day!

How about you? Have you been to Cannes or Nice? What did you think?

One thing I didn’t write about is food, the French Mediterranean cuisine is delightful, lots of seafood! I love the Eater guide because it is updated frequently and there are 2 great posts from the Culture trip on the best restaurants and affordable restaurants because Cannes is expensive!

I mentioned Nice, but if you are following an artistic journey through the south of France, I’ve got some suggestions for you!

Find more interesting spots in the south of France in my AFAR Wanderlist.