Upbeat Smoothies That Have A Certain Je Ne Sais Quoi 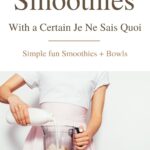 Smoothies are the perfect way to start your day. They’re quick and easy, and can be made with a variety of ingredients and flavors, and they’re a great way to get in more fruit and veggies. But what if you want something more? Something that will actually make your day better rather than just providing breakfast? Another thing with smoothies, though, is this: they’re not very French, and they’re often dull and bland. Worse still, some green varieties can be wretch-worthy.

Don’t allow a few bad apples to put you off. Smoothies are like anything else: done right, they taste amazing. Done badly, and they taste awful. I’ll show you some upbeat smoothies that have everything from protein powder to spinach – but don’t worry; we promise these drinks still taste good! In this post, I share some smoothies that have a certain, je ne sais quoi. As with all smoothies, they’re easy to make. But it’s just a question of getting the right balance between smoothness, sweetness, and richness. 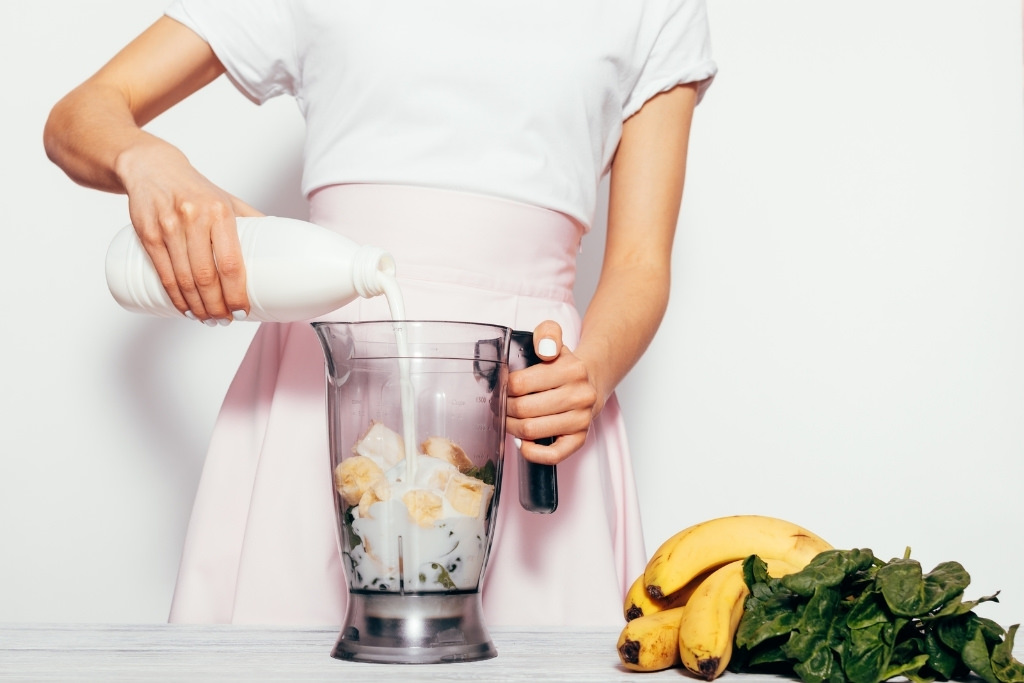 You wouldn’t think that French toast and smoothies would go together. And, quite frankly, they don’t. But, you can recreate the essence of French toast in the form of a drink. And it’s weirdly healthy and delicious.

Start with half a cup of cottage cheese and some Medjool dates – the big, plump juicy ones you always find in boxes, I am a fan of the ones you can find in Mecca California near the Salton Sea. Then add the flavorings – (French) vanilla bean paste, cinnamon, almond extract, and a dash of nutmeg. You can then add some collagen (here is Jennifer Aniston’s favorite), whey powder (check it out here), or another supplement, and half a cup of vanilla almond milk. If you like your smoothies to have a little extra body, also add a small amount of xanthan gum – a kind of fiber that helps particles congeal (I use the one from Bob’s Red Mill). Then just blend and voilà, you have the perfect French toast smoothie. Who knows, you could even drink it as an accompaniment to your actual French toast.

If you’re looking for something with a bit of a kick, then a mango and ginger smoothie is right up your alley. Ginger is fiery and helps to bring out the flavors of the mango. Plus, this recipe has lentils, which normally would be très French, but these are red, so we will just pretend, d’accord?

Making it is easy. Start by cooking the red lentils which should take around 25 minutes, and then allow them to cool. Then add them to your blender along with frozen mango chunks, some carrot juice, and some freshly-chopped ginger. Then add some honey and a pinch of cardamom and blend the whole lot. You should end up with something that tastes like a rich, sweet, and refreshing smoothie which, thanks to the lentils, also has extra protein to fill you up.

Lots of people have experimented with the idea of adding avocados to smoothies. That’s because this fruit is rich in fats, unique for fruits in the plant kingdom. And because avocado pairs so well with savory foods, it makes a great base for savory foods. Mr. Misadventures also uses avocado to make a decadent low-carb chocolate brownie, but that is another story…

Making avocado smoothies is easy. Start with some plain yogurt and then add a frozen banana, half an avocado, some honey (French honey, bien sûr! Honey is produced in 22 regions of France.), and some fresh spinach. If you want to make it more chocolatey, just add some cocoa powder to the mix. 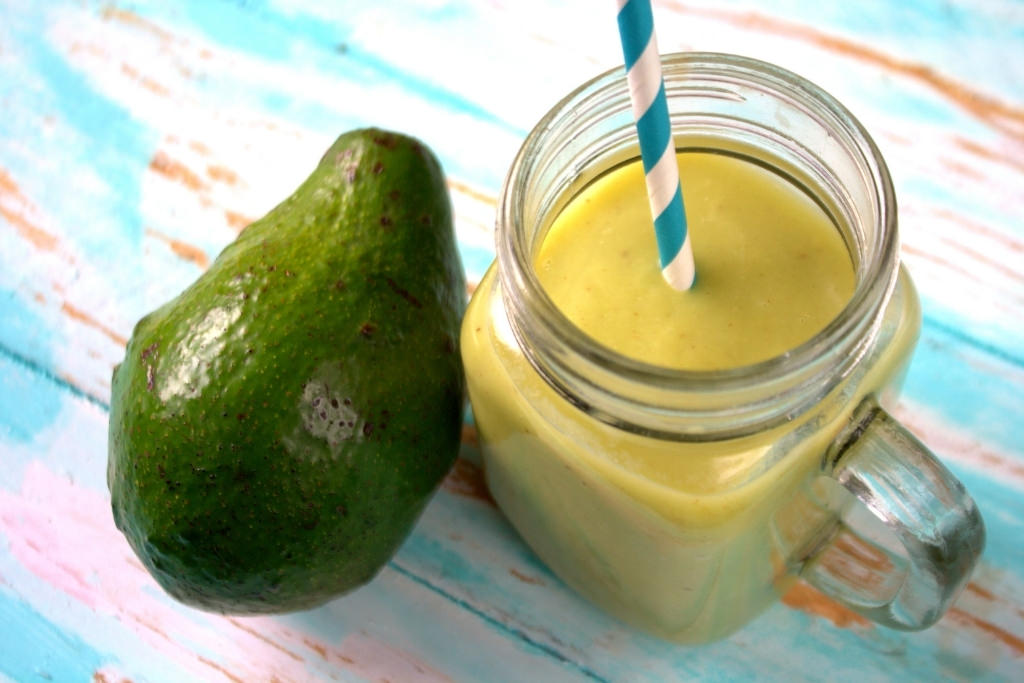 Pineapple is one of the best fruits for your body because it contains special enzymes that help you digest food. That’s why it can feel a little strange when you leave it on your tongue. Pineapple tends to pair well with chia seeds and greens. To make this smoothie, just put some almond milk, greek yogurt, spinach, banana slices, chia seeds (I use the ones from Bob’s Red Mill or Anthony’s), and frozen pineapple chunks in your blender and whizz them up. If you want a little extra sweetness, add dates or honey. Pineapple isn’t low carb, although the chia seeds provide a lot of fiber, so if you are on a low carb diet or have a low carb lifestyle, you can switch out pineapple for a lower carb fruit. French people would always try to use seasonal fruit like strawberries in June and July, for seasons without good fresh fruit, frozen fruit will work!

We tend to think of tofu as a savory dish. But it is also great in sweets as well. In fact, that’s how many Asians consume it. Making a tropical smoothie is simple. You just need a little sweetness and sourness. Start with a bag of frozen mango and add two cups to your blender. Then add a quarter cup of lime juice, 1.5 cups of pineapple juice, and 0.75 cups of tofu. Then add some freshly grated lime zest and whizz it all up. The result should be a thick, decadent smoothie that only contains super healthy ingredients!

Flaxseeds are among the healthiest foods on the planet, famous for their high concentration of omega-3 and ability to stop cancer. This smoothie takes the nutritional properties of this wonder food and transforms it into a delicious drink. For the smoothie, you’ll need 1 tablespoon of chopped fresh ginger, 2 tablespoons of flax meal or ground flax (I use Bob’s Red Mill’s or Anthony’s), 1 cup of orange juice or two oranges, 1 cup of carrot juice, and two cups of fresh peach slices. Simply blend all of the ingredients in your blender. The result should be a thick, creamy and fiery smoothie that helps you wake up in the morning. 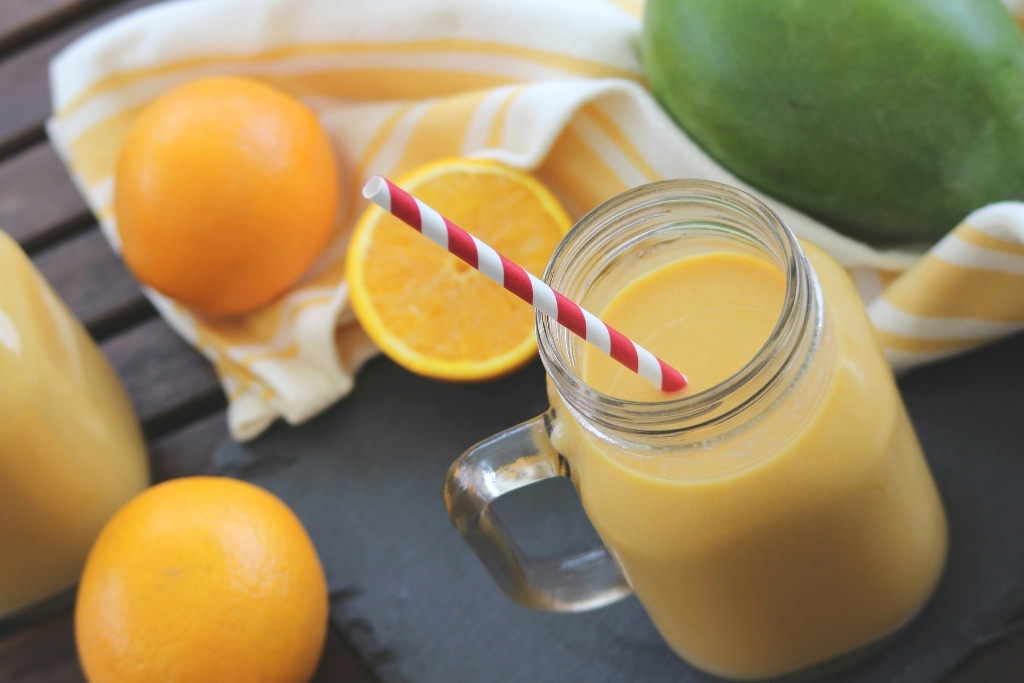 If you’re looking for something refreshing and comforting, then you might want to try your hand at making an Indian lassi smoothie. (When we lived in Berkeley, Mr. Misadventures and I would walk over to Vik’s Chaat House for their mango lassi, love this!) For this, you’ll need a ripe banana, peeled and cut into chunks, some ice-cold water, low-fat plain yogurt, honey, and a quarter teaspoon of rose water. Add all of the ingredients to a blender and then add a pinch of nutmeg. The result is a white smoothie that looks a little bit like regular milk, but oh-so-tasty!

Last, but not least before moving on to bowls, we have the matcha smoothie. I love matcha! For those of you who don’t know, matcha is a type of powdered young green tea leaf. It’s super high in antioxidants and has all sorts of purported health benefits. For instance, it’s high in EGCG, a type of plant called catechin which may play a role in protecting your cells from damage and preventing disease.

To make a matcha smoothie, add plenty of fruit. Start with half a cup of banana and half a cup of peach. Then add a cup of fresh spinach, 1 teaspoon of maple syrup (I use the one from ChocZero because it is low carb), and ½ cup almond milk. Blend the whole lot together, adding 1 to 2 teaspoons of matcha, depending on your preferences. You should notice that the smoothie has a gentle tea-like taste, but it is not overwhelming. 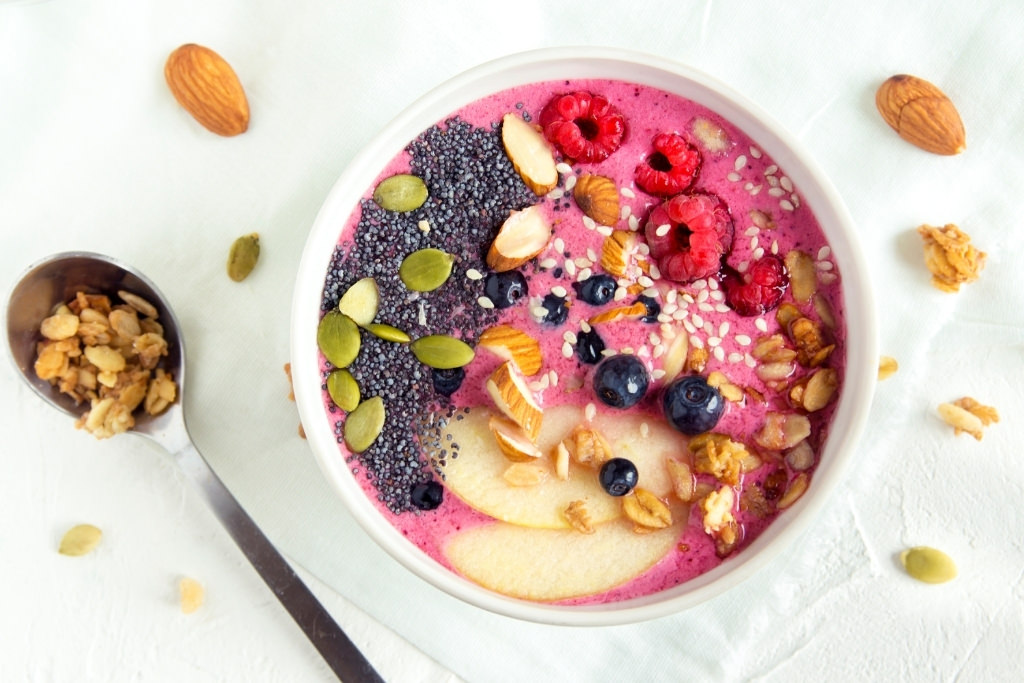 Smoothie Bowl With Berries And Almonds

Eating a rich breakfast is one of the best ways to start your day. And you can make the whole enterprise entirely smoothie-based if you want. The way it works is easy. Just create your favorite smoothie, following a recipe. Then, instead of pouring it into a cup, decant it into a bowl and add berries, and almond flakes to the top. It’s that simple!

Most smoothies are vegan. But this one is a little extra plant-based, thanks to the sheer variety of ingredients it contains. To make a vegan smoothie bowl, you’ll need a teaspoon of chia seeds, a tablespoon of coconut flakes, a tablespoon of sliced roasted almonds, half a kiwi fruit, ¼ cup of pineapple chunks, half a cup of unsweetened soymilk, 1 cup mixed frozen berries, and 1 large banana.

To make this bowl, put all the ingredients except the kiwi, coconut, almonds, and pineapple in a blender and whip it up. You should end up with a bright purple-looking smoothing. Then simply sprinkle the remaining ingredients on top in an attractive fashion and you have your first-ever vegan smoothie bowl.

With all of the benefits that come with a smoothie, it’s no wonder they’re so popular. They can be made in just minutes and are an easy way to make sure you get your daily dose of fruit and veggies. Plus, there are lots of different ingredients you can use to create delicious combinations for an endless variety of flavors so they don’t have to be boring! If you’ve been putting off making your first smoothie because it seemed too complicated, I hope these simple recipes will help make the process easier for you.

Get started today by incorporating one new ingredient into your next smoothie recipe!

How about you? Are you a fan of le smoothie? What’s your favorite flavor? Got a recipe or ingredient to share? Do tell! 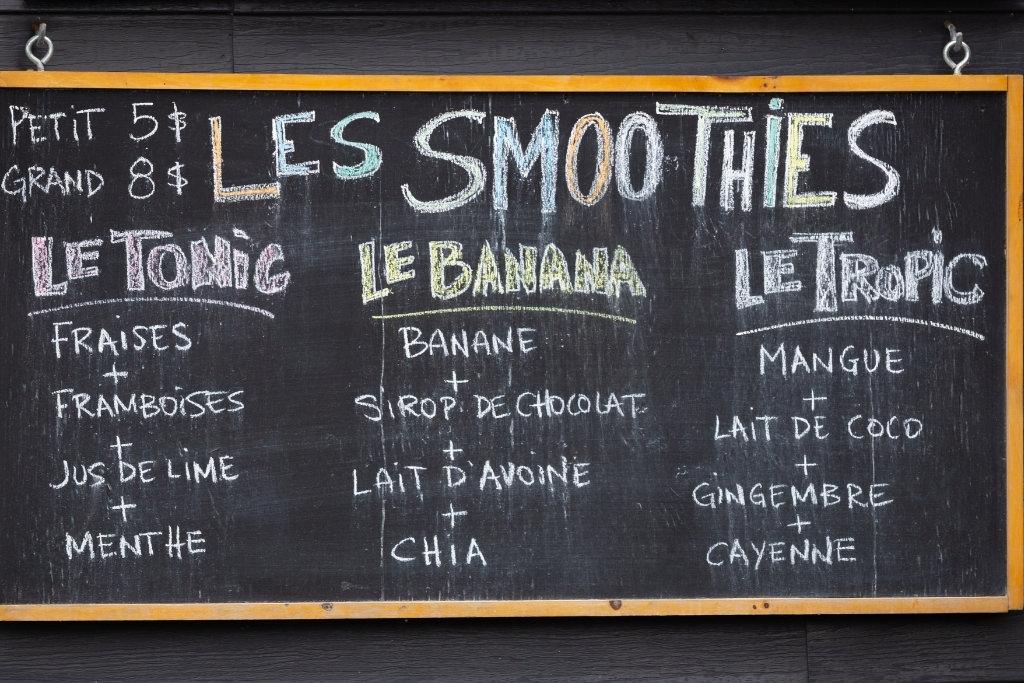 And if you are visiting Paris and want to grab one while checking out the city of light, try these locations for the best smoothies in Paris:

Oh wow! I will have to try this recipe. Thanks for sharing! Looks really delicious and healthy as well!

Love the idea of French Toast flavor Smoothie! I would like to wake up with it!

We love avocado smoothie and we usually serve it sweet. Sometimes, we make it into a shake or even ice cream. Yup, avocadoes here in my country are prepared sweet.

Ohh!! They look so great! How I wish I can taste them right now!