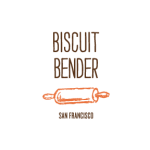 I really wanted to call this post “Bended Like Biscuit” but then I reconsidered as I would be the only one who thought that was funny! Instead I called Biscuit Bender an attraction. Why? Because it is much more than another food stand in the San Francisco Ferry Building but rather a little culinary adventure with a entertaining host.

I first learned about Van Dao and his San Francisco based biscuit business while watching Chopped. Van was a contestant from my neck of the woods, and I always support hometown peeps, so naturally I was rooting for him. After watching his bio I bookedmarked his website so that I could find an opportunity to try his biscuits.

Despite the fact he went home in the first round I was in love. Not only is it difficult to even attempt Chopped with only a pastry background, but he did it with style! Besides baking unique biscuits, Van creates unique hats one of which he wore on the show and certainly grabbed my attention!

In early September, several of the San Francisco food blogs announced that the Biscuit Bender would have a permanent kiosk in the Ferry Building. I tweeted my excitement and filed the information away for the next time I was on the Embarcadero.

Well last weekend after our ritual Sunday dimsum we decided to enjoy the gorgeous weather and walk over to the Ferry Building to have a look around. I told Mr. Misadventures that we had to seek out the biscuits or else. When it comes to food it is not hard to convince my hubby to agree (we are like two peas in a pod) and we tracked down the stand and the charming Mr. Dao, resplendent as usual in a darling hat (and smile)! 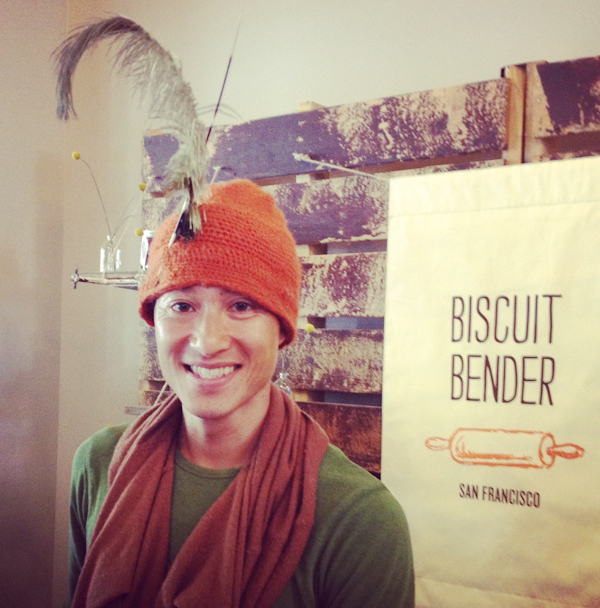 Ever since I first looked up the offerings on the Biscuit Bender website I have had the double bacon-maple biscuit on my mind. So that is exactly what I picked up after my quick visit, along with a bottle of bacon-bourbon and watermelon-ice tea jellies. I took my treasures home and did a little tasting.

I love Southern food, fried chicken is my all-time last-meal-wanting food and along with that comes a good biscuit. So I had big expectations. I used the biscuit tasting as an opportunity to practice more photography with the help of the real photographer in the house. As I was plating the biscuit for photographing I was worried that it looked a little dry, but once the photo session was done and I sunk my teeth into, all fears were alleviated. 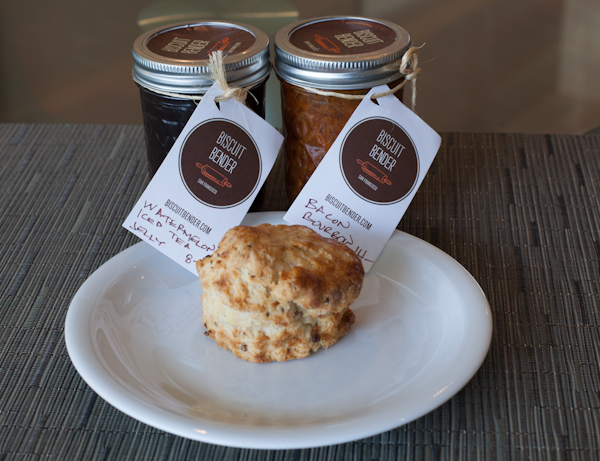 It was a bite of perfection. I tried it first with the watermelon and ice tea jelly. I could not taste watermelon and think this jelly flavor will probably go better with another biscuit flavor or alone with cheese. Then I tried the biscuit with the bacon-bourbon jelly and all I can say is WOW! I thought it would be too much bacon flavor, but I don’t really think there is such a thing! The jelly on the fluffy bacon biscuit was a perfect pairing and the sweetness of the maple still comes through – I thoroughly enjoyed it and am definitely up for trying some of Van’s other flavors. I’ve got my eye on the corn-jalapeno next! 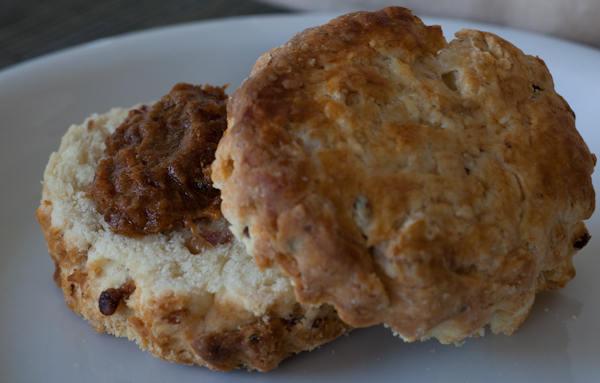 So if you are ever at the Ferry Building in San Francisco, please take the time to check them out. The biscuits are individually sealed and travel well. I guarantee you’ll love them! I know the people of San Francisco do…7×7 magazine just names them one of four fabulous biscuits you can get in the city!

How about you? Are you a fan of a good biscuit? What is your favorite style?

Your means of explaining all in this post is in fact fastidious, all can effortlessly understand it, Thanks a lot.

At least you can say you tried it.

Those look amazing! I wish we had more unique places like that in NJ.

@Kristen, I am sure you must! It is amazing what you find when you go looking! Jersey is fascinating to me when I see spots on the Food Network that cover their restaurants!

I'm obsessed with biscuits! One of my favorite foods growing up (And today) is biscuits and gravy. I prefer them savoury rather than sweet, so I think that bacon-bourbon jelly would be just the ticket.

@Beeb, love biscuits, don't often eat them with gravy, but that's because it is hard to find good spots that do it around here!

My mouth is watering! There is nothing like a good biscuit, and those jellies sound wonderful. Such unique flavors.

@Debbi, they are truly yummy!