Skip to content
After falling in love with the medieval village of Dinan and the medieval port of Saint-Malo on our 10-day trip to Brittany France, we wanted more. We were completely charmed by these towns that had whole sections still preserved from the Middle Ages. Thousands of years of history and so many layers of stories kept luring us in. We had Fougères on our itinerary but I wasn’t prepared for just how the massive Chateau de Fougeres was! As usual, the weather in Brittany during spring provided a challenge. Our early morning spent exploring the chateau and surrounding medieval quarter including Place du Marchix and then even getting up and down the hill to see the view from St Léonard’s church we pretty much had blue skies until right before we left and the clouds darkened and the rain started. The hours we did get in were enough to have us enchanted by yet another beautiful medieval village.
Some posts on this site contain affiliate links, meaning if you book or buy something through one of these links, I may earn a small commission (at no extra cost to you!). Opinions are always my own and I’ll never promote something I don’t use or believe in.
Fougeres has 2 parts: upper and lower. We spent the vast majority of our time in the lower section where the castle and medieval quarter are. The second part is the up the hill from the chateau and it is newer (still 18th century) because it was rebuilt after a massive fire. The visitor center (2 Rue Nationale) is in the upper part, so is the main shopping (on Rue Nationale where there is also a 14th-century belfry, the oldest one in Brittany). We didn’t see any shopping in the lower part but did see some restaurants. We climbed to the upper part from the back side of St Léonard’s church for the view and then walked through the Place du Theatre and back down the hill to our car where it promptly started raining! I’ll walk you through where we visited.

The Chateau de Fougeres (or castle) is more than 1,000 years old! It was built on a rock between the 12th to 15th centuries and was sheltered by hills and surrounded by the Nançon River and marshes. The river created a natural moat that exists today, we even saw an elderly lady fishing out of it! The chateau has 13 towers which have ramparts connecting them. It had a lot of strategic importance because Fougères is at the crossroad of 4 regions: Normandie, Brittany, Maine, and Anjou. Its location was at the old border area between Brittany (before it was annexed to France) and France where big and small fortresses were built as protection by the Duchy of Brittany.

What I was impressed with was how intact it is and how the surrounding grounds and gardens are incorporated into the residential area neighboring it. I also liked the different discovery trails and walking routes signage around the chateau and around town. Lots of city’s fail badly with their signage, but not Fougeres! 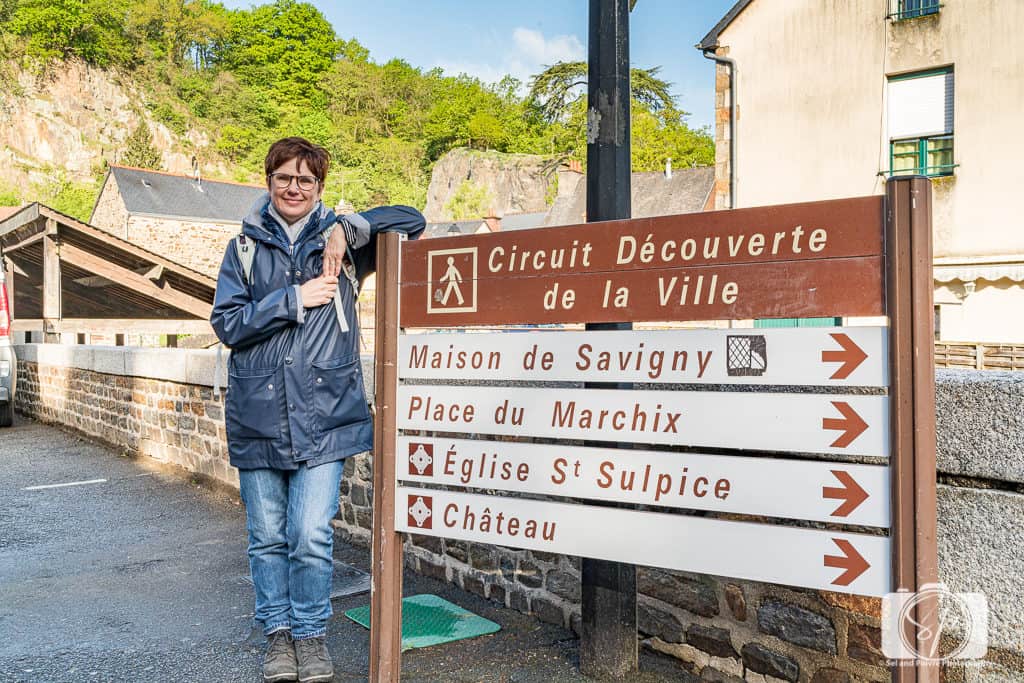 If you are walking downhill on the backside of the chateau on the Rue del la Fourchette and follow along until it meets Rue le Bouteiller look for a small opening where you can walk into a little courtyard to see the water system flowing along the castle wall that was used for milling, etc. It’s pretty cool. Look at the first photo and the last. We were there for about 15-minutes and that was our last 15-minutes of luck before the rain came!

We walked around the entire chateau but did not go inside as it wasn’t open yet. The City of Fougères has done a really great video of what the outside of the Chateau de Fougeres looks like:

Chateau de Fougeres opens at 10:00 every day and closes at different hours depending on the month, you can see their hours listed on their site. A tour is 8 Euros for adults and there are children and family packages as well. You can explore on your own which takes about 90 minutes or a 45-minute guided tour.

The rest of our visit involved wandering away from the chateau, into the medieval quarter up to Saint-Leonard Church. Here is the path we took. 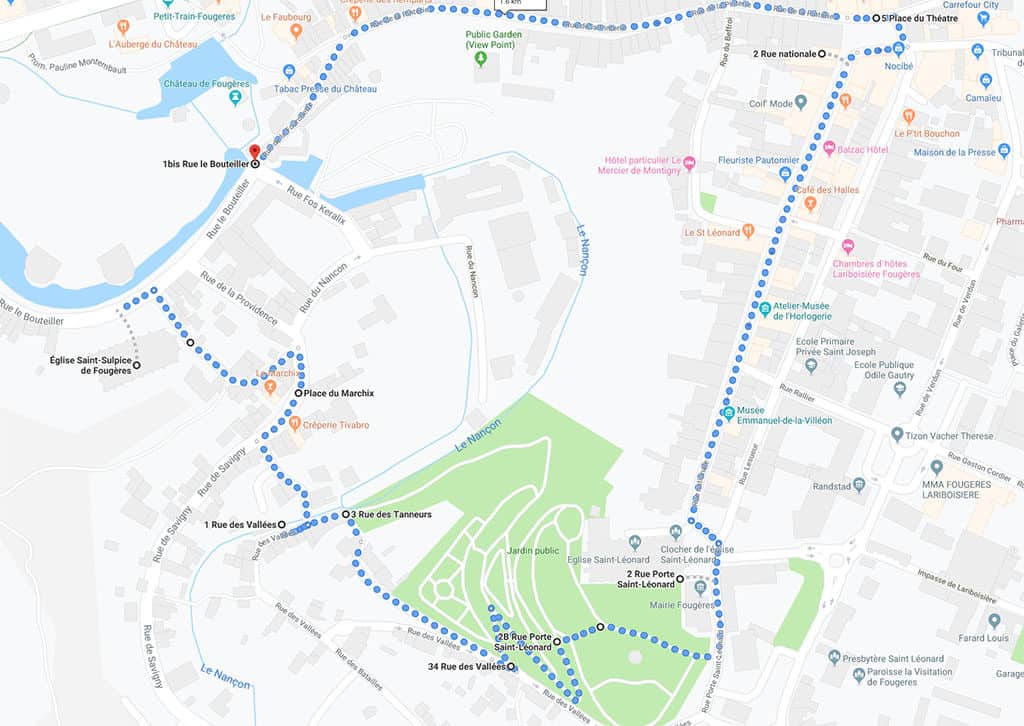 After circling Chateau de Fougeres, we walked past the church of Saint-Sulpice (Rue le Bouteiller) which was built between the 15th to 18th centuries and followed the Rue de Lusignan towards the Place du Marchix. The Nançon River was used by cloth-makers, dyers and tanners, and then shoemakers. Tanning was a by-product of cattle-breeding which was the major economic activity during the Middle Ages. The cattle were sold at the Place du Marchix, but you wouldn’t know it from looking at it today, the area is now residential with half-timbered houses, mansions, and gardens. It’s quite beautiful and the wisteria was in bloom when we visited. 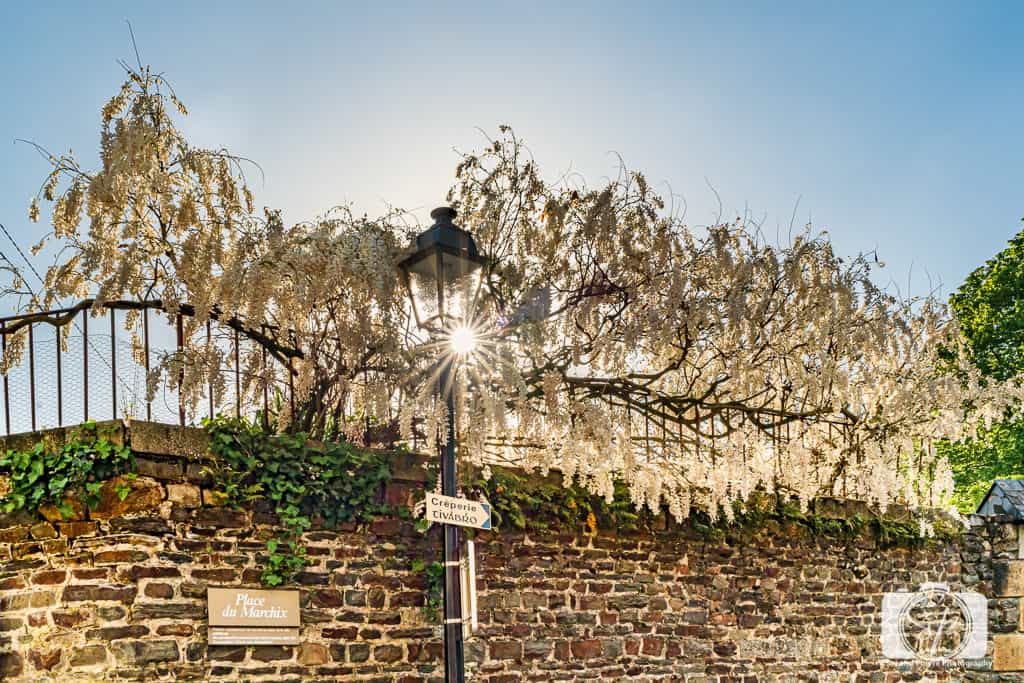 From there we wandered through the streets admiring the half-timbered houses. These medieval homes have their frames, studs, and beams on the outside. The ones in Fougeres were built between the 15th and 18th centuries.

Rue des Tanneurs was where many of the tanners lived because they used the river water for their work. Walking through I could imagine people from the Middle Ages, washing, cooking, working by the river. 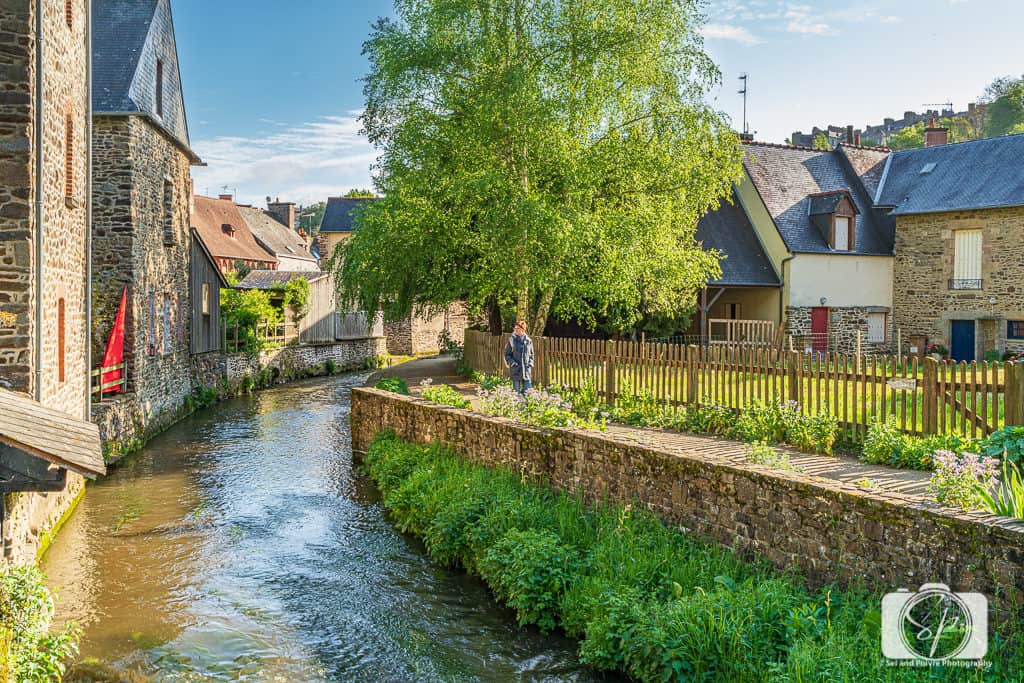 We took a little path along the river to check out more homes before circling back to the Rue des Tanneurs and the Duchess Anne Staircase or as I called it Balzac’s staircase.

Fougères has a lot of literary ties. The city is also connected to the 18th-century writer and father of Romanticism François-René de Chateaubriand, whose sisters lived in the town. Chateaubriand was born in Saint-Malo and was raised in Brittany. His sisters had stone mansions in Fougeres at 3 Rue Leseur and 18 Rue Chateaubriand. There is a literary circuit walk that you can follow and see locations that inspired authors. These authors include Victor Hugo, who wrote Les Miserables in Fougères with the help of his mistress and muse, Juliette Drouet (also known as Juliette Gauvain) whose own personal experiences contributed to the book. She was from Fougères. And Honoré de Balzac ( I LOVE Gérard Depardieu’s interpretation of him in the 1999 film Balzac!) who stayed in Fougeres for a few weeks to scout locations for his novel Les Chouans. Locations such as La Vivetière which is actually Chateau Marigny, a property owned by Chateaubriand’s older sister and then the Duchess Anne Staircase became the Staircase of the Queen.

We walked up that staircase on our way to Saint-Leonard church. 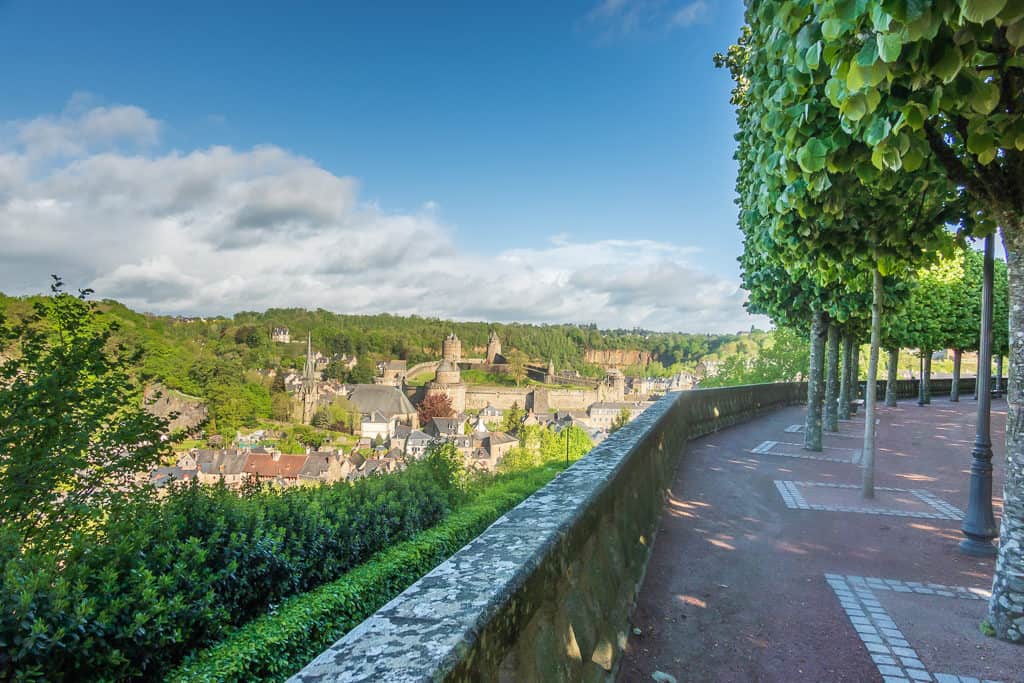 Saint-Leonard church is on the hill and we walked up the pretty Ruelle des 4 Vents until it hit the Rue des Vallées where we entered the terraced cliff and gardened path along the way up to the church. The church of Saint-Léonard was built in the 15th and 16th century and then refurbished and enlarged in the 19th century in a neo-Gothic style. There are exceptional stained-glass windows depicting the life of St Benedict but I never got to see them. I immediately fell in love with the hilltop garden and decided I never wanted to leave.

I could envision myself, medieval dress and all (of course I was a noblewoman), walking along the tree-lined path and flower gardens with my book of poetry in hand pining for my knight or lord. The Place aux Arbres is a public garden and has a fantastic view of Chateau de Fougeres and the medieval quarter below the gardens. Why do churches own all the best land? Wait. Don’t answer that. No politics or religion here.

We exited the church from the street and walked along the Rue Nationale until we made or back around to the Rue de la Pinterie and the Rue le Bouteiller where we stopped in the chateau’s mill before getting rained on. We made it back to the car just in time!

How to get to the Chateau de Fougeres (and Fougères)

Fougères is a 3-hour and 20-minute drive from Paris on the A13 Autoroute. It will cost you about 35-40 Euros in tolls before you eventually find yourself on national and departmental roads.

There is no train service directly to Fougeres. But there is an option with a train/bus combo. There is a TGV from the Gare Montparnasse (Paris) that goes to Rennes, the capital of Brittany where you make a quick transfer to a bus for a 1-hour ride to Fougeres. Check out OuiSNCF for schedule information.

Places to Visit Around Fougeres

Since Mr. Misadventures is a huge fan of photography and I know he is not the only one, I think it is also kind of cool to note that once the Industrial Revolution hit Fougères the intricacies in making fine leather shoes (similar to eyeglasses and watches in the Jura mountains) started transferring to glasswork and workers developed the meticulous know-how which led to pioneers such as Carl Zeiss who opened a laboratory in Fougères dedicated to the glass digital machining for lenses!

Photos that were taken by me were done so on an iPhone and Sony Cybershot RX100. If you mainly use your camera on “Auto” this is the camera for you (and me!). I use 3 accessories: a Sony VCT-SGR1 Shooting Grip; and 2 straps: the Peak Design SLL-AS-3 Slide Lite Camera Strap, and the Peak Design CL-2 Clutch Camera Hand Strap. I used my red Osprey 18 backpack (the closest thing to it) to carry it all. For the photos taken by Mr. Misadventures (anything with a Sel & Poivre Photography watermark), the real pro in the household, he used his Sony A7RIII and the following lenses: Sony FE 12-24mm and Sony FE 35mm. Under each photo, we have provided the lens and aperture information. His camera equipment was carried around in a MindShift Gear BackLight 18L backpack.

How about you? Have you been to Fougères? Or other parts of Brittany in France? Do share! If not, have I inspired you to visit? Do tell!