Leaving Beijing I was thinking about how I felt about my trip and the only word I can come up with is “sad.” Similar to my experiences in the Shanghai and Suzhou areas where I spent many weeks, I met wonderful, interesting and vibrant local people, but also similarly, my impression of Beijing is that is is a city where the people are desperately trying to hold on to centuries of history while they are being pulled into a shiny new future. Also, visiting Beijing in the winter with temperatures below zero might also have had some impact on my impressions.

Over several days between business meetings and travel, I had the opportunity to do two half-day tours to see just a small piece of this historic capital city. My colleague whom I was traveling with spent one year here as a university student, but as that was more than ten years ago, he too was practically seeing everything as if he had not seen it before. The changes were that extreme.

We enlisted the services of a private tour guide whom we spent our two half-days with. We informed her that although it would be nice to see some of the “big sites,” we were mainly interested in seeing local life, whatever life in the freezing cold in the middle of winter in Beijing would be! For our first half-day, we met our guide, Judy at our hotel and took off to eat lunch.

Knowing a little about the food from the area, my colleague suggested one of his favorites styles from the Xinjiang province an autonomous region (like Tibet) where people from the nomadic Uyghur ethnic minority provide much of lamb for the Chinese as well as some great bread, noodles, and spices. Judy was nervous and kept asking if we were sure if we wanted to go eat that food at what would be a really small restaurant. Apparently, she had had bad experiences with Americans who would not eat at these small restaurants as they were viewed as unclean, etc. We kept ensuring her that was exactly what we wanted (damn those Americans who give Americans a bad name!).

Finally convinced, we arrived at a tiny restaurant, which was only a few blocks downs from the hutongs where Judy lived. We reviewed the menu, every dish depicted in photos, although we already had in mind what we wanted to eat (or a least my colleague did). As soon as we finished ordering our food began arriving. It was wonderful. The food from this province is hearty and tasty. I can’t tell you the English names as everything was in Chinese, but I can share photos. Our chef grilling our lamb: 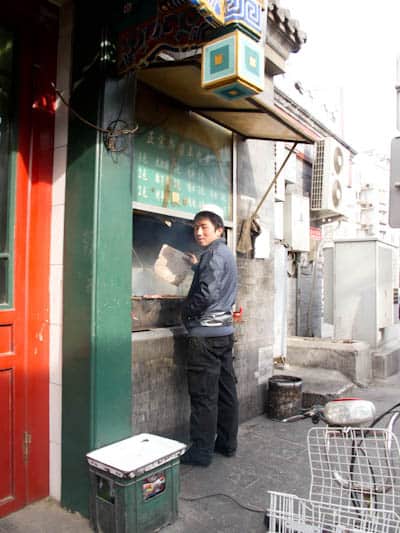 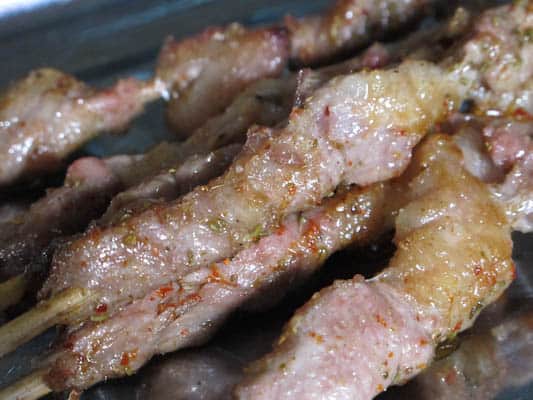 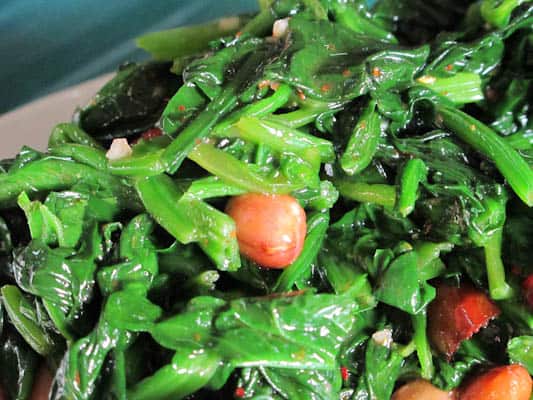 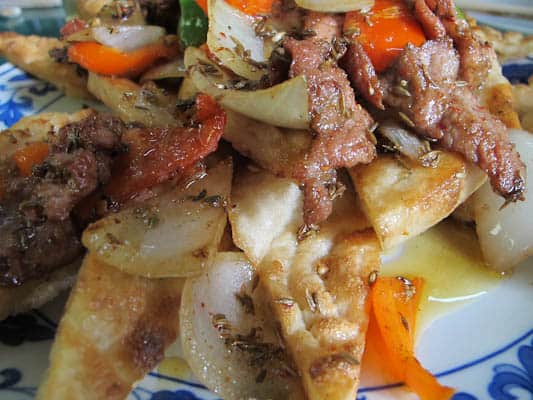 A tomato sauce and thick round noodle with chicken and vegetables: 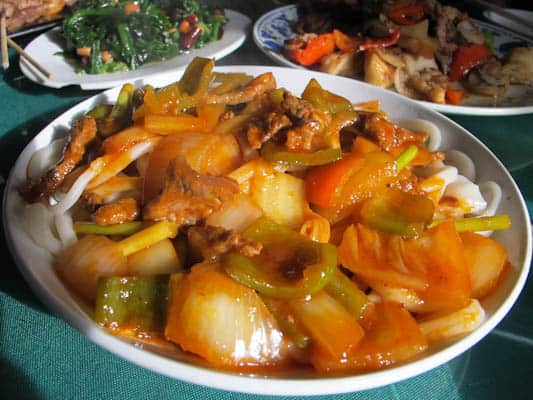 A chicken and potato with course flat noodles in a sauce that I believe had turmeric and cinnamon – heavenly! 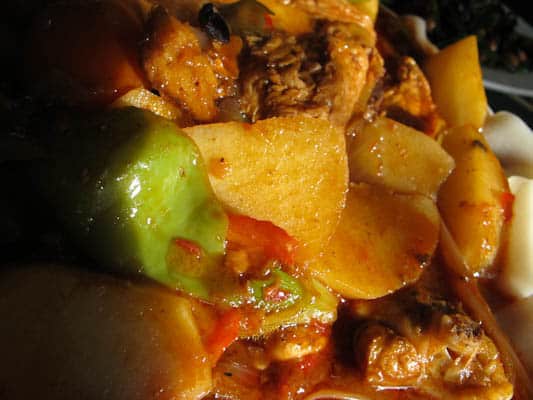 Filled to the brim with lamb, noodles, and beer, we headed out of the city to the old summer palace, which is part of a beautiful park near Peking/Beijing University. There are actually two summer palaces, both destroyed by the British and French in 1860, one rebuilt and one left in ruins to remind the Chinese people of Western imperialism. We chose to visit the ruins.

Being winter in Beijing, December to be exact, and freezing (the temperature that day was -10 °C / 14 °F) there were very few people in the park and we had it nearly to ourselves. The light was excellent for photography and we walked around enjoying the grounds, the lake, and the ruins. 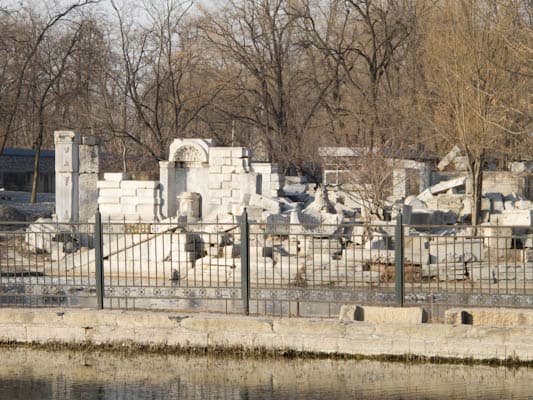 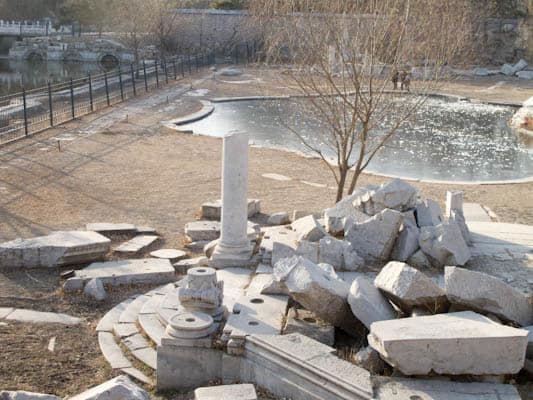 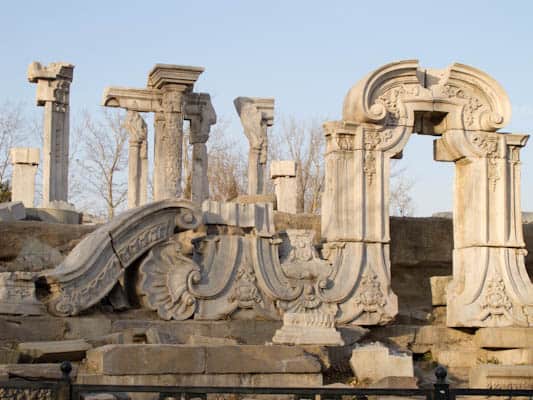 After more than an hour, as we were turning into popsicles and I could not feel the fingers I was using to take photos, we decided to head back into the city to the Drum Tower, which also included an area that still had original hutongs. The stairs leading up to the Drum Tower was nearly the death of me as you can see from this photo:

But the climb was worth it as the view it afforded was outstanding and we were just in time for the drum show. As we were the only ones there it was like a private showing. My colleague had been before and was only able to see a part of one drum, as it had been too crowded. This time we got to see the entire thing. The drums were used in ancient times to tell time as well as some of the emperor’s movements. They were also part of the opening ceremony for the 2008 Olympics. I can tell you to be alone in that room when the drums start is an exhilarating experience.

Luckily I had the foresight to record the show with my camera, and I gladly share it with you here:

We descended the stairs and headed into the hutong to have a look around. It was getting dark (and colder) but we spent a little time walking around. Hutongs are narrow streets alleys where people live in tiny places called siheyuan, traditional courtyard residences these are all joined together in a community-style of living. There are no bathrooms in the living spaces so a toilet facility is required no more than 50 meters (164 feet) away. We went into a local grocery store where the neighborhood people shop for their daily food needs. I found it to be similar to a small farmer’s market in Europe and many parts of the U.S., but for these people, it was just “food.” Vegetables with the earth still on them spices bought in bulk, people purchasing just the small amount they might need for the evening meal. No need for organic, as everything is farm fresh. 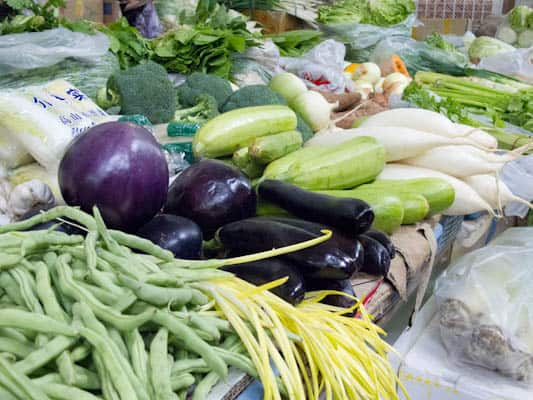 This is what most of Beijing used to be like. Small neighborhoods with close-knit communities in ancient buildings. But today these are the minority; the few that exist are fighting tooth and nail to not be torn down, forsaking modern conveniences for ancient traditions. It is a fight that has been lost over and over and it is uncertain how long these will stand.

I feel honored to have seen this “old” Beijing first-hand, to have walked through a small piece of one of the last few neighborhoods like this that remain standing; to have spent time with one of its residents, someone who hopes to hold on to the thin strings tying Beijing to its past but sees that they are quickly unraveling.

Honored, but very, very sad. How much will be left for the next generation to learn from?

The day before I departed from Beijing I had the opportunity to spend a second half-day seeing a part of the city. This time we took the subway and met Judy near the Forbidden City. The subway ride was quite an experience and it reminded me of my first commute-hour ride in Tokyo. The traffic situation in Beijing is horrendous, but the public transportation isn’t much better. The problem is simply – too many people.

We managed to jam or rather we were pushed into a car where we rode like sardines until the station where we needed to get off. We found Judy and decided to head to Qian men Emperor’s Avenue for lunch first. Our destination was Duyichu restaurant where we intended to have our fill of dumplings. Specifically Shaomai, dumplings shaped in the form of a lotus flower.

Considered the oldest restaurant in Beijing, Duyichu got its name from Emperor Qianlong. He was returning from a trip outside of the Forbidden City, but before he reached the city he grew very hungry and wanted to stop for food. The only place open was Duyichu, although it really had no name. The emperor stopped, ate and declared it very good and the “The Single Place of the Capital,” and that name has stuck. Three hundred years later it is still there and still serving the same dumplings.

We ordered baskets of pork, lamb and vegetable dumplings. When they came (a basket of 10!), I noticed a few things about them. First, they were shaped like flowers, lotus flowers to be exact. They were larger than your average dumpling and drier. No matter though, they were damn tasty and the three of us demolished them all! Pork, lamb, and vegetable: 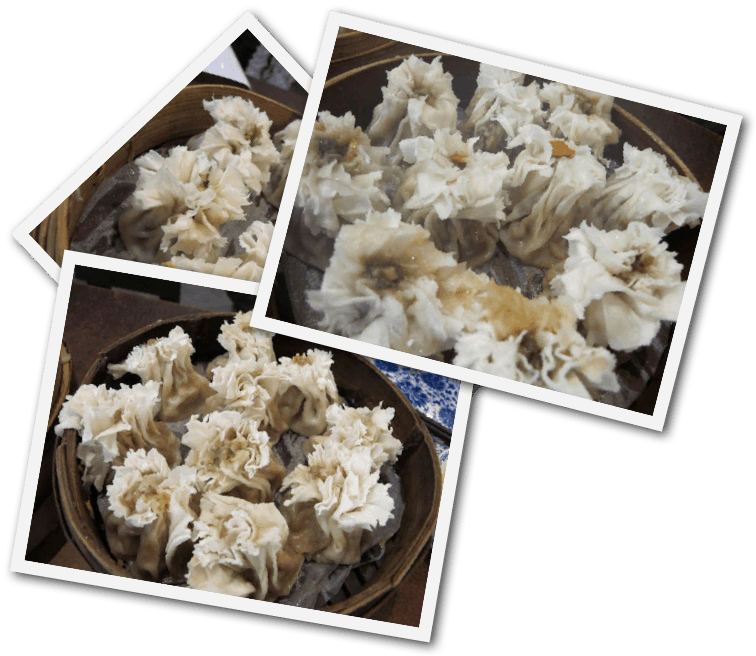 After lunch, we walked around a little bit, but my colleague and I were too depressed at the site. The powers that be had torn down this historical market area and rebuilt it so that Nike, and Starbucks, etc could move in. We were able to get a small glimpse of an original silk store, shoe store and pharmacy as well as some of the original alleyways that were hidden behind the shiny new buildings, but the site of all the new luxury stores was depressing and we quickly moved on.

Moving on meant crossing the street into Tiananmen Square. We walked through a security point and then were inside. It is the largest square in the world, and unless you are of a certain age, you would know nothing of its bloody history.

Even our college-educated tour guide who looked to be my age did not mention one single word and quickly expounded all the other historical details of this square glossing over its 1989 events. No matter, I was not there to judge, only to see the famous square and ancient residence of the previous emperors.

We crossed the square, crossed the street and entered the Forbidden City. You need at least three whole days to see the entire city, and later when I tried to take a picture of the entire area I could not get it all into one shot (I needed Mr. Misadventures and one of his many lenses to assist). We walked through all the gates, stopping here and there, in sun patches if we could, as the temperature was – 12 °C / 10 °F. I was wearing a t-shirt, a sweatshirt and a sweater on top followed by a Patagonia jacket; a double set of gloves; a wool hat and my jacket hood; tights, thermal underwear, and jeans and fur boots and I was still cold!

The sun was beginning to set, we made it through all the gates and headed to one last spot, the Prospect Hill where we would have a panoramic view of the city. We braved the wind and the steps and reached the top just as the sunset was beginning.

Once again I felt sad. Sad that a country that had produced such a rich history, a society one that had constructed the beautiful buildings that sat below my feet was slowly losing itself. There is something to be said for other ancient cities such as Rome where they have been able to retain the old and still build the new, a balance of celebrating the past yet embracing the future.

I think someday the Chinese government may look back and regret that they have lost large chunks of their heritage, pieces that they will never be able to recreate again, a history that future generations will not be able to share and understand and they will feel sad.

How about you? Have you visited Beijing? Did you have any of the same experiences? Do share!